When it comes to mimicry of wasps, the flower flies of the family Syrphidae are perhaps unequaled. They are convincing enough that I myself remain prone to being fooled by some of these imposters. Among the best of the best are members of the genus Spilomyia, which not only look like yellowjackets, but even sound like them. 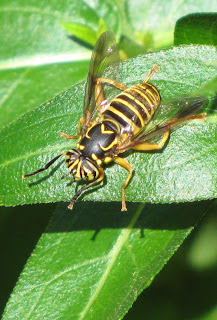 A recent trip to Colorado Springs, Colorado revealed just how easy it is to pull the wool over my eyes. At the Cheyenne Mountain Zoo I had been seeing both Aerial Yellowjackets (Dolichovespula arenaria) and Western Yellowjackets (Vespula pensylvanica) licking aphid honeydew off of leaves on a young aspen tree. One of the “yellowjackets” didn’t look quite right, though, and a closer inspection revealed it to be a fly.

One way I am able to tell flower flies from yellowjackets is by the antennae. Yellowjackets have long, thick antennae, whereas most of the flies have very short antennae with a hair-like appendage called an arista on the very tip. Some flower flies, including those in the genus Spilomyia compensate for this difference by waving their front legs in front of their faces to simulate the longer, thicker antennae of the wasps. 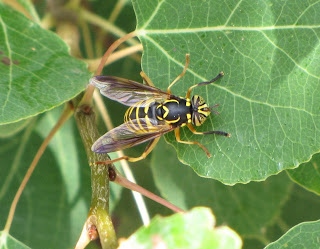 Fine. I can always tell the difference by the eyes. Flies have very large eyes that meet at (males) or near (females) the top of their heads. This should be easy. Ok, wait a minute, exactly where do this fly’s eyes end and the rest of its face begin? Swell. The ornate black and yellow markings on the fly’s eyes now make sense: they break up the outline of the eyes, making them appear smaller than they actually are. 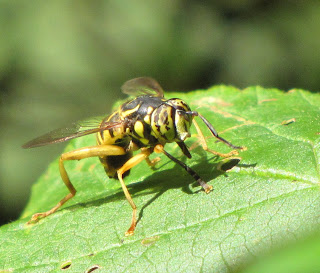 Alright, I don’t give up that easily. Flies have only one pair of wings, while wasps have two. Ha! I got you now. Also, the wings of yellowjackets are folded longitudinally when the wasp is at rest, so the wings appear thinner and darker….Uh oh. This fly actually has the front half of each wing darkened to mimic that fold. Unreal.

The flies are also the same size as yellowjackets, varying from 12-17 millimeters in body length. But, as if visual appearance and behavior are not enough to convince a would-be predator not to mess with the fly, this mimic even sounds like a wasp. The frequency of its wingbeats in flight is nearly identical to that of its yellowjacket model. One has to wonder if any predator or parasite can see (and hear) through this charade.

Flower flies are more than just a pretty face, though. The adults visit flowers, and they can be at least adequate pollinators as a result of this behavior. The larval stages of Spilomyia apparently dwell inside water-filled tree holes, feeding on decaying organic matter. So, they are valuable recyclers and decomposers, too. 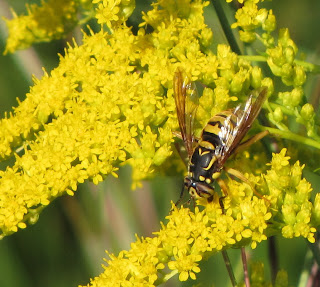 The next time you think you see a yellowjacket in your yard or garden, do a double-take; maybe a triple-take. You might just be seeing a fly in disguise. Spilomyia is a very widespread genus with about 13 species in North America, so chances are good that they are in your neighborhood.