The Brown-spotted Range Grasshopper, Psoloessa delicatula, is one of the smaller of the springtime grasshoppers here on the Front Range in eastern Colorado. I have only seen one so far this year, but considering it snowed yesterday, May 1 (yes, that is not a typographical error, it really snowed on May Day), I can’t be too surprised by their lack of abundance. 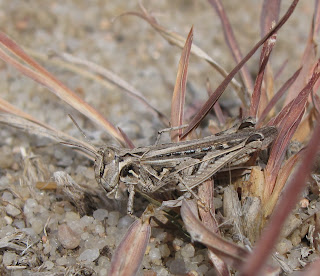 Mature females of this species are only 16-27 millimeters from head to wingtip, males 18-20 millimeters. As if size alone doesn’t make them hard enough to spot, their ornate crisscross markings render them nearly invisible among the tangles of short grasses they like to dwell in. One way I recognize them most easily is by the large brown triangle on the top of each hind femur (“thigh”), that is clearly visible when looking down on the insect. Even nymphs have this marking. 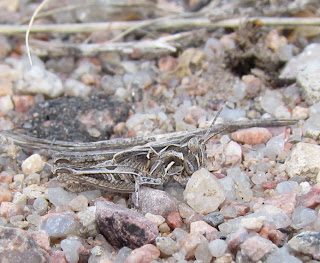 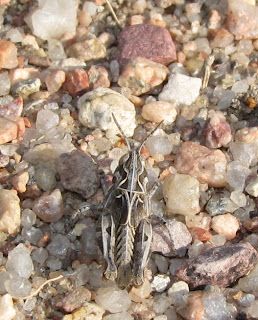 Psoloessa delicatula is nearly identical in appearance to the Texas Spotted Range Grasshopper, P. texana. There is almost no reliable way to separate the two in the field without capturing a specimen and examining it very closely. Still, David Ferguson, an expert on Colorado grasshoppers, tells me that the Brown-spotted Range Grasshopper is decidedly more robust, or “stockier” as he puts it, than its Texas counterpart. That is perhaps no help if you have not seen both species, and/or you are looking at a female of one and a male of the other. Female grasshoppers are definitely the more robust gender.

The Brown-spotted Range Grasshopper is common from south-central Canada to northern Mexico, and eastern Washington, Oregon, and California to the Dakotas, Nebraska, western Kansas, the panhandle of Oklahoma, and western Texas. The Texas Spotted Range Grasshopper is more southerly in its distribution, from southern California east to central Texas and north to South Dakota.

Adults of the Brown-spotted Range Grasshopper are most abundant in May and June over most of its range. Eggs are laid in barren soil in mid-summer, and the nymphs overwinter. They emerge again in April to finish maturing, having only one or two molts left before reaching adulthood. In central Saskatchewan, this species has a two-year life cycle. 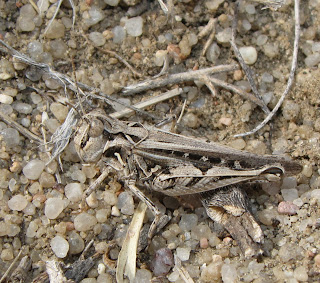 Populations of this species vary with winter survivorship of the nymphs, but seldom if ever become problematic to ranchers and farmers. The insects feed exclusively on grasses and sedges, but do not eat enough to deprive livestock of forage.

You may have to flush one of these grasshoppers numerous times before you can find where it landed after its short flight. They are incredibly cryptic. Good luck!