Happy Valentine’s Day! No matter whether you, or any other person, loves insects, there is no question that they love each other. There are few things arthropods are better at than procreating, so on this day of love why not celebrate their courtship and mating? 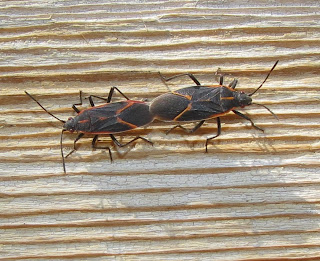 True bugs like the Eastern Boxelder Bugs above, often mate “tail-to-tail.” It is one way to differentiate them from beetles, which usually mate stacked up, the male on top. Take the two tiger beetles below, for example. 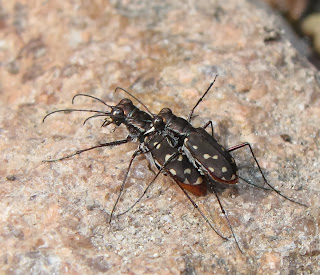 The video below shows a pair of blister beetles (genus Epicauta) that I found here in Colorado Springs. The male is in the rear, rocking back and forth and literally tickling the fancy of the object of his affection with his antennae. You’ll have to add your own sound track, maybe Barry White or Marvin Gaye. Ooooooh....yeah. 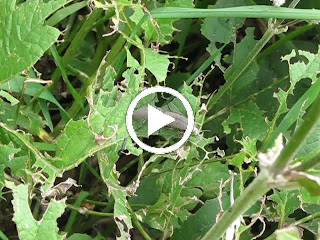 Butterflies, like most insects, rely heavily on pheromones to attract the opposite sex. Pheromones are species-specific volatile chemicals produced mostly by the female, but sometimes the male. The picture below depicts a pair of Heliconius hecale in the “Butterfly Magic” exhibit at Tucson Botanical Gardens. The female is perched on the leaf while the male hovers above.

In this case, he is wafting his own pheromones toward her. Unfortunately for him, the posture of the female is the Lepidoptera equivalent of flipping one’s middle finger. Nice try, guy. Better luck next time.

Some male insects have a “hit-and-run” mentality, literally. Male European Woolcarder Bees, Anthidium manicatum, stake out territories around resources used by the females. They will rout any other males, and any other bee species, from a patch of flowers, for example. When a female lands on a flower and tries to go about the business of harvesting pollen….BAM! The male bee forcibly accosts her, mating with her whether she wants to or not. The session ends after only a few seconds. 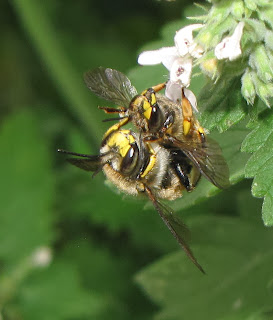 Among the more gymnastic of mating rituals occurs in the Odonata: the damselflies and dragonflies. It still may not be much fun for a female, as the male grasps her tightly around the neck with the claspers on the end of his abdomen. Some dragonflies even end up puncturing the eyes of their mates with the prongs and spurs on their claspers. 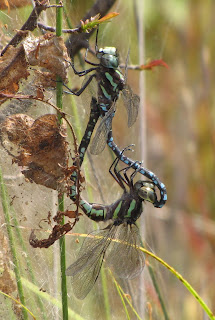 A compliant female will, however, bend her abdomen up to meet the base of her mate’s abdomen, as his sperm duct is located there. A pair of mating damselflies or dragonflies thus forms a “wheel,” often in the shape of a heart. What a fitting image for Valentine’s Day. 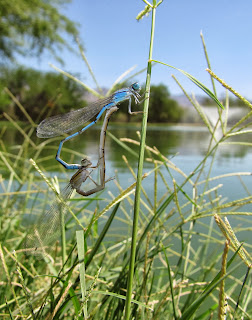