King of the Dung Heap

Some of the most beautiful insects in the world are found under the most disgusting of circumstances. Take, for example, the subject of this week’s “Fly Day Friday.” The Golden Dung Fly, Scathophaga stercoraria, is a common species, especially in early spring and autumn. Unfortunately, it is most abundant around cow and horse manure. 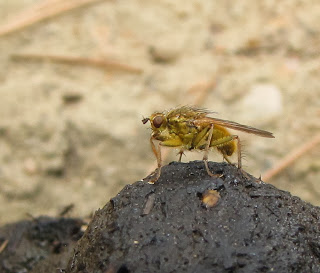 The male fly, about 7-9 millimeters in length, is covered in long, bright yellow or golden hair. The insect positively glows when the sunlight strikes its body at just the right angle. Females are often smaller, and rather dull brown or gray. Males are quick to colonize a fresh heap of dung, many individuals descending on the meadow muffin. The flies are predatory on other, smaller flies that try and compete with their monopoly on the dung.

Females covet fresh scat as food for their offspring, but they first have to endure a mob of bachelors attempting to mate with them. Larger males are usually more successful at copulation than smaller individuals, but in the frenzy they sometimes mistake others of the same gender for females. Males repel such unwanted advances by pushing themselves up on their front and hind legs and kicking the would-be suitor off their back with their middle legs. 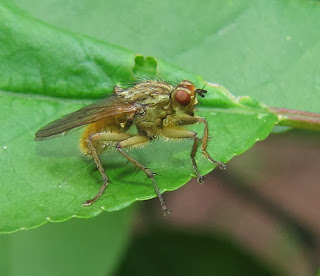 Even after mating a female is usually accosted by other males trying to “get in the last word,” so to speak. The kicker is that the female has three, sometimes four, spermathecae, internal storage chambers for sperm within her abdomen. So, not only is there external competition between male flies, but competition among their sperm, inside the female. Still, the last male to mate with a given female will fertilize about 80% of her eggs.

He often guards the female while she deposits her eggs. According to one study it takes her an average of forty-five minutes to complete oviposition. Manure that dries out, forming a crust, is nearly impossible for the flies to penetrate when laying their eggs, so there is a premium on freshness.

There is a surprisingly voluminous amount of information about the mating habits of this species, which any Google or Google Scholar search will reveal. There are even some online videos, and not all of them R-rated. The flies are easy to observe in the field, and easy to propagate in the laboratory, so they make good subjects for students and scientists, no doubt. 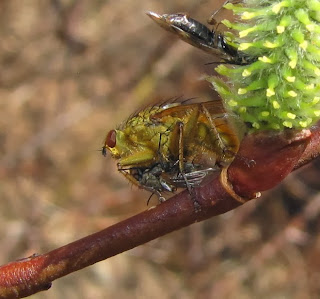 When not engaged in sexual behavior, or searching for poop, dung flies can be found peacefully sipping nectar from flowers, especially in early spring. I often see them on willow catkins, where they will also prey on smaller flies (see photo above). There are several generations of these insects throughout the warmer months, but they seem to be most conspicuous in spring and fall.

The Golden Dung Fly has a nearly worldwide distribution, and is not surprisingly most abundant in habitats frequented by livestock and large, wild mammals. So, forest edges, meadows, fields, farms, and ranches are good places to find them in great numbers. Not that you would want to go out looking for feces or anything…. 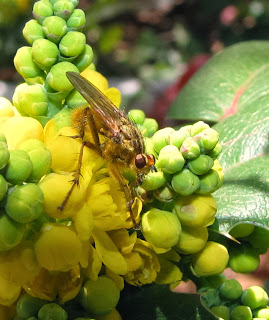