Darkling beetles in the family Tenebrionidae are deceptively confusing. They are so diverse that when I am confronted by an unusual beetle I generally start by ruling out tenebrionids. Within the family itself, many genera are very similar in appearance. Most armchair entomologists think that all the big black ones are in the genus Eleodes. Not so fast, my friend! The genus Coelocnemis, with seven species in the western U.S. and adjacent southern Canada, might be what you are looking at instead. 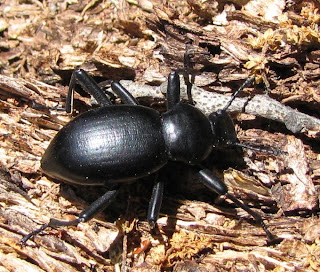 I won’t make you wait. I know you are already asking how to tell the difference between Eleodes and Coelocnemis. In my experience, Coelocnemis usually has a broader, more angular pronotum (top of thorax) than Eleodes, but there is a better character to use in separating the two genera. Coelocnemis has distinct, parallel lines of yellow pubescence (short, soft hair) on the inner surface of the tibia segment on each leg. Eleodes does not have this feature. Indeed, “Coelocnemis” translates roughly to “hollow shin,” describing the groove between the lines of hairs.

Both kinds of beetles lack flight wings, and have fused elytra (wing covers) to help prevent water loss. They actively wander in the cool of the night to further prevent dessication and overheating. 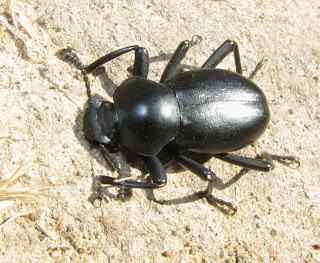 Habitat can be an important clue to the identity of a given specimen as well. While both genera are found most frequently in xeric habitats, Eleodes is more typical of barren, desert ecosystems. Coelocnemis is common in pine forest habitats, or oak-conifer woodlands, where it is usually found in or under rotten logs.

Behavior is not a good way to distinguish the two genera. Both do the “headstand” behavior in self-defense. They both secrete smelly defensive chemicals from glands at the tip of the abdomen that effectively repel all but the most determined vertebrate predators. Grasshopper mice are well-known for disarming the beetles by jamming the bug’s rear end into the ground and then eating the head and thorax. 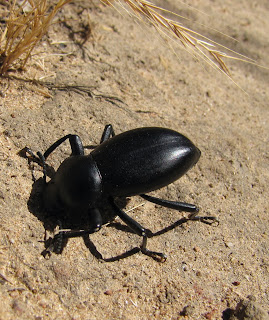 The larvae of tenebrionid beetles are most familiar to us as the “mealworms” we purchase as bait, or to feed captive reptiles, amphibians, and other exotic insectivores. The larvae of Coelocnemis do resemble mealworms, except A.) they are a lot larger in size and B.) they are armed at the rear with a pair of hook-like prongs and a series of much smaller teeth behind the prongs. 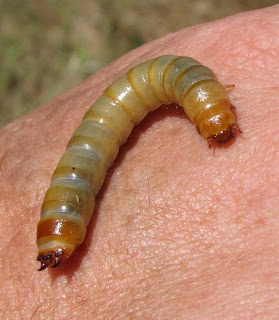 The adult beetles feed on plant detritus, lichens, fungi, seeds, and related matter from which they get precious little water. They are durable animals that can live at least three years. They hibernate in small groups in dry, protected niches.