It takes little to excite me when I am out in the field, but back on July 13 I happened upon a spider that was new to me. My wife and I were hiking in Lovell Gulch, just outside of Woodland Park in Teller County, Colorado, enjoying the mixed conifer and aspen forests at an elevation of roughly 8,500 feet. I seem to recall watching an insect in flight when an orb weaver spider caught my attention. 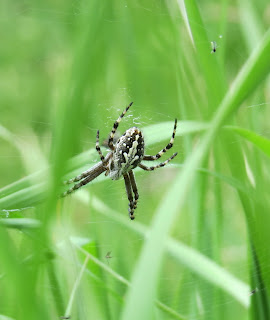 The underside of the spider was most visible as it sat in the hub (center) of its wheel-like web, so I maneuvered as best I could to get a dorsal (top side) view. My initial thought was that this was a spider I had seen dozens of times: the Western Spotted Orb Weaver, Neoscona oaxacensis. Still, something seemed a little bit "off," and sure enough the ventral markings on this spider's abdomen were very different from that of a Neoscona species. 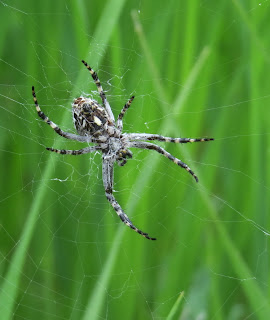 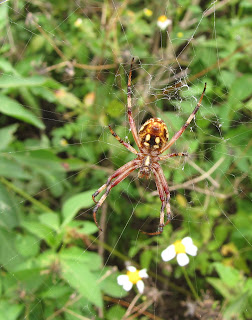 Once I got back home, I tried my hunch that it might instead be a species of Aculepeira, even though I had never seen a specimen before. Indeed it was. It turns out that this genus is pretty much restricted to high elevation, and/or high latitude habitats. The three North American species are collectively found from Alaska and the Yukon Territory to northern Mexico. There are also a few records in the northeast U.S. One undescribed "prairie species" has been discovered in western Washington state.

This one is almost certainly Aculepeira packardi, but it takes a microscopic examination of the genitalia of adult specimens to be conclusive. Note that the species name in older references is spelled with two "i"s: A. packardii. The other two species here are A. carbonarioides and A. aculifera (which reaches Guatemala).

Normally, the adult female spider hides in a silken retreat on the periphery of her web during the day, but this was a mostly cool, overcast day, so she may have felt comfortable occupying the center of her snare. The web was strung between the branches of a very low-growing shrub on a gentle slope in an open meadow.

These are good-sized spiders, mature females averaging nearly 11 millimeters in body length, males about 6 millimeters. The markings are pretty consistent, too, which does help a little bit in determining the species.

Interestingly, A. packardi also ranges in the Russian far east, Siberia, and northern China. In North America, it ranges from the Yukon to Labrador, and south to Chihuahua, Mexico and Pensylvania. 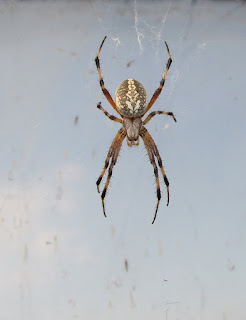 From now on I will always double check spiders that I "think" I already know. It is a good practice, for you never know if you will find something new; new to you, or even new to science. All text and images © Eric R. Eaton 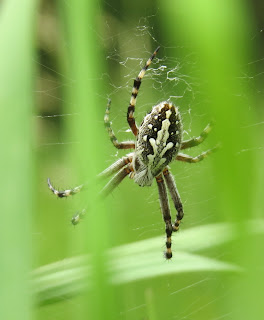