During my stay in Oregon during December and the first week of January, I was surprised to see how many spiders were still active in the relative cold and damp. The most conspicuous of those arachnids were the Missing Sector Orbweavers, Zygiella x-notata, which seemed to occupy the corner of every window frame, outdoor light, or other manmade structure. 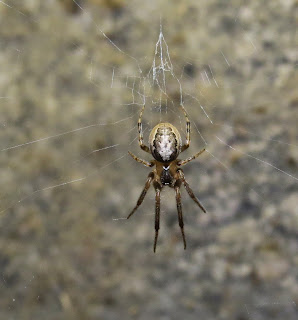 This species is easy to identify, simply from the web alone. It looks as if the spider forgot to finish it. A substantial wedge of the sticky spiral is missing from the top half of the web, the central radius in the sector running to a tubular retreat on the periphery where the spider usually resides. The web spans anywhere between 6-14 centimeters in diameter. 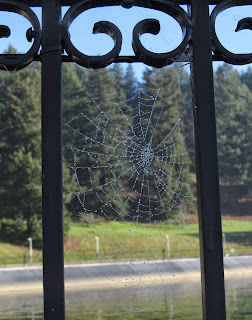 The spiders will come out to sit in the hub (center) of the snare at night, or even on overcast days; and young spiders are more apt to station themselves at the center than older spiders. Adult females measure 7.4-8.7 millimeters in body length, males 6-6.5 millimeters. The color and pattern is pretty consistent across all specimens, as shown in the images here. 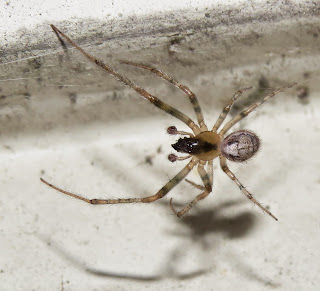 Zygiella x-notata is not native to North America, having been introduced here from Europe who knows how long ago. It is well-established here now, from the California coast through western Oregon and Washington, and also along the Atlantic coast, from New England to Virginia. Another adventive species, Z. atrica, is known from northwestern Washington and southern British Columbia. Z. nearctica is boreal, occurring coast to coast in Canada, plus Alaska, New England, the Rocky Mountains to Colorado, and the Appalachians to North Carolina. 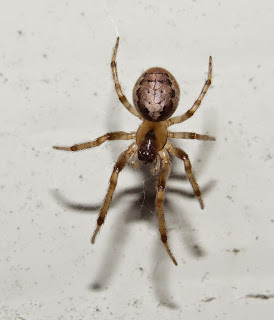 Two native species formerly placed in Zygiella have been reclassified into the genus Parazygiella: P. carpenteri with a disjunct occurrence in the Sierra Nevada mountains, California coast, and also southeastern Washington; and P. dispar from southern British Columbia to the vicinity of Monterey, California (though this is a holarctic species also found in Europe). P. carpenteri usually spins a complete orb web. 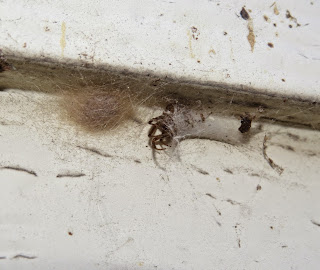 Back to Z. x-notata. It is also known under the aliases of "Winter Spider," "Opensector Orbweaver," and "Silver-sided Sector Spider." I recall this species being most abundant along the waterfront of the Columbia River when I was a child, but it is now among the most abundant of spiders even up in the hills of southwest Portland. It certainly associates itself with buildings, bridges, docks, and other structures.

What would these spiders feed on during the winter months? Many moth species fly throughout the colder months in the Pacific Northwest, plus winter crane flies, other dipterans, and some beetles. Orbweavers often crowd their snares around outdoor lights to further improve their odds of catching a meal. 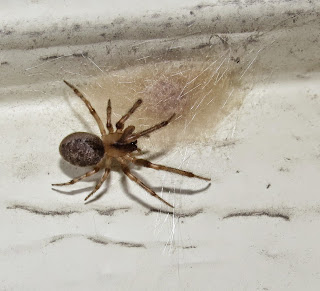 Keep exploring during the winter months, even if it is only around the exterior of your home, office, or other building. You might well encounter one of these spiders, or any number of other organisms. 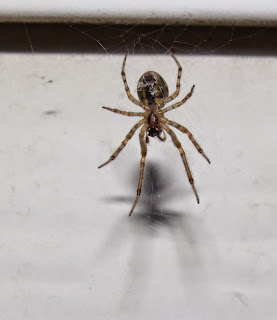