Perhaps no spiders are more often misidentified than the “crevice weavers” in the genus Kukulcania, family Filistatidae. They are quite common throughout the southern United States, where they are frequently confused with everything from brown recluse spiders to tarantulas. 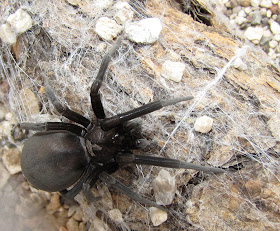 There are currently five species and one subspecies of Kukulcania recognized in the U.S. Here in Arizona we have both K. arizonica and K. hibernalis (the “Southern House Spider”). Indeed, houses are often where you find them. Look for their sprawling, lacy webs issuing from the exterior of window frames, under the eaves, and similar situations.

Filistatids in general belong to a larger group of arachnids called “cribellate” spiders. These spiders possess an extra silk-spinning organ called a cribellum, and a comb on the outside of the metatarsal segment of each fourth leg. This row of short, stout, curved hairs is called a calamistrum and is used to “fluff” the silk that issues from the plate-like cribellum. This “carding” of silk is accomplished by very rapid vibration of the fourth leg as it rests on the third leg. This is in contrast to most other cribellate spiders that employ a slow rocking motion. The web that results is therefore not sticky, but the threads so random that they easily entangle potential prey. 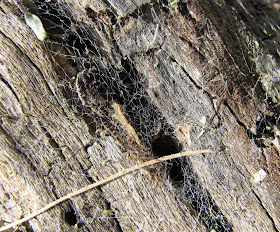 The odd web is just the beginning of weird for Kukulcania crevice weavers. The genders differ so dramatically in appearance that one can be forgiven for assuming they are different species. Mature females are a lovely, velvety black or dark gray in color, with a body shape and lumpy eye arrangement reminiscent of a tarantula. Mature males are beige or pale brown in color, with small bodies and extremely long legs. They are mistaken for brown recluse spiders much of the time, but note the differences. Male Kukulcania have eight eyes, grouped atop the crown of the head as they are in the female. Recluse spiders have only six eyes, grouped in three pairs across the front edge of the carapace. Also notice the extremely long, elbowed pedipalps of the male crevice weaver. No recluse spider is that….well,…well-endowed. 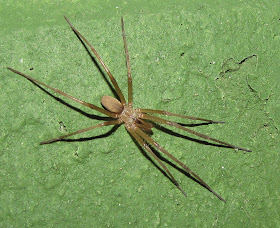 We’re not finished, it gets stranger. All filistatids known thusfar have their jaws (chelicerae) fused. That means that each one of the pair is incapable of moving independently, like in most other spiders. They are also built to lose their legs if necessary to escape a predator. Actually, many kinds of spiders possess the ability to break off parts of their legs without losing much blood in the process. This phenomenon is known as “autospasy,” and in the case of crevice weavers the weak joint is at the juncture of the tibia and patella segments.

Interestingly, female Kukulcania continue to molt after they become adults. Mygalomorph spiders (tarantulas) are the only other spiders known to do this. It seems to be related to longevity: both spiders take a long time to reach sexual maturity, and are capable of living several years. Like the cellar spiders I addressed in an earlier blog entry, filistatids are “haplogynes,” meaning that the females have largely unmodified, if not non-existent external genitalia. The paired openings to her reproductive tract are under what is more-or-less a slot-like orifice. 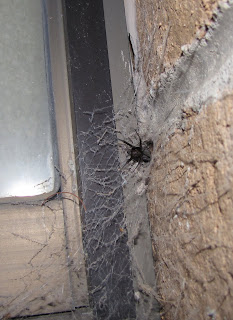 The best time to observe Kukulcania species is after dark. Females will venture to the lip of their retreat in anticipation of prey. Males will be wandering in search of love and romance. See if you can’t find one or both of the sexes on the exterior of your own home, garage, shed, or barn.