Rough stink bugs in the genus Brochymena, native to North America, have suffered ever since the arrival of the invasive Brown Marmorated Stink Bug from Eurasia. The two are easily confused at first glance, but if you find large numbers of stink bugs in or around your residence, chances are it is the invader, not our natives. Brochymena also overwinters in the adult stage, but usually stays outdoors, tucking itself under loose bark with other members of its kind, or finding some other snug place where conflict with people is minimal. 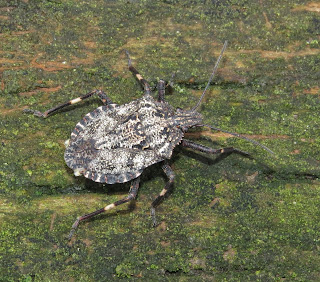 Last month I had occasion to go to Portland, Oregon, where I encountered the specimen shown above. It is likely Brochymena affinis, but identifying rough stink bugs to species is difficult if not impossible without scrutinizing the (dead) creature under a microscope.

Many times you will find Brochymena out and about on warm, sunny winter days. That does not mean they are easy to spot, however. They resemble both in appearance and texture the lichen-mottled bark on trees. Indeed, their other common name is "tree stink bugs." Adults fly well, and may alight on fences, the sidewalk, or some other similar, contrasting backdrop, and it is then that one usually recognizes them as animate objects. 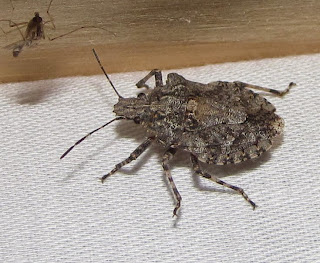 Depending on which authority you consult, there are somewhere between 21 and 23 species of Brochymena found in North America north of Mexico. Adults of our species collectively range from 10-19 millimeters in body length, and are an overall gray color with black and white or ivory speckling. Eggs are laid in small clusters on twigs of trees, and the nymphs that hatch progress through four instars (an instar is the interval between molts) before reaching adulthood. Their development from egg to adult is surprisingly long, so there is but one generation produced annually, at least in temperate climates. 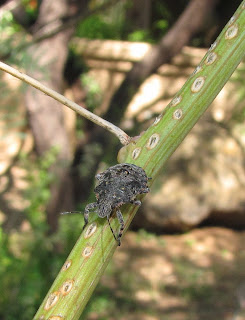 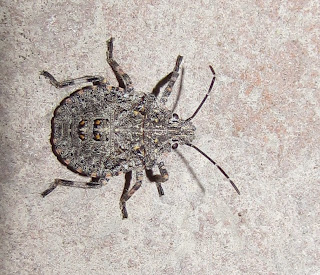 Their ability to withstand cold became abundantly clear to me when I was still collecting and preserving specimens. When I was in Cincinnati I discovered an aggregation of rough stink bugs beneath a shard of bark on a tree. I attempted to kill some of them by placing them in a container inside my freezer. I think I left them there about a week or so, took them out, and found them coming back to life in short order.

Rough stink bugs are not pests in any way, shape, or form, so consequently rather little is known about these insects of non-economic importance. They are suspected of feeding on the sap of host trees and shrubs, though there are persistent rumors that they are occasionally predatory. Since many true bugs (Hemiptera: Heteroptera) are opportunistic predators or scavengers on other insects, this may not be a stretch. 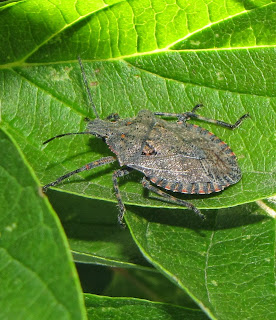 So, how does one tell a harmless Brochymena from a pestiferous Brown Marmorated Stink Bug (BMSB)? First, look at the antennae. The BMSB has white bands on the last two antennal segments. Rough stink bugs have no such contrasting markings on the antennae. Second, look at the leading edge of the pronotum (top surface of thorax), right behind the head. There are fine teeth along that edge in Brochymena, not so in the BMSB. 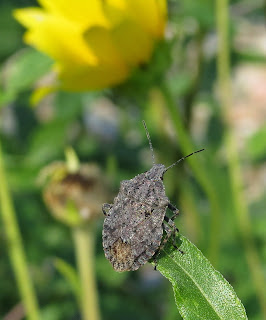 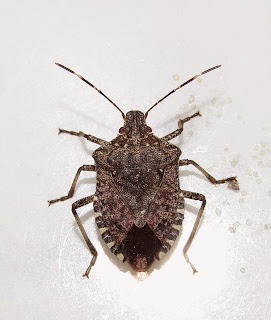 Given their cryptic nature, it amazes me that any other creature could find them and make a meal out of them, but enemies they do have. Rough stink bugs are known to be the prey of the sand wasp Bicyrtes quadrifasciata, for example. The female wasp finds a stink bug, stings it into paralysis, and then flies it back to her nest burrow where she deposits it as food for her larval offspring. Birds, and fence lizards are also recorded as predators of the adult bugs. Feather-legged tachinid flies in the genus Trichopoda glue their eggs to the top of a stink bug's body where the insect cannot reach to groom them off. The fly larva that hatches bores through the exoskeleton of the host and feeds as an internal parasite, usually killing the bug eventually. 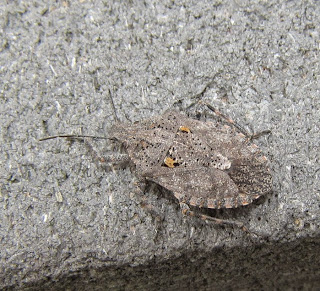 Look for rough stink bugs in spring and fall when they are emerging from, and entering, hibernation. You'll have to look closely, though, given their camouflage. 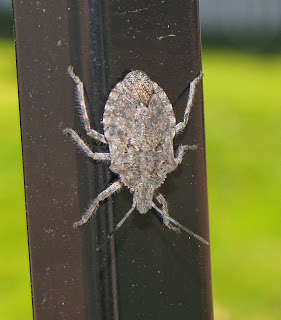