Perhaps no insects embody “beauty and the beast” better than the green lacewings of the family Chrysopidae. The average person would be hard-pressed to make the connection between the hideous larva and the delicate adult it is destined to become. Who could blame them? Gardeners might easily mistake the sickle-jawed immature stage as a villain rather than a hero. 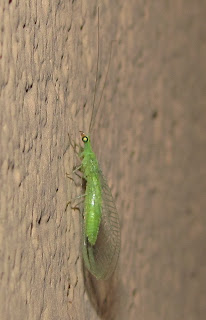 The family name Chrysopidae translates to “gold eye,” and indeed the adults of some species of green lacewings have eyes that seem to have fallen out of a kaleidoscope. The family belongs to the insect order Neuroptera or “nerve-winged insects.” This name comes from the dendritic pattern of wing venation and is not to imply that the wings of these insects feel any kind of sensation, at least any more so than in any other insect.

There are fourteen genera and at least 85 species of green lacewings occurring in North America. No doubt more species await description by scientists. These are very abundant animals, and just about everyone, from city center to rural countryside, has had an adult green lacewing or two (or several) visit their porch light at night. What can easily escape attention, however, are the other stages in the life cycle of chrysopids. 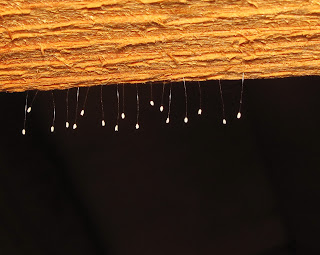 Let’s start with the egg stage. Believe it or not, the little white balls on the ends of these hairlike stalks are lacewing eggs. One could mistake the egg clusters for the fruiting bodies of some kind of fungus, and when they appear on a leaf or stem, cause a gardener some degree of concern. The female lays her eggs on these stalks for good reason: to keep them out of reach of predators like….well, her offspring’s siblings for example. So voracious are larval lacewings that they will not hesitate to cannibalize a brother or sister right off the bat. 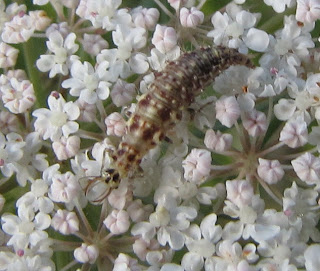 Larval lacewings are undeniably ugly: worm-like bodies studded in clusters of spines, with a head dominated by jaws that look like ice block tongs. As if they are aware of their own ugliness, the larvae of some species conceal themselves under a layer of debris that they stick on those clusters of spines along their backs. What goes into this “garbage pile” might include bits of lichen, dust, or even the bodies of their victims. The real reason the larvae disguise themselves is not to redeem their ugly appearance, of course, but to make them appear innocuous to their prey and hide them from their own predators. 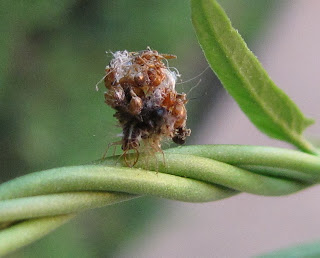 Lacewing larvae prey mostly on aphids, which has earned them the nickname “aphidlions.” They won’t pass up the opportunity to kill a caterpillar or other insect, either. They simply approach a prey insect and grab it with their jaws. Puncturing the body of their prey, they inject fast-acting paralytic compounds and digestive enzymes that go to work immediately on the victim, essentially liquefying its internal organs and tissues. The aphidlion then draws out a fluid meal, also through its hollow jaws. 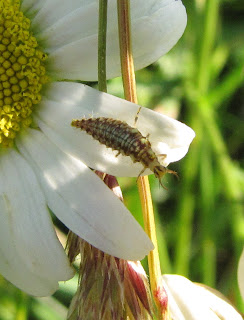 Aphidlions are themselves vulnerable to various predators, namely the ants that guard colonies of aphids. Aphids secrete a sweet, liquid waste product called honeydew, and this is highly coveted by ants. The ants therefore vigorously defend the aphids from their predators and parasites. So, those lacewing larvae hidden under a blanket of debris might more easily escape detection by ants than a naked aphidlion would.

Once it emerges from the egg, an aphidlion proceeds through only three instars (intervals between molts). A mature larva will then spin an opaque, silken cocoon before transforming into the pupal stage. The mature adult will chew its way out of the cocoon, leaving the empty vessel looking like a tin can with the lid hanging by a hinge of remaining metal. 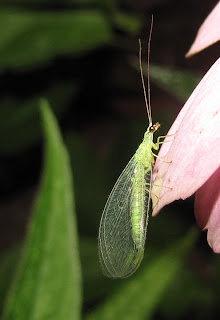 The adult insect is delicate-looking but durable, and highly colorful. They find mates by a kind of Morse Code, drumming their abdomens in a species-specific rhythmic pattern that the opposite gender recognizes. So precise is this courtship “song” that some species can be separated only by differences in their tune. The species themselves are physically identical. The adults do feed. Some continue their predaceous lifestyle, but others feed on aphid honeydew, or nectar or pollen. 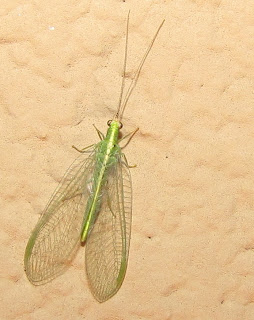 Green lacewings are best appreciated as living creatures. The color of their bodies and eyes quickly fades after death. Be on the lookout for the larvae, but be careful. There have been reports of bites from larvae that fall out of trees and onto people, with reactions to bites varying from a nuisance to extremely painful with relatively persistent effects. Mostly, lacewing larvae should be considered among your best friends when it comes to waging war on garden and crop pests.