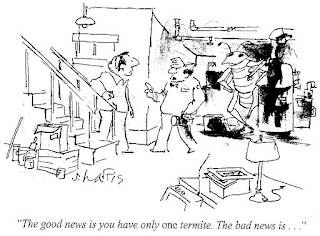 The news is replete with stories of people who have accidentally destroyed their homes, workplaces, and other structures in an attempt to kill a spider or insect. These are the sensational and drastic results of misguided intent, but there are many other negative consequences possible from do-it-yourself pest control. Do not be a sucker, a law-breaker, or the next headline.

At this time of year, spiders venturing indoors is a top complaint of many homeowners. Please understand that if you notice a spider in your home or office it is an indication of....absolutely nothing. It is not out to get you. It is not a sign of an "infestation." It is not a sign that there are more to come. Male spiders of all kinds are on the prowl for females, and even those species that normally spin webs abandon them to look for mates, mostly in autumn. There are also plenty of spiders that never spin webs, like wolf spiders, jumping spiders, and longlegged sac spiders. Both males and females traverse large areas in search of prey. Occasionally, they will find their way indoors. Simply coax one of these spiders into a container and escort it outside to a log, stone wall, brush pile, or other place it can easily find cover. Thank you. 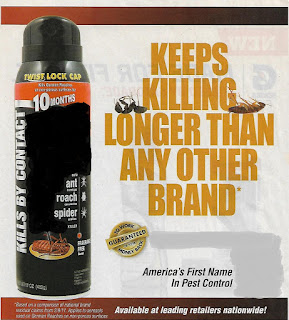 Foggers are also known as "bug bombs," and can live up to that name if you fail to follow the deployment instructions to the letter. Forgetting to extinguish a pilot light on the water heater or furnace before detonating a fogger can result in burning your home to the ground, or blowing it to bricks and splinters. Moreover, as with any general insecticide, you are killing beneficial insects, and spiders and other arachnids, along with whatever pest you were targeting. Yes, those cobweb weavers in the corner are already controlling pests like carpet beetles and fungus gnats, and other household nuisances. 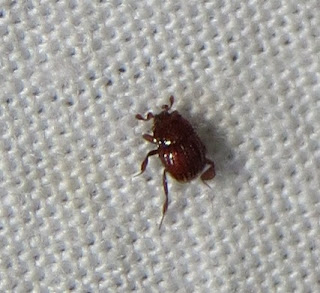 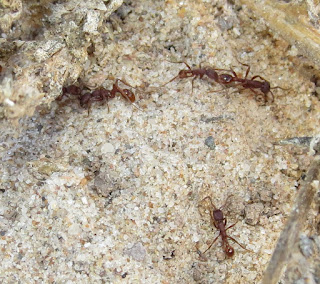 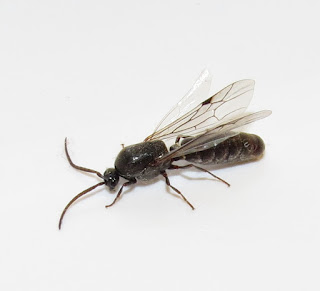 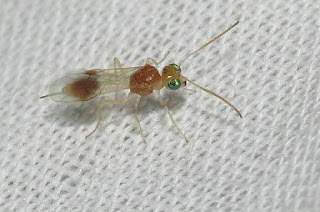 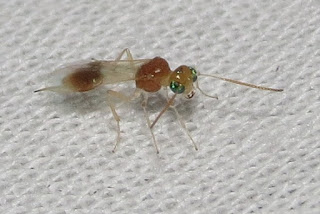 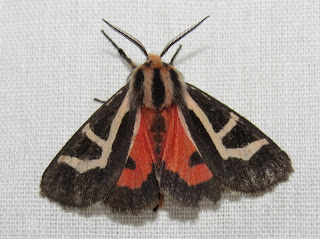 Today it is cold, foggy, and there is still some snow leftover from yesterday here in Colorado Springs. What better time to look back on warmer times and the insects that could be found back then? National Moth Week this year was July 21-29. Despite the fact there was a full moon during that period (the worst possible conditions for putting out a blacklight because the lunar light is literally superior competition that nocturnal insects navigate by), we had very interesting results along the Front Range. 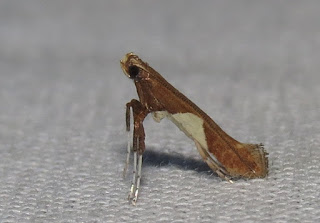 As has been the case for at least three years now, the Mile High Bug Club sponsored and executed local events during National Moth Week. Weather conditions varied considerably, as that time of year represents our season of almost daily storms, but we persevered and accumulated good data sets from casual observations and imaging. We posted most of our images to iNaturalist, and anyone can search by location and date for the results. 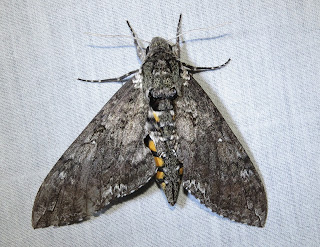 For the second year in a row we kicked off the week on Saturday, July 21, at Chico Basin Ranch, a sprawling 80,000+ acre parcel that straddles the El Paso and Pueblo County line. This year we were again on the El Paso County side, setting up our lights at the bird banding station composed of a building and a nearby barn. 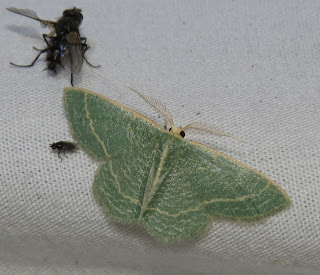 Almost immediately we attracted moths, beetles, true bugs, flies, and other insects to our blacklights and mercury vapor light. Thanks to being located well away from water, we were not inundated with caddisflies, variegated mud-loving beetles, and other aquatic insects like we were last year; so, the night was much more comfortable and we did not inhale any insects accidentally, nor take that many home in our vehicles. 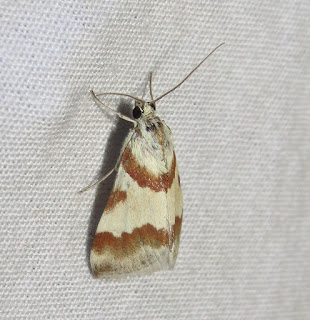 Insect diversity in general was very good, in a year in which overall insect abundance has been exceptionally low. The diversity of habitats at the ranch, most natural and some man-made, has much to do with the biodiversity of insects, birds, and other wildlife found there. 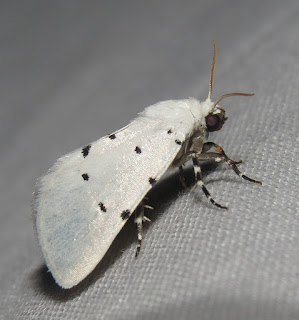 Our second of four events was on Tuesday, July 24, at Cheyenne Mountain State Park, just south of Colorado Springs off of Highway 115. The park always welcomes us and adds our events to their schedule for the campers in the park to enjoy. Indeed, we had a respectable, if brief, turnout from visitors. Many families had children that were either up past their bedtimes already (especially those from different time zones), or were easily bored, or both. 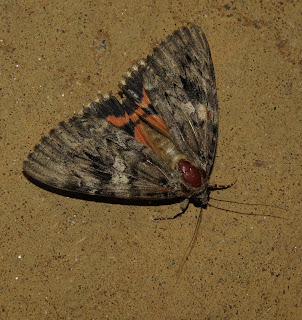 Our third event was Friday, July 27, at Bear Creek Nature Center in Bear Creek Regional Park, and it included a presentation on moths by yours truly. We had a very good public turnout, but the weather was absolutely miserable. At least the rain stopped by the end of the talk so that we could deploy our lights on the deck out back. Thankfully, a large underwing moth made an appearance, and even stayed long enough for everyone to get a look. Most of the other moths were small and difficult to see on the stucco-textured exterior of the building. 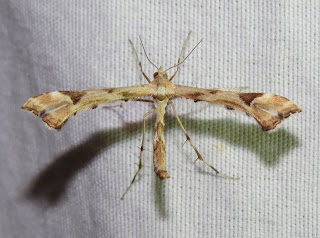 We were back at Cheyenne Mountain State Park for our concluding event on July 28. Once again we had questionable weather, and zero attendance from the public. Still, if you light it up, they (moths) will come, and that night was no exception. 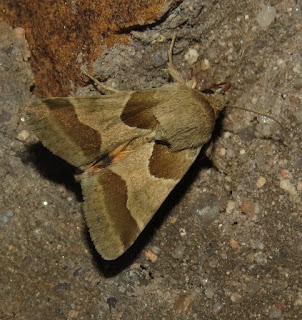 My wife and I also took a weekend trip to Lyons, Colorado, north of Boulder (northwest of Longmont), July 22-24. We stayed at Stone Mountain Lodge and Cabins, and did our blacklighting there. The wooded area, with cliffs rising above the lodge, along with landscape trees, shrubs, and plants, supported quite a diversity of moths and other insects, even given the unseasonably cool, damp weather. 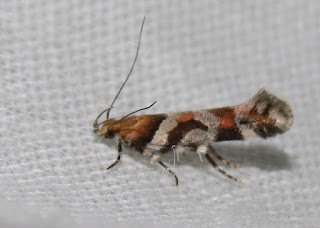 A twirler moth, Aristotelia sp., from Lyons, Colorado on July 22.

Next year, Mile High Bug Club may opt to do fewer events during the designated National Moth Week to avoid stormy weather. Here along the Front Range we seem to have two peaks in moth diversity and abundance: One in mid- to late June, the other in about mid-September. Obviously, one goal of the national event is to remain consistent in the timing and location of observations to note trends in abundance and diversity over time. That may not always be a true reflection everywhere, though. The chief goal of our bug club events is to simply recruit new members of the public to an appreciation of the butterflies of the night. 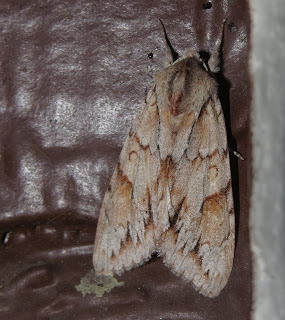