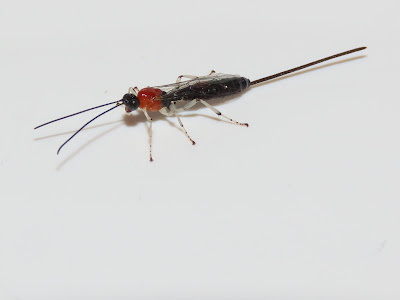 It started out innocently enough. Back in 2021, a Facebook post by Sloan Tomlinson (@thatwaspguy on Twitter) caught my attention. He had reared small parasitoid wasps, Elasmus polistis, from an abandoned paper wasp nest that he had contained. I messaged him to learn more, and then followed his suggestion to try this myself. 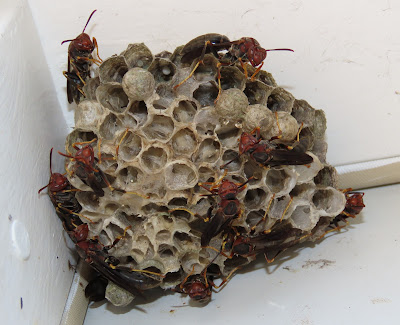 Nest of Polistes metricus from 2022

We had a nest of the Metric Paper Wasp, Polistes metricus, in a corner of the recessed frame of our back porch doors (French doors) at our home in Leavenworth, Kansas, USA. After the wasps left, I cut down the nest and placed it into a plastic container. Shortly thereafter, in about mid-November, a large number of small parasitoid wasps emerged that were not the same as those that Sloan Tomlinson had reared out. That is a separate mystery from the one I am documenting today.

This year, 2022, we had two Polistes metricus nests, one in each corner of the door frame. One succeeded better than the other by a substantial margin, and I repeated the exercise of cutting down the larger nest and containing it in late autumn. Besides the large number of tiny, metallic parasitoid wasps, I got a shocking surprise. 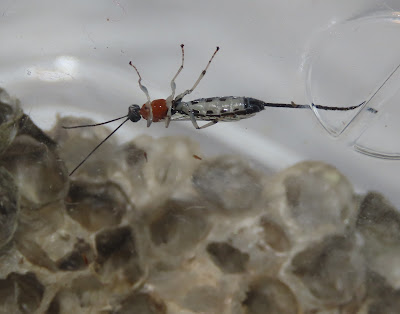 My partner, Heidi, and I went on a vacation in late October. When we returned, I was amazed to find a live female ichneumon wasp, one nearly deceased male, and one deceased male, inside the container with the Polistes nest. The insect was not one of the species that is a known parasitoid of paper wasps. I was able to identify it as Calliephialtes grapholithae, but that made no contextual sense. All of the known hosts for that species are caterpillars of moths. 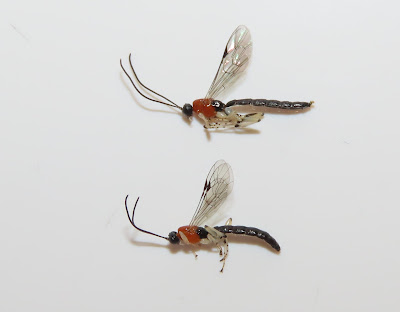 The only way the association of C. grapholithae with paper wasps can be made is if there is a moth larva involved in some fashion. It so happens that there is. The Sooty-winged Chalcoela, Chalcoela iphitalis, is such a moth (Crambidae: Glaphyriinae). The caterpillar stage is predatory on the larvae of Polistes wasps, inside their nests. Webbing spun by the caterpillars is a clue to their presence. Apparently, the adult female moth approaches the nest at night, when the adult wasps are less alert. Still, she may lay her eggs on the back of the nest, and let her tiny larval offspring find their way into a cell. 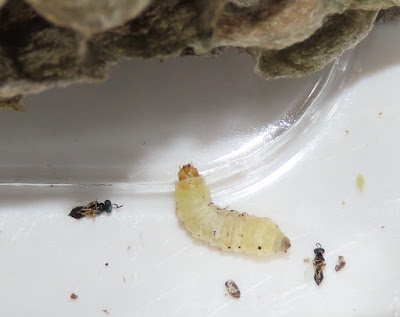 Sure enough, I happened to notice one of these moth caterpillars, strikingly similar to a paper wasp larva, in the bottom of the container with the nest and its other associates. There is little doubt in my mind that C. iphitalis is a host for the ichneumon wasp Calliephialtes grapholithae. The pattern of this wasp seeking concealed hosts fits, though how the wasp navigates a well-defended nest of paper wasps is beyond my imagination. I am hoping that such an infiltration can be documented, or that someone else will independently rear the ichneumon from a paper wasp nest. Until that time, I cannot assert, unequivocally, the host relationship. 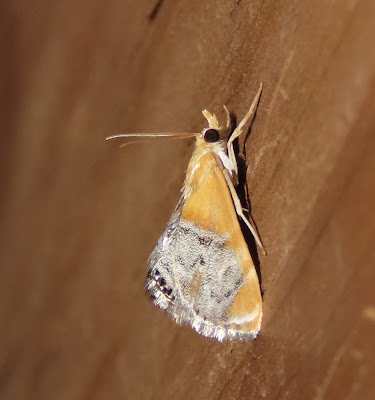 I also wonder if the sever drought experienced by eastern Kansas this past summer had anything to do with the proliferation of the moths that plague the paper wasps. I noticed more than usual. One of the two nests almost failed completely, though one of the foundress wasps may have died prematurely, slowing the nest’s rate of growth, eventually halting it. 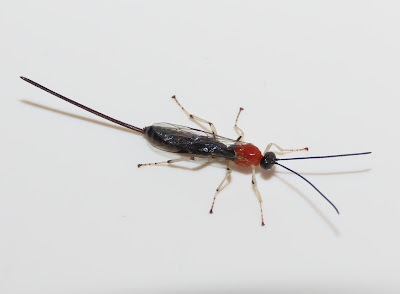 Much remains to be discovered about even the most common of insects, especially when it comes to ecological relationships to other species. I urge my readers to undertake what observations and experiments they can to further enlighten our understanding of the natural world.