Welcome to another edition of “OrThoptera Thursday,” a randomly-appearing regular feature of this blog. Today’s spotlight shines on the Coral-winged Grasshopper, Pardalophora apiculata, one of the largest spring grasshoppers found across southern Canada and the Great Plains of the U.S. Just yesterday I saw scores of individuals at Wilson Lake north of Russell, Kansas (Interstate 70). Startled off the gravel road and into flight by our car, the insects pummeled our vehicle with alarming frequency. 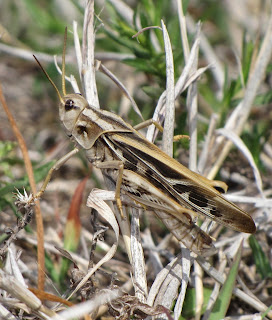 Female Coral-winged Grasshoppers can reach six centimeters (60 millimeters) in body length, and are true heavyweights. Handle one and you feel her bulk. Males are smaller, but at a minimum are about 30 millimeters in length. Both genders fly strongly despite their mass.

In spite of their stunning size, these are among the most cryptic of the band-winged grasshoppers (subfamily Oedipodinae). The body, legs, and front pair of wings (tegmena) vary in color from light gray to gray-brown, beige, or even olive, the better to blend in with the earth tones of the prairie. A criss-cross of pale lines and dark blotches and spots renders them nearly invisible among short, tangled grasses. 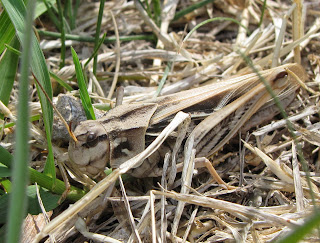 The bland insects turn into another creature entirely when in flight. The hind wings are a lovely pinkish-orange, orange, or pale red, with a dark submarginal band. The edge of the wing is clear. These flight wings are folded accordion-like and concealed by the tegmena when the insect is at rest. 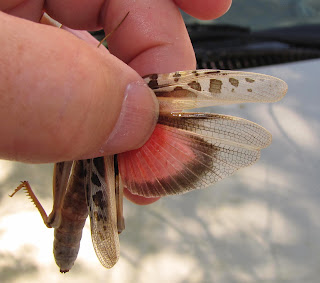 The geographic distribution of P. apiculata is more or less an inverted bell curve extending from southern Canada south through Wyoming, eastern Colorado, New England, western Virginia, and Tennessee to Arkansas and Oklahoma. It reaches well north into the Yukon Territory, Northwest Territories, and central Quebec, too.

Look for the Coral-winged Grasshopper on sandy soil in prairie habitats, as well as forest openings. The adults are usually present in April, May, and June, but can sometimes be seen as early as mid-March. They disappear by July if not a little earlier. Nymphs hatch from eggs laid in “pods” in the soil, emerging in July and August on average. They overwinter and become adults the following spring. The life cycle may take two years in the most northerly latitudes, the insects overwintering as eggs the first year. 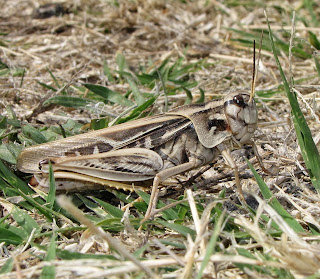 This is not a pest species because it is rarely present in large enough numbers to have an economic impact. It is capable of flying long distances as an adult, but is considered non-migratory, existing in relatively compact populations. Nymphs and adults feed mostly, if not exclusively, on grasses.

The Coral-winged Grasshopper can be confused with other species of Pardalophora, but note that the inner face of the hind femur (“thigh”) is uniformly yellow or orange, the hind tibia (“shin”) is yellow, and the tegmena have far fewer spots and blotches than similar Pardalophora, or species like Xanthippus corallipes, which is also a spring and early summer grasshopper that usually has yellow hind wings. 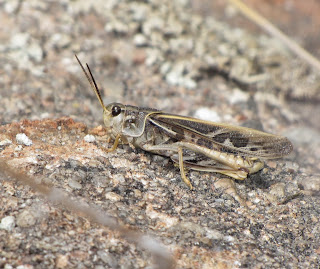