At least once each year I am asked about spider-like creatures that jump, living in someone's basement, cellar, shed, garage, or home. People don't like to get too close to spidery-looking things, so sometimes the inquiring individual includes a picture, but often not. No matter, it is almost always "camel crickets" they are describing, from the family Rhaphidophoridae in the order Orthoptera. 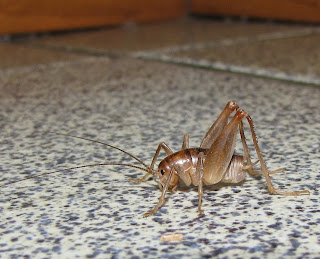 The common name of "camel cricket" may describe their hump-backed appearance, but these are not true crickets. Adults are wingless, for one thing, and thus unable to "sing." The exceptionally long antennae give these insects a sensory advantage in the perpetually cool, damp, dark habitats they mostly prefer: old wells, cellars, mine shafts, rodent burrows, basements, and caves (to which they owe their other common name, "cave crickets").

Adult camel crickets can be fairly large, with a body length varying from 9-35 millimeters depending on the species. The average legspan is even greater, which makes the whole insect appear larger. This can be intimidating to the average homeowner, no question. 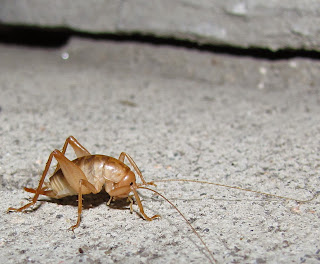 Fortunately, camel crickets are not dangerous in the least, and rarely even do damage to property. Female camel crickets do bear a blade-like organ called an ovipositor that protrudes from the rear of the abdomen. This sword-like "tail" is often mistaken for some kind of stinger, but in reality it functions to insert eggs in the soil. Larger camel crickets can probably give you a good nip with their jaws, but good luck catching one. Many camel crickets can jump several feet when disturbed. 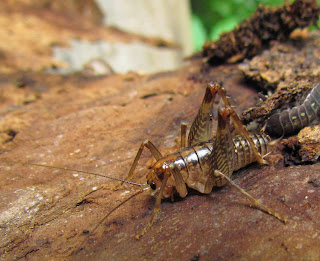 Like most members of the order Orthoptera, camel crickets are ominvorous. They feed on virtually anything organic, but have been known to damage paper products and occasionally fabrics. Some species are pests in mushroom-growing operations. Camel crickets will also capture and eat other insects and invertebrates, especially those that are injured or otherwise weakened.

Since camel crickets are highly moisture-dependent, keeping the below-ground areas of your home dry will discourage them from colonizing. They are not social in the sense of ants or bees, but seem to enjoy each other's company. Large numbers of them are often found hiding together under boards, stones, bricks, logs, leaf litter, and other debris. 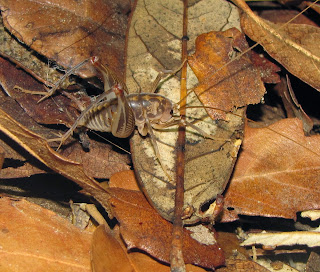 There are roughly 150 species, in 21 genera (plural of genus), found in North America north of Mexico. Many of these are specialist species found only in cave systems, sand dunes, and similar geographically-isolated habitats. The "sand-treader" camel crickets, for example, are restricted to dunes, and equipped with long spines or "sand baskets" on their legs that help them dig in the soft, shifting sands. These and other arid-land inhabiting species are more robust and compact than their leggy forest- and cave-dwelling relatives. They are important scavengers of animal droppings and dried vegetable matter. 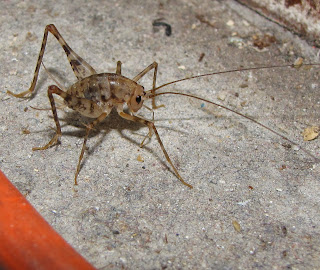 The Greenhouse Stone Cricket, Diestrammena asynamora, is native to China and other parts of Asia, but was established here in North America before 1900. This is fast becoming the most frequently-encountered camel cricket in urban areas east of the Rocky Mountains. As the name implies, it can do occasional damage to vulnerable young plants inside greenhouses. 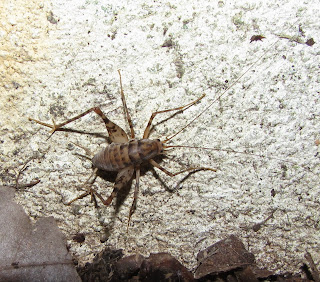 Our most common native camel crickets belong to the genus Ceuthophilus, which includes about 90 species. I often find them at night, clinging to the exterior of buildings, or clambering over rock walls, in rural areas. Nighttime is definitely the right time to find camel crickets in general, when the venture from their daytime shelters. 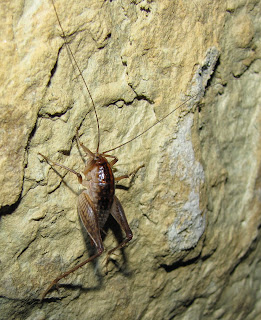 Entomologists attract camel crickets by laying a trail of dry oatmeal and returning at night to look for the insects. Molasses is also used as an attractant, smeared on tree trunks and logs.

Indoors, camel crickets may be grazing on mold, mildew, and fungi, so it might be wise to inspect for potential problems with those agents of decay should camel crickets appear in abundance.