Few insects habitually appear in adult form during the winter months, but members of the family Trichoceridae, better known as "winter crane flies," are among them. I found a few attracted to the porch light at my late mother's apartment in Portland, Oregon the evening of December 10, 2014. 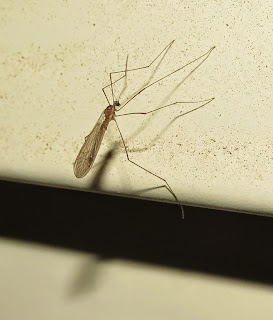 Distinguishing winter crane flies from other crane flies is not easy, because the characters needed to tell them apart are not readily visible in the field, or even in images. They are relatively small, averaging 6 millimeters in body length. Winter crane flies have three "simple eyes," called ocelli, which other crane flies lack. The ocelli are on the crown of the head between the compound eyes. The wing venation helps to separate trichocerids from other families of crane flies, too; and even helps identify the three North American genera. 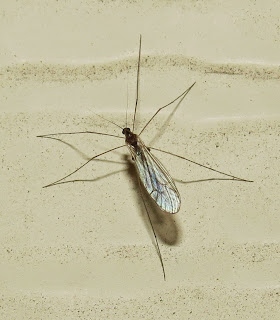 Males can be seen flying in swarms on sunny days, but these flies seem to be associated mostly with dark, sheltered situations like the mouths of caves and mine shafts, hollow trees, and cellars. This might reflect the larval affinity for decaying organic matter.

Winter crane fly maggots have been found in decomposing leaves and vegetables, as well as in fungi, manure, decaying tubers in root cellars, and in rodent burrows where they probably scavenge on feces.

Most North American trichocerids are in the genus Trichocera, which accounts for 27 species. There is one species each in the genera Paracladura (western North America) and Diazosma (transcontinental).

Since these flies are of no economic importance, we don't know as much about them as we do other insects. Still, I find it delightful that I can find a flying insect in the dead of winter. It is a testament to the durability and diversity of insect life no matter the weather or the environment. 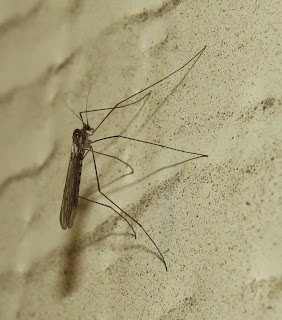