There has been a great increase in concern, and spread of misinformation recently in response to a press release and policy paper earlier this month. The publication advocates for more research into Chagas disease, caused by a parasitic organism, Trypanosoma cruzi, carried by assassin bugs in the subfamily Triatominae. The result in social media especially has been the misidentification of nearly every indoor "bug" or assassin bug as a "kissing bug" carrying Chagas. 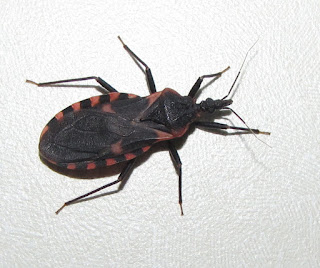 I wrote about our U.S. species of Triatoma in an earlier blog post, and that information remains largely correct. The post also includes information about species regularly confused with Triatoma species.

There is no question that it is in the best interest of governments and scientific institutions to devote more resources to treating and preventing tropical parasitic diseases as the climate continues to warm and new disease vectors spread northward; and as parasitic organisms develop resistance to conventional medicines. The elephant in the room, however, is the increasing population of human immigrants to the northern hemisphere in response to economic suffering and political violence or unrest.

Rural poverty continues to be the reason that many parasitic diseases proliferate, and the driving force behind immigration to nations experiencing relative prosperity and economic opportunities not found in the countries from which immigrants originate.

Victims often carry Chagas disease without showing obvious symptoms, serving as a reservoir for the parasite. Pets, especially dogs, and livestock can also carry the parasites responsible for Chagas. This should not make immigrants, legal or otherwise, enemies of native U.S. citizens, but I fear it is only a matter of time before it becomes a political football, just another excuse to "reform" our immigration policy.

Furthermore, our native species of Triatoma are poor vectors of the disease, which is transmitted when the insect defecates while feeding. The victim of the bite then scratches the parasite-infected feces into the bite wound, or may absent-mindedly rub their eye or other mucous membrane. Our kissing bug species are "potty trained" and nearly always poop after they have left their host.

My friend Richard Fagerlund gave a succinct and accurate assessment of the status of kissing bugs in New Mexico for a television news report, but his advice applies to the rest of the southern U.S. as well: There is simply nothing to be concerned about in urban areas, and simple preventive measures in rural areas, such as keeping your property free of wood rats, almost completely eliminates the prospect of encountering them.

Please help me spread the message that there is no need to panic, especially at this time of year. Kissing bugs are late spring and summer insects, only rarely showing up in autumn. If you are finding an insect in your home right now, it is almost certainly not a Triatoma.