Review: The Sting of the Wild 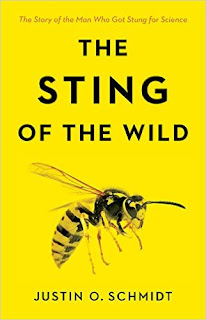 Justin Schmidt is widely acclaimed for creating the Schmidt Pain Index that ranks the potency of the stings of bees, wasps, and ants, based largely on self-inflicted experience. It naturally follows that a book is in order to explain what most would consider a crazy person's pursuit. The Sting of the Wild, from Johns Hopkins University Press, is an odd combination of memoir and study in the scientific method. Does it succeed as either?

Full disclosure is also warranted here. I have known Justin as a friend, mentor, and colleague for decades, and am truly in awe of how his mind works. He asks questions that no other scientist does, then creates ingenious ways to test his hypotheses. No one I know is as innovative, persistent, and hard-working in the name of basic research. I was hoping that his personality and character would be reflected in this book.

The book contains what may be the best explanation of the attraction of certain people to scientific careers:

"Science is an exploratory process more so than a goal to realize. Yes, there are goals, and these must be clearly defined for funding agencies to support the research, but the real excitement and driving force in science is the adventure of seeking the goal, not in attaining the goal."

That is what I was anticipating from this volume: excitement and adventure. I have heard enough stories from Justin to know that he has a nearly limitless source of material, and is able to engage colleagues easily. So, what happened to that? Why did it not translate well to the written page?

If your usual reading in entomology is Howard E. Evans (Life on a Little Known Planet and Wasp Farm), May Berenbaum (Bugs in the System), or Bernd Heinrich (In a Patch of Fireweed), you will likely be disappointed by this book. Those unfamiliar with scientific terms, or chemical molecular structure, will find the book over their head at times, or at least dry and flat. Anecdotes from the field are lively enough, but too few and far between to sustain momentum of the narrative. The reader is forced to weave together the author's timeline from disparate passages and references, so the autobiographical aspect is also broken.

It stings me to say this about the book because its author is someone who should be admired and emulated. Schmidt is profoundly curious, a quality sadly lacking in too many scholars today, if not outright squelched by an academic environment that demands we be more concerned with "managing" nature than understanding it first. He is not some caricature or dare-devil as the media tends to suggest, but this book does little to change that impression, let alone create an understanding of what drives Schmidt's curiosity.

Despite its shortcomings, I learned a good deal from this book, and that alone may be enough to recommend it, at the very least as something worthy from your local library. A general audience is, unfortunately, not going to flock to this book. It reflects the novelty of the author's life, but lacks relevance to the reader unless he or she is also a scientist or aspires to be one. The complete "Schmidt Sting Pain Index," which makes up the appendix, is not enough to push the whole book into the limelight. The best natural history books ignite in the reader the urge to explore and discover. This one might keep them indoors, as a virtual spectator of other adventurers.