The deserts of the American southwest are harsh, demanding environments. Consequently, they host a unique spider fauna. Among the more common of these endemic arachnids are the desertshrub spiders in the family Diguetidae. They might easily be mistaken for funnelweb weavers or labyrinth spiders at first glance, but with a little practice one can recognize both the spider and its web fairly easily. 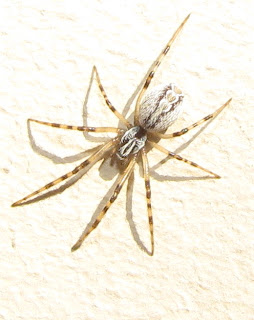 Diguetia is the only genus in North America, with seven species occurring north of Mexico. They have collectively been recorded from Utah and Colorado to California, and Texas. D. canities is the most widely distributed species, and has been separated into three subspecies.

These are mid-size spiders, mature individuals topping out at 5-10 millimeters in body length. Their color and pattern is very reminiscent of spiders in the family Agelenidae, and their webs might reinforce that misconception. The webs are horizontal sheets, slightly dome-shaped, with a central tubular retreat in the vertical plane above the sheet. There is also a tangle of threads on all sides of the sheet, above and below. The spider travels on the underside of the sheet to attack prey caught in the tangled threads. 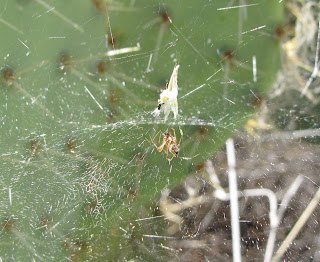 My experience has found that populations of these spiders are rather localized: where you find one web you will find several others nearby. They are mostly located less than two feet off the ground, frequently amid the spiny pads of prickly pear cacti (Optuntia spp.). The retreats are shrouded in plant debris, remains of prey insects, and may include the camouflaged egg sacs of female spiders. These conical “houses” are often the first thing you notice, before the rest of the web comes into focus. 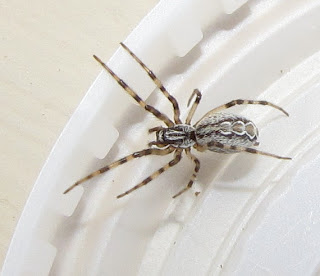 The desertshrub spiders are relatively primitive in the evolutionary sense, and are classified as “haplogynes.” This means the female’s genital opening lacks a hardened plate, and the male’s pedipalps (used in mating) are rather simple. Tarantulas and cellar spiders are more familiar examples of haplogyne spiders.

Next time you are out in the desert, keep an eye out for the webs of desertshrub spiders. The snares are roughly four to six inches in diameter, so are not too easily overlooked. 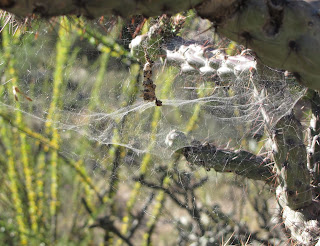