Life Cycle of a Leaf Beetle

Leaf beetles of the family Chrysomelidae seem to be particularly diverse here in southern Arizona. One of the most common species is Leptinotarsa lineolata, a relative of the familiar Colorado Potato Beetle. A visit to one arm of the Sonoita Creek State Natural Area in Rio Rico, Arizona on July 31 found this beetle in profusion, and all life stages but the pupa present. 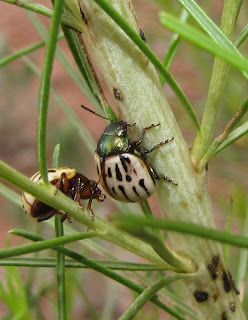 The adult beetles are about 7-8 millimeters long, but colorful. The head and thorax are metallic green, while the elytra (wing covers) are ivory with black streaks. The beetles and their larvae feed exclusively on Burrobrush (Hymenoclea monogyra). The beetles become numerous after the onset of monsoon rains, usually in early or mid-July. They quickly set about reproducing.

Once mated, the female beetles lay eggs in rows along the edge of a leaf near its tip. The large numbers of eggs and their bright yellow color make them very conspicuous. 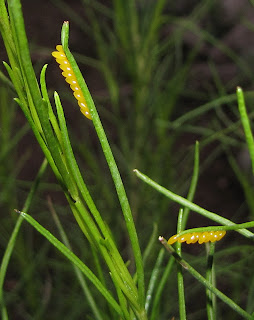 Larvae hatch from the eggs in about seven days and commence feeding on the burrobrush leaves. The grubs go through four instars (intervals between molts) before pupating. I assume the large larvae I imaged are fourth instar. The larvae probably sequester the toxins in the plant to use in their own chemical self-defense. That would explain the bright black, white and yellow markings reminiscent of Monarch butterfly caterpillars. Such toxic insects tend to advertise their unpalatable nature through “warning colors,” a phenomenon known as aposematism. 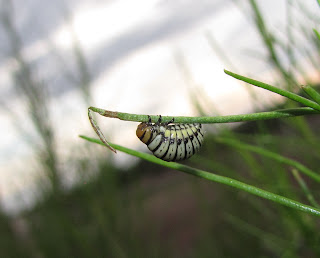 Well, no wonder I couldn’t find the pupal stage. An unpublished study by Ross Arnett and Richard L. Jacques in 1971 followed L. lineolata through its entire life cycle, and they found that pupation occurs in the soil. Adult beetles emerged from the pupae roughly ten days later.

According to Michael Plagens’ account of this species, the beetles are capitalizing on disturbed riparian zone habitats where their host plant thrives in the wake of cattle grazing. Burrobrush is toxic to mammals, so livestock leaves it alone while eating competing vegetation. 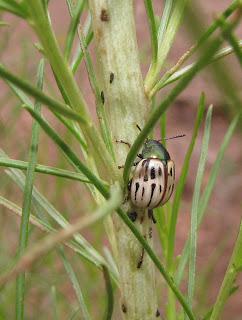 Leptinotarsa lineolata ranges from Texas to California, and south into Mexico. There is no missing this insect if you are at all observant and in the right habitat at the right time. Check them out!