Further proof that you do not have to look far for fascinating arachnids: I happened to notice an unfamiliar jumping spider (family Salticidae) prowling across the outside of the French doors on our townhouse last Tuesday, September 18. I took a few pictures, and some of the images turned out to be legible! Seriously, it turned out the spider was a male of Habronattus cuspidatus, not uncommon here in Colorado. 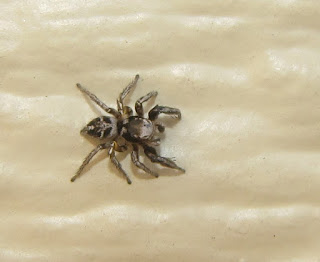 I had to do a bit of searching through Bugguide.net to find images that matched my critter, but as luck would have it, males of this species possess a fairly conspicuous character that surprised me. The “knee” joint on the third leg has a very large spur that can be easily seen with a little magnification. Here is an image from Bugguide that illustrates this structure: 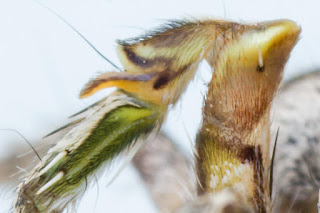 Naturally, I am curious what this spur is used for. Jumping spiders in general are nomadic, hunting “on foot” and using their keen eyesight to spy prey. They also take advantage of their sharp vision when it comes to courtship, males often communicating their identity by signaling with legs and palps. Many male jumpers have the first pair of legs heavily decorated with dense brushes of hairs and/or brightly-colored scales, but those in the genus Habronattus have the third pair of legs modified for visual recognition by females.

Habronattus also uses acoustic signals to complement the visual performance. Males drum or tap, sending vibrations through the substrate (surface on which the animal is standing). Dr. Wayne Maddison rendered this wonderful illustration of a male H. calcaratus, a related species, in its characteristic, crouching courtship posture: 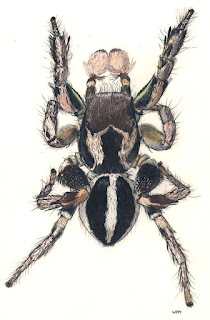 Notice how the third leg is bent to maximize visibility of that knee joint. Meanwhile, the vibratory signals have been likened to an orchestral composition, so complex are they, and synchronized with visual displays. It is possible that this genus of spiders has the most elaborate courthip of any terrestrial invertebrate (Elias, et al., 2012).

Habronattus is a large genus of small spiders. There are approximately 100 species, most of which occur in North America, the rest in the neotropics. The most diversity is in the southwest U.S., but Florida has many species as well. Still others range above the Arctic Circle and east to coastal Canada. Look for them mostly on the ground in areas of scattered vegetation, where they prowl on stones or amid leaf litter. 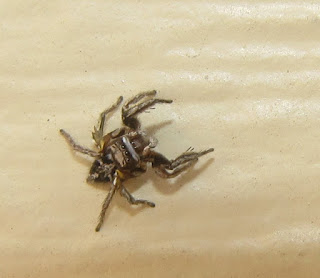