Jumping spiders in the family Salticidae are arguably the most colorful of all spiders, often quite conspicuous despite the fact they are usually rather small in size. Here in North America, the genus Phidippus includes some of our largest jumpers. I have found one bright species to be quite common in recent weeks here in Colorado Springs. Phidippus apacheanus is the Apache Jumping Spider, if I can assume it has that common name. 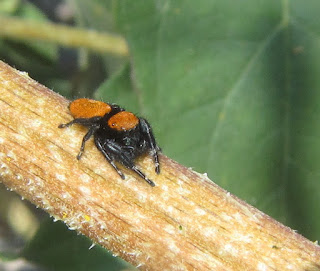 Just yesterday, September 8, I found two specimens on two separate sunflower plants. They appeared to be basking, but more likely they were waiting for potential prey to come within pouncing range. The male, black on the bottom and legs and bright orange on top, may mimic the velvet ants that also frequent sunflowers. Females have a dark dorsal stripe that runs up the middle of the abdomen. 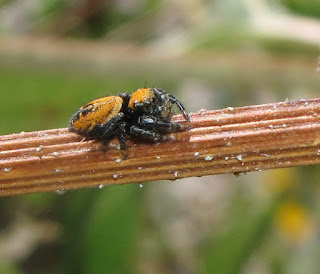 These are not the largest of our jumping spiders, but still bigger than most salticids. Males range from 5.2-10.6 mm, while females measure 7.1-13.3 millimeters. At least one of the specimens shown here may also be immature, one molt or so away from adulthood. Mature individuals can be found at almost any time of year, though males in particular are most common in autumn.

Despite the western-sounding name, this species ranges over most of the United States save New England and the Pacific coast states. Most records do come from the southern half of the U.S. and into Mexico and Cuba.

The habitat preferences for the Apache Jumper may also explain its abundance in certain regions. It is most often found in grasslands, prairies, plains, and dry fields, up to 6,000 feet or so in elevation. Look for it on shrubs, perennials, cacti, and yucca where it prowls for insect prey. Even wasps can fall victim, like the little crabronid captured by this male on August 27. 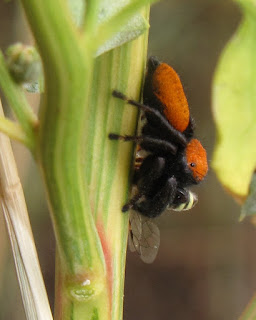 Females of Phidippus apacheanus fashion egg sacs in protected niches, such as beneath the bark on oak logs. There they guard the sac and the spiderlings that emerge from it.

This species occurs in areas where other, similar species of Phidippus can also be found, so you can’t always rely on color pattern alone to identify it. The only way to confirm which species a given specimen belongs to is to put it under a microscope and examine its external genitalia. You still might not be able to reach a conclusion if the specimen is immature. 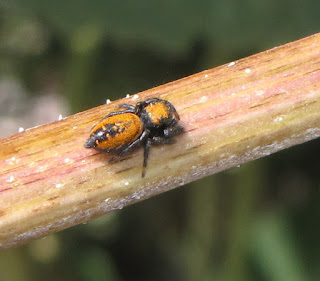 While I am always curious as to exactly what I am taking an image of, I can still delight in the colorful nature and vibrant personalities of jumping spiders. Their alertness is engaging (if not maddening when they dodge to the other side of a stem), and suggests a level of awareness and intelligence that most other arthropods do not possess. Happy spider hunting. 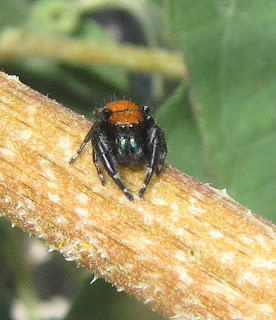