Do you remember that meme that went around on Facebook expressing gratitude that spiders can't fly? Here it is: 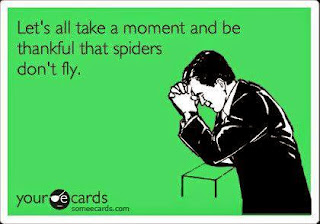 Well, not so fast my friends. Spiders actually can get aloft, thanks to the phenomenon of "ballooning."

Ballooning is the number one way that spiders disperse themselves across the landscape. It is practiced mostly by immature spiders that do not weigh much and are easily blown away; but many spiders are quite small as adults, too, and they can balloon as well. It is a way spiders avoid competition with each other for prey and "web sites."

This technique is brilliantly simple. The spider simply climbs to the top of a vertical object like a plant stalk, fencepost, or mailbox, and issues threads of silk from its spinnerets. When the spider detects a breeze, it stands on "tiptoe," facing the wind, and tilts its abdomen toward the sky. With any luck, the air currents whisk the spider off its perch and up, up, and away it goes. 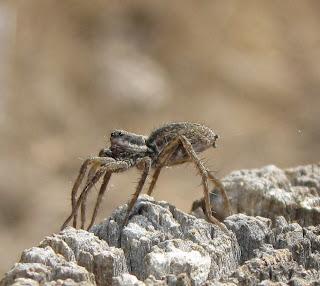 Recent investigations also suggest that spiders can harness electrostatic forces in the atmosphere to balloon on calm days and/or achieve greater success than they might from the wind alone. This is beyond both my grasp of physics and the scope of this post, but you are welcome to read more here.

The spider families that utilize ballooning the most include the crab spiders (Thomisidae), orbweavers (Araneidae), long-jawed orbweavers (Tetragnathidae), and dwarf spiders (subfamily Erigoninae of the Linyphiidae). Personally, I have also seen wolf spiders (Lycosidae) ballooning, like this one at Bluestem Prairie Open Space along the edge of Johnson Reservoir near Colorado Springs, on March 10, 2014. 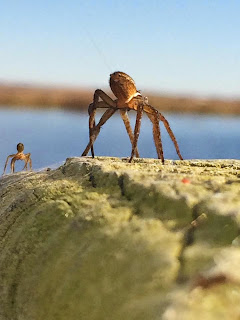 Ballooning is most often performed in spring and late fall by spiderlings, but adult dwarf spiders balloon during the winter, too. The most favorable conditions for a "launch" are when the weather changes to warm days after a prolonged period of cold. This creates updrafts as the ground temperature heats rapidly. Here on the Front Range of Colorado, gusts can be strong and spiders are no doubt carried a long distance.

Darwin, during his voyage on the H.M.S. Beagle, noted large numbers of ballooning spiders coming to rest on the ship's rigging. At the time, the vessel was approximately 100 kilometers off the eastern coast of South America, and Darwin suspected the spiders had drifted at least that distance, if not farther.

Not only are ballooning spiders transported horizontally, they can be blown to high altitudes as well. At least one spider has been collected by airplane at 15,000 feet over Tallulah, Louisiana during a study that lasted from 1926-1931 (Glick, 1939). The greatest number of specimens was still taken at well under 1,000 feet, however. 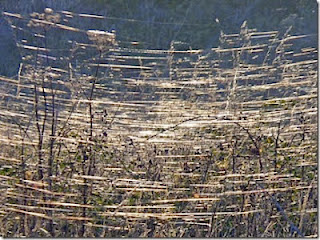 "Gossamer" is the term for the silk lines spiders create when ballooning, and the cumulative effect can literally shroud the landscape in a blanket of gossamer as the spiders come to rest. Considering that there are easily dozens upon dozens of spiderlings per egg sac, multiplied by dozens of egg sacs, multiplied yet again by however many species exist in a given area, it is no wonder that ballooning individuals can create such a spectacle of spent silk.

Not every attempt at aerial navigation is a success, of course. I personally witnessed a small crab spider take off from a utility box in my neighborhood, only to land unceremoniously about three feet away in the street. 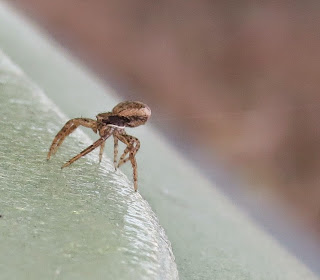 Still, spiders are able to achieve amazing feats this way. They are often among the first animals to colonize islands, and habitats destroyed by storms, volcanoes, and other natural disasters. Re-colonization of the island of Krakatau, and the blast zone around Mount St. Helens, are two of many well-documented instances of ballooning spiders conquering new territories.