I am fortunate to be surrounded by a community of entomologists with a collectively vast knowledge of insects and arachnids, and I meet more of these scholars seemingly every week, at least in the digital world of listservs and social media. I owe it to one such expert, Dr. Charles Bomar, for the identification of the fortieth (40th) species of grasshopper that I have now seen in Colorado Springs alone: the Large-headed Grasshopper, Phoetaliotes nebrascensis. 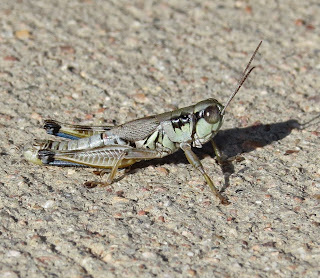 I encountered the critter on the Rock Island Trail, a concrete bike path through residential and commercial areas in eastern Colorado Springs, on October 26 as my wife and I were walking our dog. I snapped only two images, figuring this was something already familiar, in the genus Melanoplus.

Consulting book and online resources at home I was surprised I couldn't find an immediate match. So, I posted the image shown above to the Orthopterist's Society group page on Facebook. Almost immediately I received an answer from Dr. Bomar. He went on to suggest even more important references that I should have, including a link to one of them.

This is the kind of "above and beyond the call of duty" that is typical of most professional entomologists who consider it an obligation to interact with amateurs and the general public. I, for one, am eternally grateful, and could not produce this blog without their help.

Back to the grasshopper. Phoetaliotes nebrascensis is found in places other than Nebraska, ranging widely from southern Alberta, Saskatchewan, and Manitoba to extreme northern Mexico; and from eastern Washington and Oregon, the northeast corner of California, east to the northern half of Texas, Missouri, and Illinois to southwest Michigan, southern Wisconsin and Minnesota.

Adult specimens are most often found from late July through October, at least here in Colorado.

The mature insect measures 21-25 millimeters (males) or 23-33 millimeters (females), and typically has only very short front wings, missing the hind pair of wings entirely. They are therefore frequently confused with subadult specimens of other species. Occasionally there are fully-winged males of the Large-headed Grasshopper, but it is unusual to find them.

The color pattern of this species is so similar to other species that one cannot readily distinguish them based on those variable characters. Once again it is the shape of the male genitalia at the tip of the abdomen that is useful in identification. An overhead or rear view of the entire insect will, however, reveal the swollen head that gives this species its name. The head is noticeably wider than the thorax. 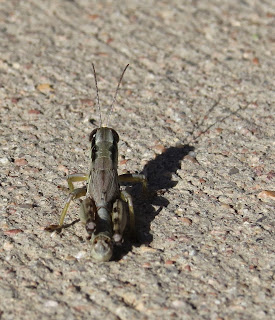 The Large-headed Grasshopper can be common in a variety of habitats, even being a dominant species, especially in tallgrass prairies. Both grasses and broadleaf herbs are on its menu, but it seems to prefer rangeland grasses. It is considered a low-grade pest at worst, but is usually inconsequential. It prospers with spring rains, populations rising dramatically under such conditions.

I can hardly wait to see what "new" grasshoppers turn up next year here in the Springs. There are some that I know occur here that I just haven't seen yet, so my bugwatching list is sure to grow.