Some spiders simply cannot be ignored, and judging by the volume of images and questions we get over at Spiders.us, the most conspicuous spider of late summer and fall is one of the spotted orbweavers: Neoscona crucifera. Indeed, the spiders and their webs are very conspicuous. 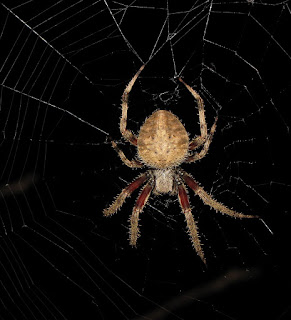 This species was formerly named Neoscona hentzii, hence the common name. It is also known as the “Barn Spider,” but it unfortunately shares that name with another orbweaver, Araneus cavaticus. The two look similar in size, shape, and color. Neither species has a distinct pattern, but the markings on the underside are often more consistent, and a slightly better way to distinguish the two in the field. 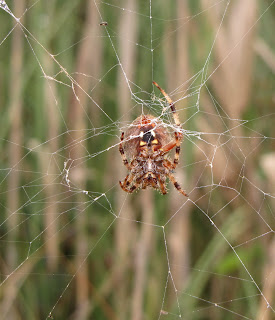 This is a widespread spider, found from Massachusetts to Minnesota, Nebraska, Colorado, and southern California, south to Florida and central Mexico. It favors moist woodland habitats, but can turn up in yards, gardens, parks, and even under the eaves of homes and other buildings. Outdoor lighting attracts insects at night, and many kinds of orb weavers seem to know this. So, they may stretch their webs across your front porch, garage door, or other convenient spot where they can intercept moths, flies, katydids, and other potential prey.

Immature N. crucifera build their webs only at night, taking them down at daybreak. By removing their webs they erase any obvious clue to their presence that birds or other predators may notice. The Black and Yellow Mud Dauber, Sceliphron caementarium, and the Organ-pipe Mud Dauber, Trypoxylon politum, are especially adept at finding orb weavers by following the framework of a web. Remember, the foundation lines of spider webs are not sticky, so can be navigated with impunity by both the spider and its predators alike. The cost of losing potential daytime prey captures pales compared to the benefit of remaining undetected by your own predators.

Adult females leave their webs up during the day, the owner hiding at the periphery of the snare in a curled leaf, or huddled on a twig. 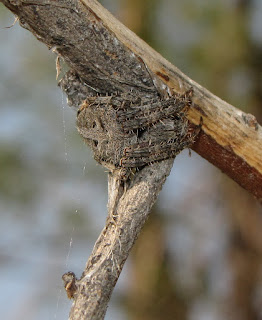 She usually sits head-down in the center, or “hub,” at night. As insects become scarce in autumn, she needs to maximize her prey-catching opportunities, both day and night. The spider consumes a damaged web, recycling the silk.

Mature male orb weavers strike out in search of females and may be found wandering almost anywhere. Not only do adult males not bother spinning webs once they are sexually mature, but they actually lose the physical capacity to do so. They no longer manufacture the types of silk necessary to spin a web. All energy goes into finding a mate. The males mature faster than the females, so some may patiently wait in the vicinity of a female’s web until she becomes an adult. 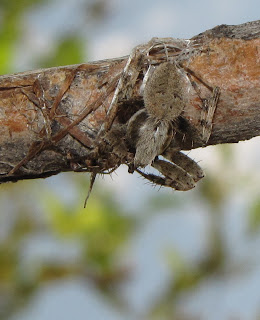 Once mated, females prepare an egg sac, laying up to 1,000 eggs in a spherical or convex mass, covering it with a layer of fluffy, yellow silk, and usually concealing it in a rolled leaf. The sac measures only 5-12 millimeters in diameter.

Orb weavers in general are great to have around your home as they kill many insect pests. Their webs are glorious accomplishments of animal architecture; and the spiders themselves are harmless to people and pets, despite their sometimes intimidating size. Enjoy their beauty and presence before the killing frosts come. 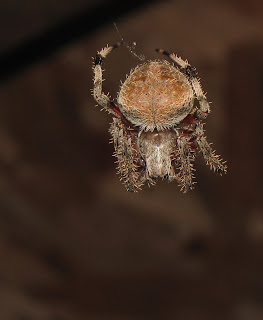