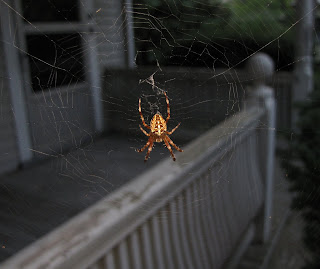 Fall is also spider season, at least in temperate climates. I am asked about spiders much more often in autumn than at any other time of the year. Why is this so? What does it mean?

Orb-weaving spiders in particular are much more conspicuous later in the year than in the spring and summer. This is true for several reasons. The spiders are mature, and therefore larger, for one thing. Females are also competing for the best “web sites” to optimize their prey-catching opportunities. This means that some end up spinning in less-than-ideal spots, like across your door. They could conceivably be there by choice, though. Spiders are quick to learn that outdoor lighting attracts lots of insects, so your front porch might be great real estate for the arachnids. 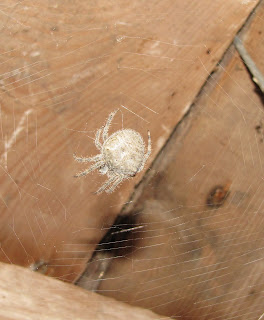 The females are quite large by North American spider standards, and can be rather intimidating when they stretch their snares across the rafters and under the eaves. Ironically, the webs are rather small compared to the spiders themselves.

Females of many orb weavers spin their webs at night, remaining concealed in “retreats” in curled leaves and other shelters by day. They connect a “signal thread” to the hub of their circular snare to literally keep them in touch with the web, alerting them to the impacts of any insect victims that might become entangled during the day.

Other orb weavers sit in the hub (center) of their webs at all times, like the “cross spider,” Araneus diadematus, pictured at the top of this entry. When disturbed, the spider may shake violently in its web, perhaps startling the potential predator into abandoning its intended attack.

While female spiders are stay-at-homes, male spiders wander in search of mates, even those species normally confined to webs. Autumn is the season in which many of these nomadic suitors find there way indoors by mistake, freaking out female humans in the process. The male spouse is then recruited to dispatch the male spider. I encourage folks to consider simply ushering the spider into a container and taking it back outdoors where it can resume its romantic pursuits in a more appropriate habitat.

Some spiders simply hunt on foot and don’t bother with a web. One of the more common examples of this kind of hunting spider are members of the genus Trachelas in the family Corinnidae. They are often encountered indoors at this time of year. 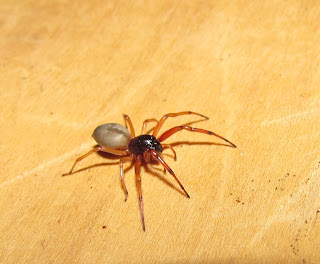 Once considered mildly venomous to humans, they are now classified as harmless.

Wherever you find spiders, enjoy them in their roles as master weavers and pest control patrol. You can safely relocate indoor spiders with the “cup and card” trick. Simply place a cup, glass, or other container over the spider, slip an index card under both the spider and the mouth of the container, turn them over, and take them outside. The spider and your spouse will thank you for it.