Grasshoppers are some of my favorite subjects to photograph. You can creep close to them without spooking them, so confident are they in their camouflage. They are basically two-dimensional, so it is easy to get a lateral view of them with everything in focus. Lastly, they are common insects.

Most diurnal grasshoppers belong to the family Acrididae, known as “short-horned grasshoppers” for their short antennae. Few species in North America are of economic consequence, so it is easy to ignore them, but you would be missing a subtle beauty if you passed them by. 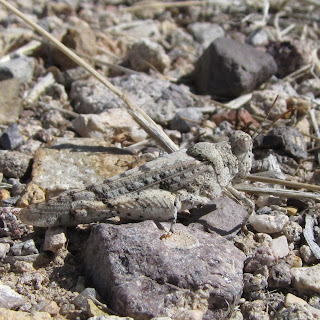 They appear to be little (20-32 mm) flying bits of granite. Ok, when they are young, without fully-developed wings, they resemble hopping bits of stone. This species ranges throughout the southwest, occupying such desolate habitats as dry desert washes (arroyos), overgrazed rangeland, and, in some parts of Tucson anyway, unpaved parking lots. Initially, I thought this insect was one of the colorful band-winged grasshoppers in the subfamily Oedipodinae, but I was mistaken. So, apparently, were early taxonomists who did classify the genus there. Today, most orthopterists (grasshopper experts) put Cibolacris in the subfamily Gomphocerinae, known as “slant-faced grasshoppers.” The rationale for that escapes me. 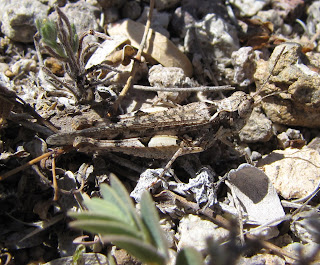 This diminutive (16-22 mm) creature is very cryptic among plant debris, owing to the complex patterns of lines, diamonds, and spots on its body.

The most common of our local grasshoppers by far is the Pallid-winged grasshopper, Trimerotropis pallidipennis. 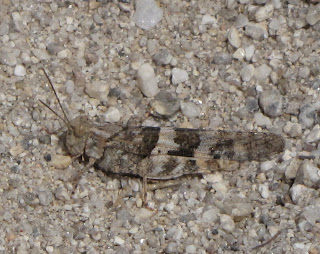 It is abundant in vacant lots, even on city streets where they may bask in the morning. They are true band-winged grasshoppers, the pale hindwing, used in flying, marked with a broad black band. These wings are concealed, folded accordion-like, beneath the narrow, mottled forewings when the insect settles, rendering it nearly invisible. That is quite a vanishing act for a sizable (31-42 mm) insect. This wide-ranging species occurs from western Canada to Chile.

While the pallid-winged grasshopper can fly very far, very well, most winged grasshoppers fly very short distances before settling again. This is true for the Aztec Range Grasshopper, Lactista aztecus, also out and about now in Tucson. 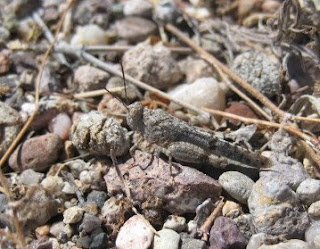 This small (19-25 mm) insect has yellow hindwings interrupted by a black band. The single bar across the forewing (matched by a bar on the femur of the hind leg) makes it easy to identify. It ranges from Arizona to Texas, south into Mexico.

Wherever you live, there should be grasshoppers. Take a closer look at them and see if you, too, aren’t delighted by their earthtone colors and captivating personalities as you play hide-and-seek with each other. Share your stories and discoveries here, and/or post your images over at Bug Guide where others can enjoy them as well.