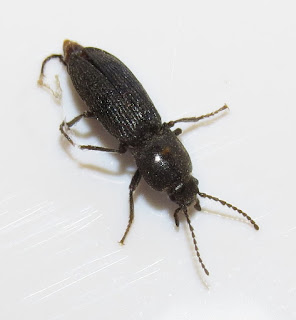 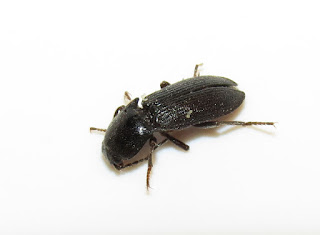 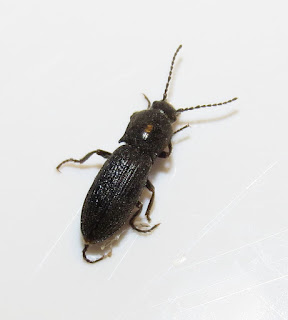 A Carrion Beetle That Isn't?

At first glance, the Garden Carrion Beetle, Heterosilpha ramosa, could be mistaken for a darkling beetle or ground beetle. Indeed, only the clubbed antennae, and the five tarsal segments comprising each "foot," betray them as something else (darkling beetles have only four segments in the tarsus of the hind leg). Carrion beetles make up the family Silphidae, but surprisingly, this particular species seems to have a diet of anything but corpses. 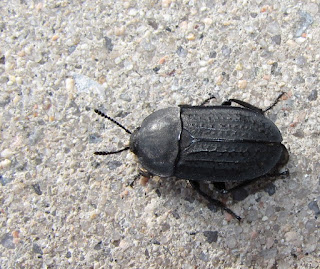 I periodically encounter the 11-17 millimeter long, dull black adult beetles crossing the sidewalk in my Colorado Springs neighborhood. The natural habitat here is shortgrass prairie, but I knew this beetle when I lived in the coniferous forests of Portland and Corvallis, Oregon, too. It occurs mostly west of the Rockies and south to Mexico, but ranges east and north as far as Iowa, Minnesota, and Ontario, Canada.

Consulting various references paints and interesting and evolving picture of H. ramosa. Older references used the genus name Silpha, but it is the portrayal of the species as at least an occasional pest that is puzzling. Essig declares that the Garden Carrion Beetle feeds mostly on decaying vegetable matter, but "also attacks garden and field crops, grasses, and weeds. If often occurs on lawns." Presumably it consumes these foods as both an adult and a larva. 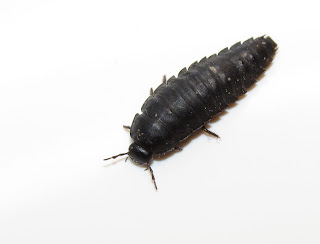 The larva is jet black, highly mobile, and resembles an overgrown carpet or hide beetle larva (family Dermestidae, especially genus Dermestes). The tapered body allows the larva to slither effortlessly into cracks and crevices, or easily slip out of a predator's grasp. The speed at which it can travel is rather surprising considering the relatively short legs at the front of the body.

A more contemporary book by Jerry Powell and Charles Hogue asserts that the "Garden Silphid" adults and larvae "are general feeders, consuming living or dead, soft-bodied insects such as maggots, which feed on decaying organic matter in the soil; Silpha sometimes feed on leaves of plants at night." 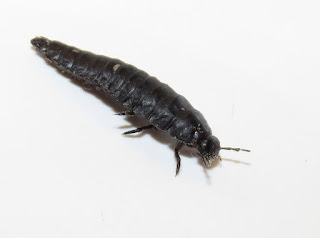 Arthur V. Evans and James Hogue illuminate the natural history of this species a bit more in the most recent reference I could find in my library. According to their Field Guide to Beetles of California, "The adult is active March through October....overwinters and becomes active the following spring. Eggs ar laid in the soil around a carcass or rotting vegetable matter and take approximately five days to hatch.....The larval stage lasts approximately two to three weeks. The pupal stage lasts 8-9 days." The authors go on to recite the previous conclusion that both the adult beetles and the larvae are "general feeders." 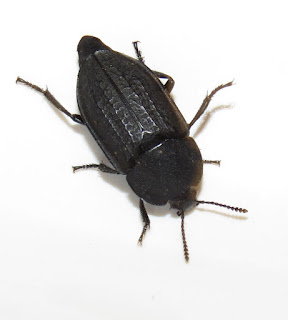 The evolution of our understanding of the impact of H. ramosa comes full circle, from minor crop pest to beneficial organism in the rest of Hogue and Evans' life history sketch: "The adult has been found feeding on dead Devastating Grasshoppers (Melanoplus devastator) and Brown Garden Snails (Helix asper)." Ok, so it is scavenging, but considering the predatory nature of other carrion beetles, it would be no surprise to find it killing injured or otherwise incapacitated pest invertebrates, too.

What else do we not know about this species, or any other insect for that matter? The answer is "plenty." Insects which are not perceived to be of economic importance, either positively or negatively, tend to be under-researched, to put it mildly. Outright ignored is perhaps an even better way to frame it. Pick a "bug," any bug, to study, and chances are you can be something of a hero. 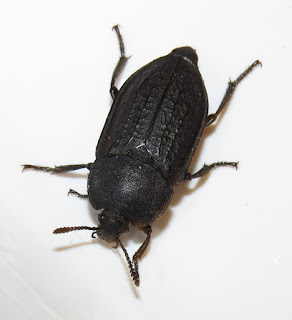