"Bug Eric" Out of the Office

Due to "upcoming events" that are happening currently (see column to the right), this blog will be on temporary hiatus. Many interesting posts will be forthcoming upon my return. Thank you for your patience! 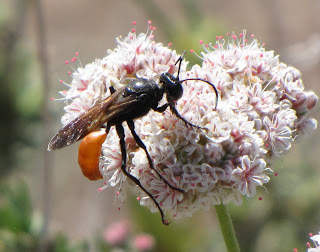 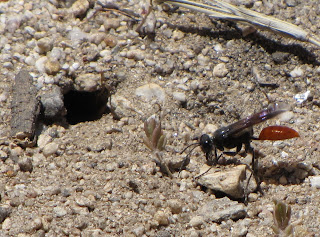 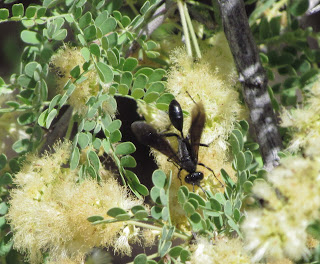 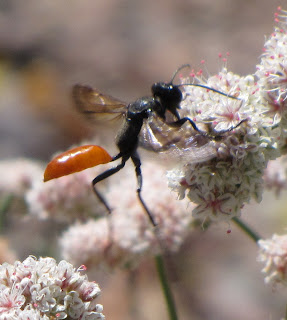 I am entering a couple of insect photography contests and I wanted to let the rest of you know about them while there is still time. Not that I want the competition, mind you, but there are some very talented photographers out there and I would love for them to have their images seen more widely, too. 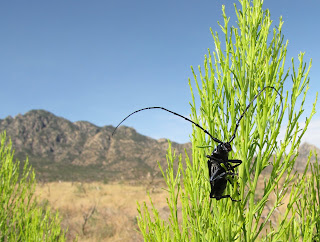 The first one is not really a contest, but the Entomological Society of America produces a calendar every year, and they always solicit images for it. Here are the entry rules. Note that you only have until May 16 to submit images.

The next one I am entering is more local. The “Pollinators in Action” digital photography contest is sponsored by Tohono Chul Park in northwest Tucson, in collaboration with the Pollinator Partnership, Bat Conservation International, and the Tucson Audubon Society. The subjects of the images must be species found within the state of Arizona. The contest is a celebration of National Pollinator Week, June 20-26, 2011. The entry deadline for this one is June 1, 2011. 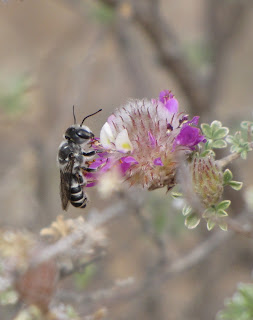 I know I would enjoy hearing about more such competitions myself, so please share any that you are aware of. Start your own for that matter. Artistic photography goes a long way toward educating people about the value of invertebrates by showing just how beautiful and industrious those creatures are. Good luck!

The sand wasps are among my favorite insects. They are incredibly industrious, colorful, and kill pesky insects like flies for a living. Members of the genus Steniolia are particularly ornate and I recently encountered a species new to me. I was hiking in Florida Canyon (pronounced Floor-EE-duh) in the Santa Rita Mountains of southern Arizona with Margarethe Brummermann on April 21 when we came upon some blooming thistles (Cirsium sp.). Several insects were visiting the blossoms, including males of Steniolia eremica. 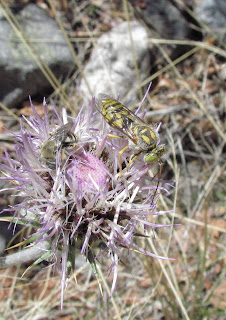 Ordinarily, these insects are highly vigilant and easily startled into flight. Spellbound by the nectar-laden thistles, these dudes were easily approached. Male sand wasps are larger than the females, and these were substantial insects by sand wasp standards, maybe 22 millimeters in length, or more.

This species was described fairly recently, in 1964, by James E. Gillaspy, the leading authority on the genus. He considered S. eremica to be less abundant than other species that share its range, from central Nevada south through Arizona, southeast California, and into Mexico. The adult wasps have been collected on the wing from March to August.

Not much is known about the biology of this species, though one female specimen in a collection is pinned with a robber fly (family Asilidae). The assumption is that the fly was prey of the wasp, but considering how powerful asilids can be, I wonder if the reverse was not the case. Female Steniolia in general hunt flies, paralyzing them with a sting, and then take them back to a burrow where the wasp’s larval offspring await their next meal. 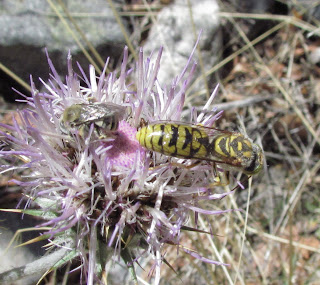 Besides my own personal observation of the males on thistle flowers, other nectar sources for the wasps include Palafoxia (Spanish Needles), Petalonyx (sandpaper plant), Melilotus (sweetclover), and Chilopsis (desert-willow). Steniolia have extra-long “tongues” to probe for nectar. The galea and glossa in particular are elongated and not retractable. These straw-like segments are tucked between the legs of the wasp when not in use.

Earlier in the “Wasp Wednesday” series I wrote about another species, Steniolia elegans. The basic biology is the same among all fifteen species. More information can be had in the form of revisions of the genus and documentation of California species. 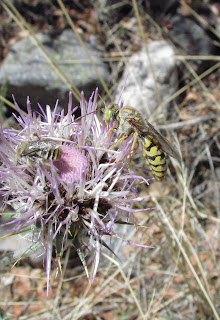