Apologies for the long periods between posts, but I do have an explanation, if not an excuse. I have been working on a mini field guide to common bees and wasps of Ohio that will be published by the Ohio Department of Natural Resources in early 2016. The text is now complete, though there may well be changes as things progress. I have also been contracted to write content for the blog page of a client I will reveal at a later date.

Additionally, I will be reviewing signage and creating supplemental content for the soon-to-open Missoula Butterfly House and Insectarium in Montana.

I must also prepare a presentation for the inaugural Pikes Peak Birding and Nature Festival in Colorado Springs, Colorado on Saturday, May 9, at the Bear Creek Nature Center. The topic will be "Colorado's Watchable Bugs."

I have been donating plasma the last couple of months and expect that twice-weekly routine to continue. Ironically, it helps establish something of a routine that better structures my time as well as providing a few extra dollars each month.

Meanwhile, I have been grossly neglecting the field guide to common U.S. spiders that I am contracted to write for Princeton University Press. I really need to break through the stagnation and make significant progress. Pronto.

Thank you for understanding that paying assignments take priority right now. I will do what I can for this blog as time permits, but I must look for still more work to keep us afloat financially. I always welcome suggestions for markets I can write for, nature festivals I can speak at, workshops I can lead, and other opportunities. I appreciate your help and support.

One of the more interesting insects I have found early in the spring this year is a picture-winged fly, Ceroxys latiusculus. Picture-winged flies belong to the family Ulidiidae, and they are among the more common, ornate, and entertaining of all Diptera, thanks to their lovely wing patterns and cute courtship behaviors. 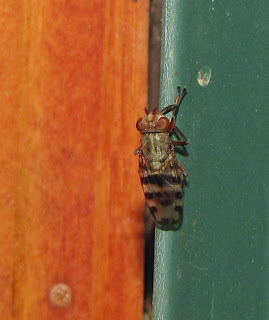 The Ulidiidae once went by the family name Otitidae, and this is where you will find them in older references. There are roughly 40 genera and 133 species known from North America north of Mexico. They are relatively average in size for flies, from 3-12 millimeters, depending on the species of course. Most have some kind of pattern of spots, bars, or lines on the wings, and at least a few have metallic bodies. 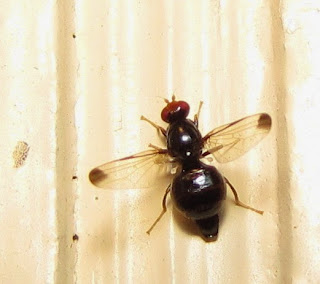 Many picture-winged flies can be reliably found on certain plants, dung, logs, rails of unfinished wooden fences, or the trunks of trees. These locations serve as food sources, basking sites, or display sites for courtship. Below is a video of behavior typical of picture-winged flies, though flies in other families also exhibit the wing-flicking thing. 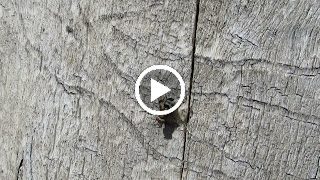 Ceroxys latiusculus is common throughout western North America, especially in spring and fall. In the larval stage it develops in the seed heads of plants in the genus Senicio, known as groundsels or ragworts. The adult flies apparently invade homes and other buildings in the fall, seeking winter shelter. 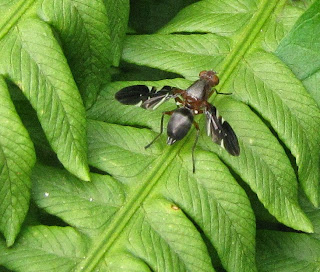 Back in the eastern U.S., Delphinia picta, 7-8 millimeters, is perhaps the most common picture-winged fly. It breeds in decaying organic matter such as compost. Consequently, it is a common fixture in gardens, as well as forest edges. Look for it on foliage or the ground. Idana marginata is our largest species, about 10-12 millimeters, and it is not uncommon in the northeast quarter of the U.S. Look for it at fresh bird droppings (yum!), or fermenting sap oozing from wounds in trees. At its size, it can easily be mistaken for a fruit fly (family Tephritidae), or some other dipteran. The larvae develop in compost. 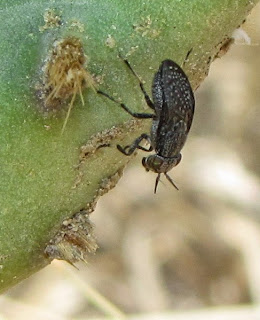 One of the more bizarre picture-winged flies is Stictomyia longicornis, which is found almost exclusively on prickly-pear cacti in the southwest U.S., and possibly elsewhere cacti occur. Indeed, it has been reared from rotting cactus pads. The adult flies are only 4 millimeters long, but look more like true bugs or beetles than flies. The wings are short and plastered to the back of the fly. They rarely take wing, either, preferring to dodge between bundles of cactus spines. 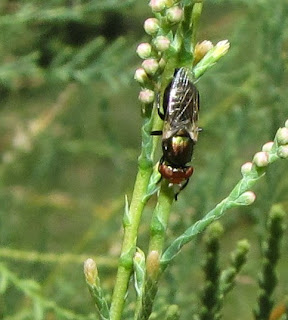 Physiphora alceae is rather atypical in that it lacks bold markings on the wings. This species, about 5 millimeters long, is not native, but its exact point of origin is not easily defined. It is now considered "cosmopolitan," and likely to turn up anywhere in the U.S. Look for the adults on flowers. The larvae feed in decaying plant matter or animal dung. 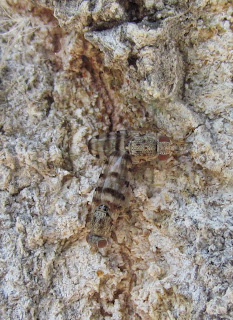 The two species of Pseudotephretina closely resemble Ceroxys in size and appearance, but the bars on the wings are more "tiger-striped" and complete than in Ceroxys. These flies are closely associated with poplar and willow trees, but look on the trunks of cottonwoods as well.

One of the more common and attractive ulidiids to be found in southern Arizona is Diacrita costalis. It also ranges into southern California, New Mexico, and Texas. I typically found it in shaded situations during the day, such as under rock overhangs, or covered patios. They are also attracted to bird feces. 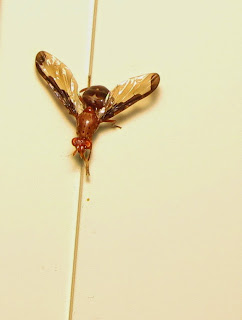 Perhaps the most adorable species are in the genus Callopistromyia. They are only 3.5-5.5 millimeters (usually on the lower end of that spectrum), but absolutely captivating in their behavior. Males can be seen on fence rails or logs where they erect their patterned wings perpendicular to their bodies, then sidle this way and that. C. annulipes is called the "Peacock Fly" in reference to this display. Here's a brief video that illustrates the behavior. The larvae live under bark, but their diet is apparently unknown. Look for these insects throughout the northern U.S. south to northern Georgia, Louisiana, Oklahoma, northern Utah, and Washington state. C. strigula occurs in Canada and the northeast U.S. 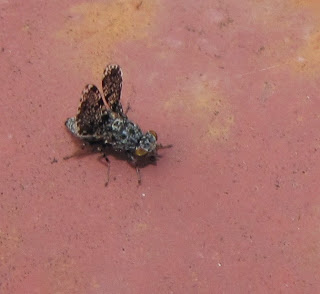 I think you get the "picture," pun fully intended. This is a diverse family of flies that for a change are rarely, if ever, pests (the six Tetanops spp. live as larvae in the roots of living plants), and that have unique behaviors and lifestyles. Enjoy hunting for them. 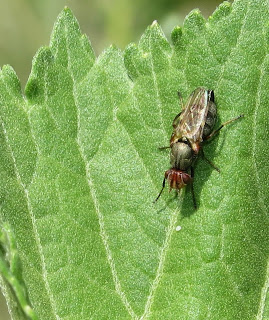 The internet has made the scientific community vastly more accessible to the general public, but social media has taken that to yet another level. Whereas it once took hours, if not days, of research to get an answer to a question, or the identification of an organism in an image, success can now be had in minutes. Facebook in particular has exploded with specialized "groups."

No matter how offbeat your entomological interest there is no doubt a Facebook group devoted to it. Are you a moth fanatic? Ha, so are over 3,300 other people who have already joined the "Mothing and Moth-watching" group.

You might worry that the membership represents a "blind leading the blind" assortment of amateurs or newbies, but most of the time there are plenty of professional entomologists and experienced citizen scientists offering help, sharing announcements of new research, or simply posting stunning images. Take the "Hymenopterists Forum," for example. I have queried this group a number of times with images of wasps, bees, or ants that I was having trouble identifying. I am always met with courtesy and respect, though I am careful not to post too much, too often.

Are your interests regional in nature? New groups continue to sprout which are regionally-centered geographically. I know because I have started four of them myself. Maybe you want to know more about dragonflies and damselflies of the southeast U.S. Voila! "Southeastern Odes" is at your service.

One of the most wonderful aspects of Facebook groups is that they usually have a global membership, and you can always stand to learn from others in far-flung locations around the world. The "Friends of Coleoptera at the Natural History Museum" group reflects beetle experts at the museum in London, England, for example, but they are incredibly friendly to everyone, and highly knowledgeable of beetles from all over the planet.

Still can't find a group that suits you? The answer is easy: create your own. Facebook makes the process of founding a group very easy and relatively intuitive. Do pay attention to the settings ("public," "closed," "secret"), and be mindful that as an administrator you will need to be vigilant to welcome new members, delete spam and its originators, and post regularly to keep your group on the Facebook radar.

I had to be metaphorically dragged into social media back in 2009, but I could not be more grateful to those who nudged (pushed?) me into it. Through Facebook I have made many new friends in the truest sense, learned more than I could have imagined, and helped others. I highly recommend taking full advantage of social media avenues in your own pursuits.