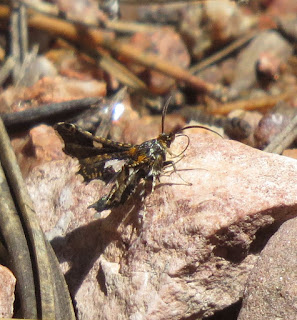 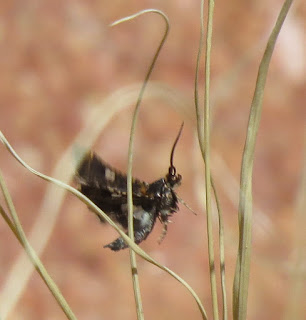 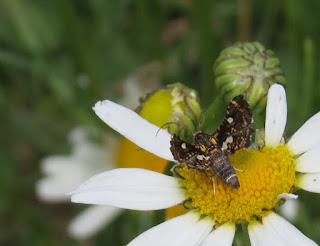 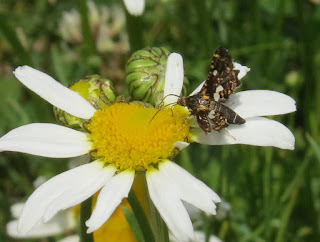 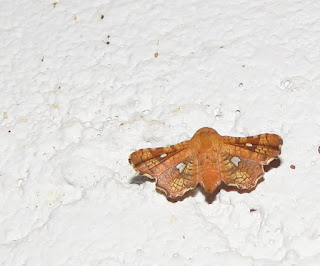 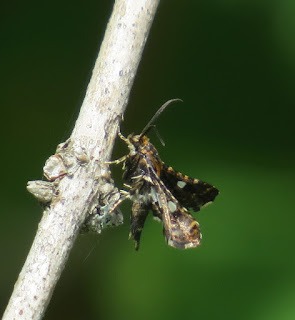 Another Rarity: Nysa Roadside-Skipper in Colorado

This is what you get for exploring, observing, recording, and being curious: Surprises. I am not well-versed in things butterfly, but I do know when I haven't seen a particular species before. Even if I cannot say anything about a creature in the field, I can go and research it later. Such was the case of the Nysa Roadside-Skipper encountered on Monday, May 15, in Lamar, Prowers County, Colorado.

It always starts innocently enough, and sometimes results from disappointment over something else. I would much rather find interesting wasps, beetles, grasshoppers, and true bugs instead of butterflies, but it so happened that recent bad weather (a cold snap a couple weeks ago and heavy rains more recently) left little to find besides Lepidoptera in Lamar. Some Lepidopterist out there is going to make me envious by finding a cool wasp now. 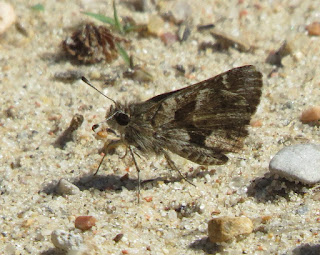 So, my wife, Heidi, and our mutual friend Jill White Smith, took the field looking for birds and whatever other wildlife we could see. Jill is a very accomplished photographer. You can see her work at Nature Made Photography on Facebook, in fact. She does "people photography," too, as she puts it. She is also very generous and welcoming, and eagerly showed us around to her favorite haunts.

One of those habitats is an abandoned, unpaved road that is quickly becoming part of a dune or sandhill adjacent to the riparian corridor of Willow Creek, south of the Lamar Community College campus. Flies, damselflies, a few bees, and butterflies flew up every few steps. I happened to notice one small one land in the road, and I focused my camera. I could tell it was a skipper, but not one I had ever seen before. I had left my field guides at home, but that only served to build suspense.

We got home from the three-plus hour drive around eleven at night. After unloading the car, I consulted my Kaufman Field Guide to Butterflies of North America. Thanks to Jim Brock and Kenn Kaufman, I quickly found my mystery skipper: the Nysa Roadside-skipper, Amblyscirtes nysa. The only "problem" was that the range map for the species does not include Colorado. Heidi did a bit more research and found only one Colorado record online at Butterflies and Moths of North America (BAMONA), and no Colorado records on Bugguide.net. I consulted an old book, Butterflies and Moths of the Rocky Mountain States, and found no historical records for Colorado.

What do we know about this insect? Its known range is from Mexico, southeast Arizona, southern New Mexico, and the western two-thirds of Texas north and east through Oklahoma and the eastern two-thirds of Kansas, barely crossing into Missouri. There are between one and three generations ("broods") each year, depending on the geographic location of a given population. The caterpillars feed on grasses. The Kaufman guide adds: "Males perch in wash bottoms, road depressions, or along trails very early n the morning before retiring to shade for the afternoon." This guy was overdue for a nap, then, at almost 10:00 AM.

We also saw what I thought was a small Common Sootywing, but it turns out what I saw was the dorsal (top) view of this same skipper. I narrowly missed an opportunity to get a shot, but here is one of a specimen in Arizona: 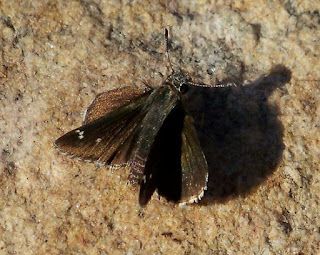 Lastly, while taking images of the skipper, I noticed what might be the cutest beetle ever. I had to bring it home to get images. As near as I can tell, it is a darkling beetle in the genus Edrotes, for which there are also no Bugguide records for Colorado. 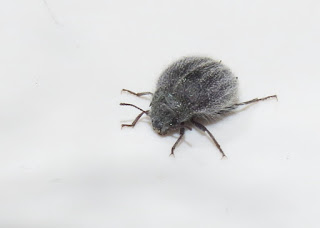 Discoveries like these await you, too. You do not have to know what you are looking at to enjoy the moment, capture it in pixels or digital video, and share it with others. You explore and observe often enough and long enough, and you are almost guaranteed to find something truly unusual, or even unknown.