It is “OrThoptera Thursday,” and time to introduce you to a common springtime grasshopper, the Speckle-winged Grasshopper. It goes by Arphia conspersa in scientific circles. 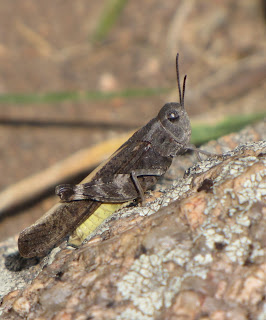 Ordinarily, I would be seeing fair numbers of this insect by now, and indeed they are slowly becoming more abundant as the weather warms from an unseasonably cold early spring here along the Front Range of Colorado. Warmer enclaves have more activity, such as around Pueblo and Cañon City. Last year I saw adults of this species on February 29, but then again we hardly had a winter.

Arphia conspersa is very widespread in its distribution, occurring from the Great Plains westward, north to central Alaska and south to central Mexico. It exploits a variety of habitats, from meadows up to 11,000 feet in elevation to desert canyons. Pastures, open fields, and vacant lots are where one is most apt to encounter it, even in highly urbanized areas.

Identifying the Speckle-winged Grasshopper can be surprisingly difficult because there is so much variation from one individual to the next. The overall color may be brown or grey with varying degrees of darker mottling. Many specimens sport a bright yellow “racing stripe” down the back when the wings are folded at rest. The tibia (“shin”) of the hind leg is often bright yellow (as can be the abdomen of males), but the tibia is usually concealed under the edge of the femur (“thigh”) unless the grasshopper is walking. 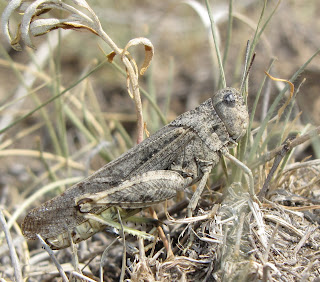 This species is one of the “band-winged grasshoppers,” named for the pattern on the hind wing. Unfurled, the hind wing is brightly-colored at the base, with a dark submarginal band across the outer reaches. The hind wing of Arphia conspersa may be colored yellow, orange, red, or even pink, but is only visible during the short flights made by the insect.

Males of the Speckle-winged Grasshopper are more likely to be heard than seen. Part of the courtship involves what are called “appetitive” or “crepitation” flights. The male purposely flies a short distance, making a loud crackling sound at will in the process. This visual and audible display apparently attracts the attention of the female. 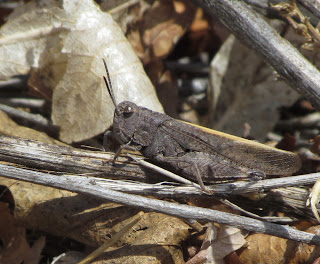 A male can detect a female from a distance of at least two feet when both are on the ground. Considering how incredibly well camouflaged these insects are, that is no mean feat. He will approach by running, stopping and stridulating, and then repeating the process until he is next to his prospective mate. Stridulating is accomplished by rubbing the inside of the hind femur against ridges on the folded front wings. A faint chirping noise is generated by stridulating. Once in close proximity, the male orients to the female face-to-face, and they wave their antennae at each other. More complexities then ensue before she decides whether to accept his advances.

Mated females select patches of bare earth in which to lay their eggs. The abdomen of the female is capable of telescoping at least two inches while inserted into the ground. At that depth she deposits a pod of about twenty eggs. 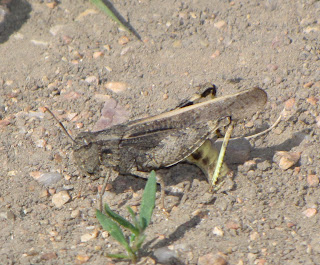 Nymphs of Arphia conspersa begin hatching from the eggs in about mid-July, and go through a total of five instars (an instar is the period between molts) before reaching adulthood. The nymphs typically get to that fifth instar in late autumn, then overwinter. Exactly how they manage to survive is something of a mystery, but experiments have shown at least some specimens can withstand temperatures of -16°C for short periods. 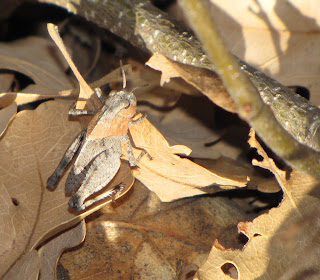 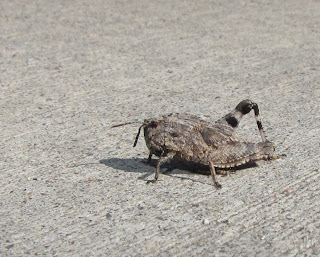 The fact that this is one of the few larger grasshoppers to be found as an adult in early spring makes its identification a bit easier. There are simply fewer similar species to confuse it with. Thankfully, this insect is never abundant enough to be a pest, either, even though it certainly consumes a fair amount of forage in the form of grasses and sedges.

You, dear reader, deserve an explanation for my recent absence. Lately, I find myself increasingly disillusioned about whether to continue this blog. The possibilities for posts are endless, that is not the problem. Whether I am simply “preaching to the choir” is one concern, but continuing to provide these posts for free is a much more pressing issue.

The response has been good, and I continue to get praise for which I am genuinely grateful. Honest, I truly appreciate that you appreciate what I do. However, my life has changed dramatically since I first began this blog. I got married, and with that blessing comes the added responsibility of providing at least a modicum of a financial contribution to the relationship. I do not have a traditional “job” of any kind, and those are becoming harder to come by anyway. My revenue stream is drying up as magazine markets for my writing continue to dwindle, either folding outright or ceasing to use freelancers. Almost nobody with an internet presence is willing to pay for content.

It becomes tiresome and guilt-generating to be begging for donations to this blog. I am not PBS or NPR. It is not my intent to coerce monetary remuneration from anyone who follows this blog. For all I know, most of you are in the same boat I am in, unable to spend much on anything but essentials and the odd splurge of a dinner out.

The other problem I face is purely personal. I am prone to mild depression and anxiety, and my writing suffers periodically because of that. I know that I have also grown weary of providing “virtual” experiences online and would much rather be getting together with my colleagues and “fans” in the field where we can look at actual, living organisms. There is no substitute for sharing in the real world.

I need your help to become the “go-to guy” for entomology at nature festivals, Master Naturalist workshops, ecotours, and other events. I need to be pointed toward hidden markets for my writing, too, from regional and local magazines to book publishers.

For the time being at least, posts here will be sporadic as I concentrate my efforts on finding projects and clients that have at least slight economic potential. You have my apologies, but I hope that I have your understanding. Thank you.