Talking About Writing, Entomology, and SciComm With Arthro-Pod

After recording an episode of Ologies with Alie Ward that focused on wasps, I was delighted to be invited to interview with the three hosts of the Arthro-Pod podcast more recently. Our discussion ran the gamut from my career trajectory in science communication to unresolved problems in the entomology profession, and conflicts between science and the corporate sector. This was a much more personal conversation.

Dr. Jody Green (@JodyBugsMeUNL on Twitter), Jonathan Larson (@bugmanjon), and Dr. Michael Skvarla (@mskvarla36) are the hosts of Arthro-Pod. All three currently work at separate universities, but have a common passion for public outreach. According to Jody, I was “SciComm before it was SciComm,” and until she said that it had never occurred to me that I was any sort of pioneer. It is true, though, that I have witnessed, and often participated in, the evolution of the public face of entomology in the digital age. She added that she frequently uses my blog to research a particular insect or topic and enjoys the jargon-free, conversational format. Wow, how cool is that? 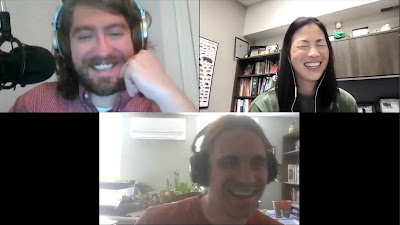 The hosts of Arthro-Pod from a prior recording

In the course of talking about my personal experiences in academia, and my sentiments about them, ancient as they are, it was surprising to learn how much still resonates with students of today. That is a great thing in terms of empathy, but it also indicates there is much that still needs rectifying in the university environment. How do we make the sciences more friendly to a diversity of students? How is virtual learning online succeeding or failing its target students? We did not even discuss the problems with academic publishing, but maybe we can do another episode about that. 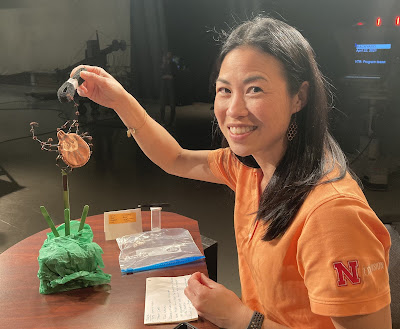 Entomology is a broad field with many niche careers that were not even in existence when I was a student. The profession is also now faced with the conflict that is the continued need for pest control versus the ever-increasing challenge of conserving biodiversity. Our global knowledge has been obtained largely through colonialism. There has been rampant sexism and, until recently, little effort at welcoming all races and ethnicities, and recognizing the full gender spectrum. Thankfully, the current generation of entomologists is prioritizing positive changes to those issues.

I hope you will join me in following Arthro-Pod here on the Blogger platform. My interview was the 96th episode, so I have a lot of catching up to do. You could not ask for a more friendly and inquisitive trio to take you on a tour of entomology and its influences on history, your daily life, and ecosystems at large. 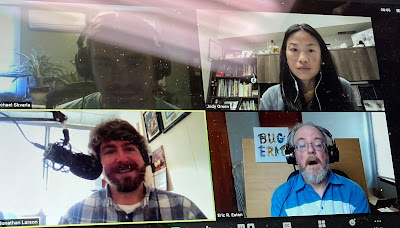 Hahaha, I didn't know anyone would take a photo during our Zoom

Note: I have several events upcoming. They include a virtual presentation about wasps for Waterloo (Ontario, Canada) Region Nature on Monday evening, September 27. On October 4, I will be recording an episode of Talking Feral with Paul Boyce, topics to be determined. I will be recording a wasp-themed episode of In Conversation With with David Lindo, for BBC radio if I have the correct information. Lastly, on November 6, I will do another wasp-themed virtual talk for the Entomological Society of Pennsylvania (USA). Please join me for the talks, and/or book me for your own event by e-mailing bugeric247ATgmailDOTcom. Thank you.