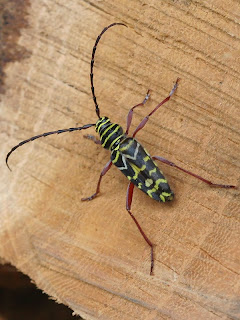 The fire is so delightful….until there are beetles flying around the den, the cat is chasing them, and the children are panic-stricken. It does not often occur to people that the stack of firewood on the hearth could be the source of the sudden appearance of insects indoors.

Chief among the consumers of dead wood are beetles of several families. The larvae bore in the wood, and adult beetles chew their way out when they have completed metamorphosis. The “painted hickory borer,” Megacyllene caryae, a member of the longhorned beetle family Cerambycidae, frequently emerges early when wood is stored indoors. Complicating the matter is that the insect is brightly marked in black and yellow, much like a wasp. It flies well, too.

You need not worry, the beetles will not turn to structural beams in your house for their next feast. The adults don’t feed, and the females lay their eggs only in untreated wood. Further, their larvae can often survive only if their mother locates the right species of tree, at the right age of decay, with a certain moisture content, etc. So, relax. Go back to lounging in your favorite chair, delighting in the crackle and pop of the embers, and the warming flames.

The majority of questions that I receive at AllExperts.com are, perhaps surprisingly, from women. Even more encouraging, the questions are usually intelligent and do not give the impression that the person is panic-stricken. Why do women ask the questions? I have a theory, and it doesn’t have much to do with men not wanting to stop and ask for directions.

Women in American society, at least, are also on the front lines of the household and the workplace. They are the first to notice insects and spiders trespassing in the home or office. Their protective motherly instincts kick in, and their first priority is to determine the identity of the intruder and understand whether it poses a health threat to their family, co-workers, pets, houseplants, pantry, or property. They want to know, ideally, if there is a way to confront the creature that avoids using insecticides or other toxins. A few are truly concerned about acting humanely toward the organism.

Oddly, the questions I get from men are frequently nostalgic. They are curious about insects and other arthropods they saw decades earlier. One gets the impression that (a) they have too much time on their hands and (b) they are thrilled that the Internet now gives them the opportunity to pose such questions to an expert that was previously less accessible.

The challenge now is to increase the opportunities for interaction between the scientific community and the general public, and improve the accuracy of information available on the Internet and through broadcast media. We need to fairly compensate science writers for providing just those services, but that is a topic for another day.

In honor of Valentine’s Day, it seems only appropriate to post about “lovebugs,” the common English name given to a type of march fly known as Plecia nearctica to scientists. “March fly” is the name for all species in the family Bibionidae, among the most abundant and conspicuous of early springtime insects.

Lovebugs can indeed create quite a spectacle, forming massive swarms in the southeastern United States, especially in Florida. The spectacular mating rituals are not considered romantic at all by anyone driving through them in an automobile, especially a convertible. The insects are only 6-9 mm long, but the males (with big, bulbous eyes) and females (tiny heads) often fly in tandem. The pair might appear at first glance to be either Siamese twins or one, two-headed macro-monster.

Fortunately, the phenomenon is very short-lived, and happens only twice each year, once in the spring, with a second generation in the fall. Thankfully, the flies are also harmless, not biting people or pets or causing damage aside from potentially slick, greasy roads (ugh!). More information can be found at an excellent website from the University of Florida Institute of Food and Agricultural Sciences here; and some nice images are over at Bug Guide.

May your own romantic adventures be just as joyous and fun as those of the lovebugs, but altogether free of the hordes of the insects themselves.