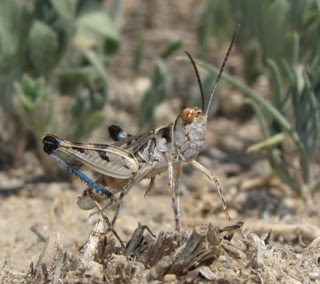 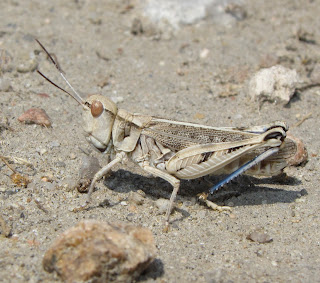 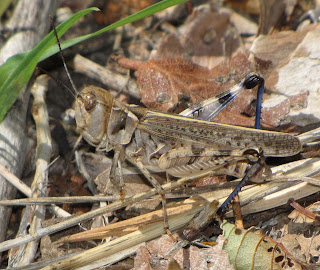 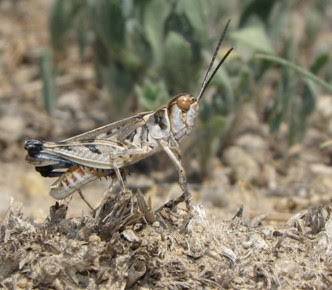 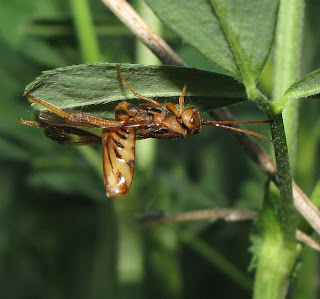 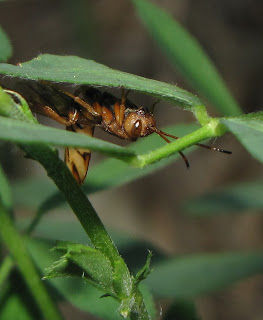 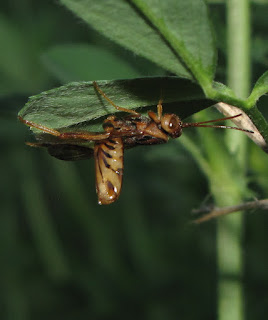 My wife and I went down to Fountain Creek Regional Park in Fountain, Colorado recently (the evening of June 2, 2013), and I happened upon an interesting scene. About five or six female mason wasps, Symmorphus sp., were nesting in beetle borings in a cottonwood log by the side of the trail. About four cuckoo wasps, Chrysis sp., were hanging out around the holes the wasps were using as nests. Heidi said I must have spent 45 minutes taking pictures of them all, but it was worth it because I got to observe what was happening. 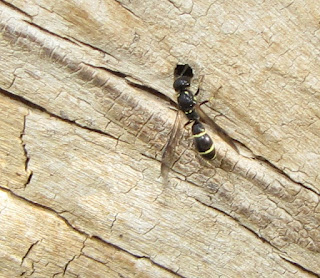 The above image is one of only two really nice shots I got of the female Symmorphus mason wasps. They would alight near their nest hole, and dive in very quickly. If I approached too quickly with the camera, the wasp would fly off before entering. If I waited too long, I would get a shot of the wasp’s abdomen disappearing, or a seemingly empty hole. Waiting for the wasp to emerge was basically futile, as she would exit much more quickly than was possible to focus. 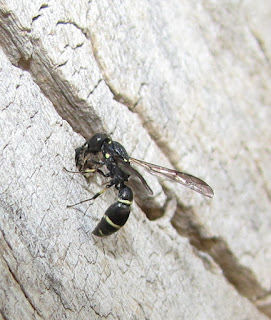 You have to have an appreciation of the size of the players and the beetle borings to know what I was up against. The borings are probably the exit holes of deathwatch beetles, family Anobiidae, which bore in dead, solid wood as larvae. The diameter of each hole is about the same as the end of a retracted ballpoint pen (about 3 millimeters). Yes, both the mason wasps and cuckoo wasps could fit through those holes.

”Science has strict rules against anthropomorphism, but if you ask me, those chrysidids were cunning and calculating.”

Meanwhile, the bright metallic green cuckoo wasps were not as easily disturbed as the mason wasps. They might run randomly around between holes, but most of the time they sat quietly in the vicinity of a group of holes. Science has strict rules against anthropomorphism, but if you ask me, those chrysidids were cunning and calculating. They were waiting for the wasps to show them which holes were active nests worthy of their attention. 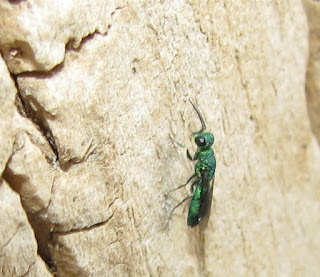 Cuckoo wasps are parasitic in the nests of other solitary wasps. They can’t sting, but the last few segments of the abdomen of the female telescopes into an egg-laying organ that can reach into the bottom of one of those nest tunnels. The cuckoo wasp lays an egg in the nest of its host, and the larva that hatches generally consumes the meal intended for the host offspring.

In the case of Symmorphus, females catch and paralyze leaf beetle larvae that are free-living, or are leaf-miners (living between the layers of a leaf). At least one species of Symmorphus attacks leaf-mining moth caterpillars on occasion. The larval victims are packed into a cell along the length of the beetle boring, and the mother wasp lays her own egg on the last victim. She then creates a partition of mud or chewed wood fibers, and begins a new cell. The process is repeated such that several cells usually occupy one tunnel.

The mason wasps, for their part, were also quite cognizant of the cuckoo wasps. I witnessed at least one altercation whereby a female mason wasp fended off a too-eager chrysidid at the entrance to her nest. Cuckoo wasps, while they can’t sting, have a dense, pitted exoskeleton that effectively repels the bites and stings of their hosts. They can even roll into a ball as a last resort, becoming virtually impregnable. 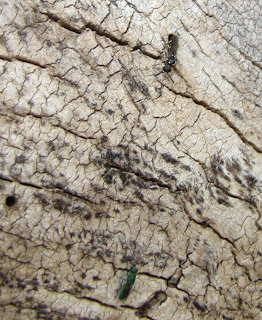 Without collecting specimens of the wasps, which I did not do, I cannot conclude the species I was observing. Process of elimination narrows the possibilities to Symmorphus cristatus or S. canadensis for the mason wasps. The cuckoo wasps could represent one or more species in the Chrysis coerulans species group. Scientists are still trying to sort out how many species there actually are in that complex.

After getting up from my baseball catcher’s stance, I could feel how my legs had stiffened. The pain was worth the gain, though, and I encourage my readers to endure for the sake of personal and collective knowledge. Field observations are not the scientific priority they once were in the fledgling years of ethology (study of animal behavior). It could easily be you who makes history with a new host record for a predator or parasite, or records some other hitherto unknown association between species. 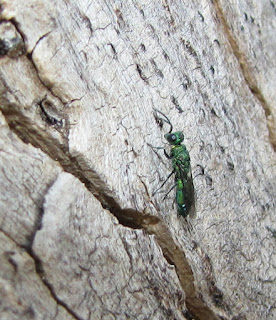