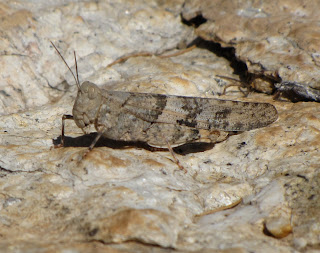 This afternoon I was privileged to be interviewed by Delane Cleveland, a reporter for FOX News 11 at 9 regarding a sudden increase in the local grasshopper population. The insect in question is the Pallid-winged Grasshopper, Trimerotropis pallidipennis, normally quite abundant as it is, but occurring now in numbers that can be disturbing to some people. It pays to put this population boom in perspective, however, and to let people know of easy ways to deal with them while they are here.

The Pallid-winged Grasshopper is a member of the family Acrididae, or “short-horned grasshoppers,” named for the short antennae (in contrast to katydids and crickets which have very long antennae). While some members of this family have a truly migratory phase called a “locust,” this species flies shorter distances in vastly smaller numbers.

Locusts represent an actual physiological change in the body of a normally solitary species, triggered by crowding to the degree that the young (nymph) insects are literally rubbing elbows with each other. This physical contact causes them to not only become more gregarious, but leads to a sleeker, longer-winged adult than usual. Nymphs of locusts will march in armies, devouring nearly every green piece of vegetation available. As they grow, eventually molting into adults, they retain their social nature. Pushed by strong storm fronts, they fly hundreds of miles, continuing to lay waste to the landscape.

There is historical documentation of infrequent outbreaks of the Pallid-winged Grasshopper, much more severe than we are seeing currently, that were problematic in rural, agricultural areas in Arizona. This year’s population represents a mere nuisance by comparison.

Should you still worry, what do you do? Pallid-winged Grasshoppers feed primarily on grasses, but will also eat some herbaceous vegetation (called “forbs”), so homeowners may wish to cover such vulnerable plants in the garden during the grasshoppers’ layover. Also, the grasshoppers are attracted to lights in droves during the overnight hours. Simply turning off outdoor lighting will help to decrease their numbers, at least in your own private yard. Consider wearing sunglasses, as some errant ‘hoppers, disturbed by your footsteps, may fly up in your face. Please avoid the use of chemical controls, as those poisons can be harmful to the natural predators of grasshoppers, such as spiders, birds, and lizards. Remember, such population increases are temporary, a fleeting blip in nature’s seasonal time frame.

My compliments to Mr. Cleveland and his videographer for producing a fine story, free of the sensationalism that the media often adds to such natural phenomenon. Stay tuned for more on grasshoppers, and other insects you are likely to encounter throughout the year.