Another pursuit I wish I had a separate lifetime for is scientific illustration. I like the challenge of trying to render an organism realistically. Sure, it takes some talent to do that, but I owe a great deal of my success to teachers and mentors.

I met the late Elaine R. S. Hodges in 1986, while I was on contract at the National Museum of Natural History (Smithsonian) in Washington, DC. She was a staff artist in the entomology department, and took me under her wing. She was the “Founding Mother” of the Guild of Natural Science Illustrators, the gold standard for professional medical and biological illustrators. She was encouraging, but critical of my own work, and I took her words to heart.

I began doing illustrations to compliment articles I was writing as a volunteer for The Urban Naturalist, a quarterly publication of the Audubon Society of Portland (Oregon). I was further encouraged and inspired by the other volunteer artists on the “staff,” like Martha Gannett, Kris Elkin, and Elayne Barclay. 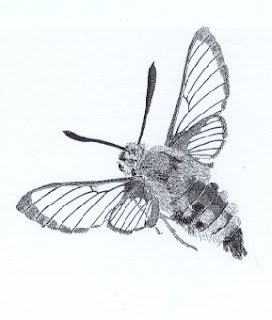 The Urban Naturalist ceased publication in the late 1990s, but by then had caught the attention of the Oregon Historical Society Press, which published a compilation of articles and essays in the book Wild in the City, edited by Michael C. Houck and M. J. Cody (2000).The above pen and ink illustration of a Snowberry Clearwing moth, Hemaris diffinis, is one of those featured in the book.

The adult “Ponderous Borer,” Ergates spiculatus, shown below, started as a sketch back in the early 1980s. The outline version appeared in the book Cascade-Olympic Natural History, by Daniel Mathews (Raven Editions, 1988). I had been asked by Dan to do the insect illustrations for his book, but did not follow through in a timely manner. He deemed the line drawings acceptable as is, but I was embarrassed. 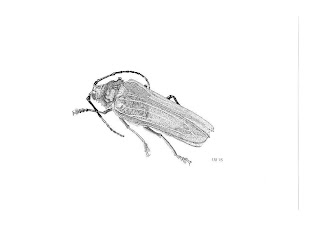 Imagine my surprise, then, when Mathews got back to me in 2001 and asked if I would do illustrations for his book Rocky Mountain Natural History (Raven Editions, 2003). Dan had been impressed with my work in Wild in the City, and wanted that kind of quality for his own book. This time he had a budget to work with, and I had a much more professional attitude. The result was eighteen pen and ink illustrations for the book, including a finished Ponderous Borer.

I also submitted this illustration for the annual member exhibit of the Guild of Natural Science Illustrators in 2005, and it was accepted. It was displayed in the Jacobs Gallery at the Hult Center for the Performing Arts in Eugene, Oregon, for much of June, 2005, alongside the work of other GNSI members. My mentor Elaine Hodges complimented me on how far I had come as an artist, and that was even more of a personal honor. The framed picture now hangs in the office of Carl Olson, Associate Curator of Entomology at the University of Arizona. Carl is another mentor, and it was the least I can do to present that as a gift for all the favors he has done for me over the years.

While I am fairly proficient in pen and ink, and graphite pencil (see the pair of Nicrophorus sexton beetles below), I someday hope to learn to render animals in color, and maybe with digital software, too. The field of scientific illustration continues to change, but seems to remain in demand. 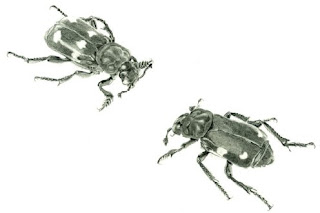