Jeers for Cheerios? Not so Fast

I am not sure whether it is a good thing or a bad thing that politics and consumerism are infiltrating the world of entomology, but in the case of General Mills versus....science, controversy could be a good thing if it informs the cereal-buying public. The well-intentioned corporate advertising campaign aimed at benefiting pollinators has hit a few snags, and the ramifications for future like-minded endeavors are complex. Partnerships with conservation organizations are, however, an excellent outcome. 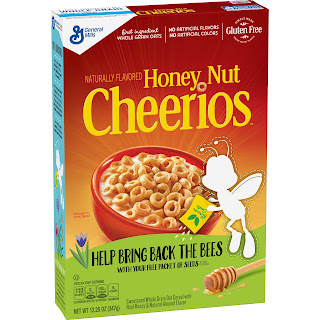 When the Honey Nut Cheerios® mascot "Buzz the Bee" disappeared from the cereal box to call attention to the plight of honey bees (and ostensibly the decline of all pollinators), it seemed like a genius marketing gimmick. Add the promise of receiving a packet of "wildflower" seeds to sow in your garden if you simply request them, and you have a win-win-win love affair at first blush. Who could object to stimulating environmentally-friendly action on behalf of imperiled insects like the Rusty-patched Bumble Bee, just added to the Endangered Species List? Well, it turns out that knowledgeable botanists and entomologists can object, and do so strenuously and effectively.

The major problem stems from the seed packets that General Mills is dispensing, in partnership with Veseys Seeds. They are a "one size fits all" solution to a complex problem, and therefore no solution at all according to many scientists weighing in. There have been charges that certain flowers in the seed mix are not only not native to North America, but invasive species in some areas. Homeowners are certainly better off purchasing native cultivars at their local nursery, if only because native plants are better suited to local soils and regional climate.

Another frequent complaint directed at virtually all pro-bee propaganda is that the sole intended beneficiary is the honey bee. Apiculture, it could be argued convincingly, is an industry, complete with large scale marketing, lobbyists, and other attendant business arms. The honey bee is not native, having been brought to the settlement of Jamestown in 1621 or 1622. Today, migrant beekeepers truck their hives across the country to pollinate various orchard crops, especially almonds. While Honey Nut Cheerios™ contains no nuts, it does contain "natural almond flavor." Interesting.

This is not to say that General Mills is without good deeds for pollinators in...general. Check this out, from personal correspondence with my friend Matthew Shepherd, Communications director for the Xerces Society, a non-profit organization devoted to invertebrate conservation:

"GM [General Mills] is partnering with the NRCS [Natural Resources Conservation Service in the U.S. Department of Agriculture] to support a half-dozen new staff biologists, who will be employed by Xerces and based in NRCS offices. GM and the NRCS have each committed to providing $2 million—a total of $4 million—over a 5-year period. You’ll find more information about what the staff will do and where they’ll be based at here. For an overview of the partnership, and the press release, [click on the links].

"We’ve [Xerces] got other partnerships with various GM brands (Muir Glen, Cascadian Farm, Annie’s), but any dollars from those, often tied to sales of a product, will be part of the $2 million above.

"Xerces also has a contract with GM to work with their suppliers to create habitat on farms. We’ve already done some of this in California, planting hedgerows along tomato fields and hedgerows and meadows in almond orchards, and in Washington around blueberries, but this will be spreading across the country to farms supplying all manner of products. This is another multi-year agreement. I’m afraid that I don’t know what the total dollar amount will be over the years. Hundreds of thousands for sure...."

I happen to like General Mills and Cascadian Farms products, so I am happy to be benefiting the Xerces Society when I make those purchases. I am also glad that I learned what is going on behind the headlines, which were far from flattering initially. Meanwhile, my next post will revisit a workshop I attended back in March that speaks to the future of pollinator conservation at the homeowner-level. Stay tuned.