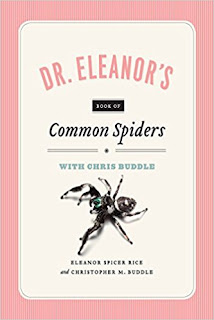 One resource that has been missing from the recent explosion of spider-related material coming from various publishers has been a book aimed squarely at the average homeowner or gardener with something other than an all-consuming passion for arachnids. "Dr. Eleanor" to the rescue with Dr. Eleanor's Book of Common Spiders (Chicago: The University of Chicago Press. 2018. 96 pp.).

Eleanor Spicer Rice, who already has several related titles under her belt, mostly about ants, has teamed up with Chris Buddle to deliver a nicely organized, thoroughly researched book on the spider species that the public most often asks about. You know, the eight-legged critter crawling across the kitchen floor, the infamous "shower spider," and the ones you always see in the (insert shed, basement, garage, or other appropriate venue).

The authors treat their subjects with accuracy, clarity, and brevity, while still managing to cultivate the same sense of fascination in the reader that they, as scientists and writers, have already found for themselves. This is no small feat. There is a dash of humor here and there as well, and they are not above poking fun at themselves. Color photographs, mostly by Sean McCann, complement the lively text and enhance the impact of the book. Whether arachnophobes will reach for it on the bookstore shelf, or over the online vendors remains to be seen. I hope they do.

Even if the book were a complete failure otherwise, it would bear recommending for this passage alone:

"Striped lynx spiders prefer biding their time in agricultural fields. When we plant our crops with only one or two types of plant per field, we humans essentially sow arthropod grocery superstores. In nature, any given species of plant is often mixed in with other plant species and so bugs that like a particular plant species may need to search to find the plansts they like. As a result, only a limited number of bugs can live in an area. It's like living in a town with a gas station-sized grocery store. In our human-planted superstores, however, tons of insects that like our crops can move into the giant all-you-can-eat buffet of a farm, filled with only their favorite foods. These insects become agricultural pests, gobbling up billions of dollars' worth of food we grow for ourselves each year."

Exactly. I have said the same thing myself in my own publications, about how humans are responsible for creating their own insect pests. Further, all the crop plants are equally vulnerable because they have identical genetics. Not so in nature. Watch a butterfly laying eggs. She won't oviposit on every plant; only on those a little weaker in their chemical defenses.

My only quibbles with the book stem mostly from the fact that I am a writer, too. There were a couple of bad word choices, but I see worse errors in other books. There was one implied assertion that is incorrect, however. In the Frequently Asked Questions part of the back matter, one FAQ concerns whether all spiders are venomous. The authors indicate they are. This is not true. Spiders in the family Uloboridae, common in North America, lack venom glands. Lastly, there are some common English names for certain spider species or genera that were apparently created just for this book. There is no such thing as a "Ceiling Spider," even though I would endorse that name for Cheiracanthium species because that is exactly where you encounter them.

Enough nit-picking. The "up sides" of this handy volume are much more numerous. It is a paperback, and of a size that is large enough to not lose easily in a stack of other books, and comfortable to handle for those of us who are all thumbs. Again, the text is a joy to read. Spicer and Buddle manage to give each spider a personality that reflects its biology. This style comes close to anthropomorphism, but I am all in favor of whatever it takes to win more arachnophiles. Spiders need all the friends they can get in Humanland.

One of my measures of the goodness of a book like this is whether it teaches me, a longtime naturalist, something new. This book did that, in spades. I love being surprised with new knowledge, and with that I heartily recommend Dr. Eleanor's Book of Common Spiders.