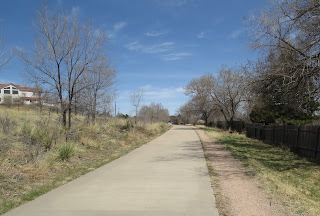 Back in 1962, the Beach Boys took us on a "Surfin' Safari." I want to take you on a "sidewalk safari." Spring is the ideal time to do just that: look for insects and spiders and related creatures on sidewalks and bike paths and other such pedestrian-speed rights of way. 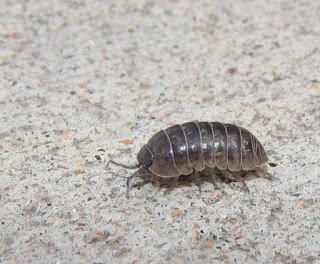 Woodlice are common on sidewalks

At this time of year, temperatures are still relatively cool, especially in the morning hours, so cold-blooded creatures are looking for places they can bask to rev up their internal engines. A concrete or asphalt surface also heats up faster than the soil, so simply laying out on such a substrate is going to warm you up a lot faster, too. A "billbug," a type of weevil

You might think that your particular neighborhood would be a poor place to do this exercise, but I cannot tell you how many times I have found surprising specimens in even the most urban situations. When I lived and worked in Cincinnati, Ohio in the 1990s, I would routinely find underwing moths, sphinx moths, grasshoppers, even dragonflies on the sidewalk or on the exterior walls of buildings. I even found a Red Bat once. A Silver-haired Bat another time, and Big Brown Bats several times. 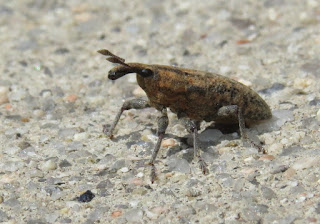 Ooooh, some other kind of weevil

The more suburban or rural, the more likely you are to encounter wildlife, of course, but it can be well worth it to traverse any avenue. Bike trails are perhaps best because you can go for miles and miles, and because they are often routed through forests or along the banks of rivers or streams. The wilder the habitat the better. 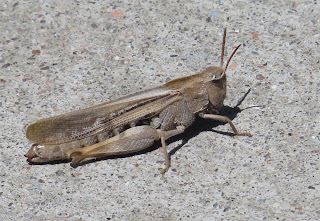 A basking female Green-striped Grasshopper soakin' up some rays

One of the unfortunate aspects of a sidewalk safari is that you inevitably come across dead creatures that have been stepped on, sometimes deliberately, or run over by bicyclists. The carnage that results from our high-impact locomotion is probably grossly underestimated, but it rarely seems to diminish insect abundance. Diversity may suffer a little more, though. It would be interesting to line a bike path or sidewalk with pitfall traps and see what drops in. It might make a great study for a graduate student (hint, hint). 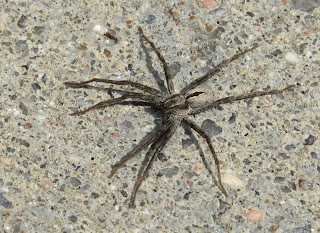 Take along your magnifying glass. Substitute binoculars if you fancy birds or mammals more than you do six- and eight-legged organisms. Bring your camera or just use your phone. Wildflowers, also known as weeds in some regions, often line hard surface trails or sprout from the cracks between slabs of cement, or from seams in the asphalt. 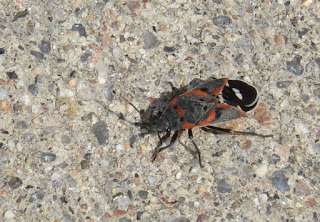 Lots of true bugs out now, like this Small Milkweed Bug

Did I mention that walking is great exercise, too? It is a wonderful distraction from your worries and cares, a great way to commute if you live close enough to your workplace; and what better way to spend your lunch hour? Looking for wild things is also a great conversation-starter, with the police. I'm joking! Hopefully, anyway. Inquiring minds want to know what you are doing, mostly out of curiosity rather than suspicion. Now go, get out from behind your computer monitor already. I promise you will find something cool. 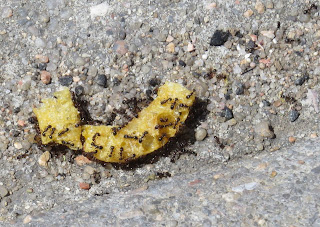