It was my honor to be invited to give a presentation and participate in "bug walks" with the Austin Butterfly Forum in Texas from April 22-24. Special thanks to Mike Quinn for extending the invitation, and to Dan and Linda Hardy for hosting Heidi and myself at their lovely home. We were fortunate to have agreeable weather there, though we left Colorado Springs with snow on the ground and returned to more flurries. 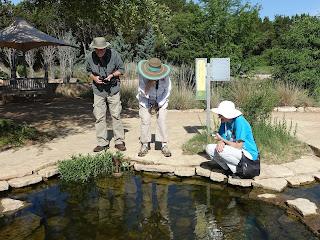 The turnout for all of the scheduled events was impressive considering that we were looking for insects rather than birds. The Sunday outing included people who drove from as far as Houston to spend about half a day with us. The Monday evening meeting, held at the Zilker Botanical Garden, was likewise well attended, and select ABF members furnished refreshments. You do not go hungry or without entertainment in Austin, at least if the ABF has anything to say about it. Let us start from the beginning, though. 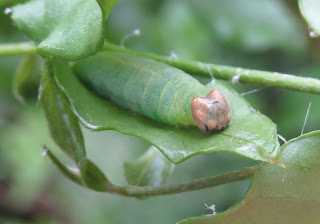 Heidi and I arrived early afternoon on April 21, and Mike Quinn whisked us off for some vittles at Threadgill's, an Austin landmark packed with music memorabilia of rock and country genres. The weather was humid with intermittent drizzle, but we went to visit the Zilker Botanical Garden anyway. This lush park is full of all manner of native and exotic plants, landscaped in a manner that was bird- and bug-friendly. We found several caterpillars, true bugs, beetles, and butterflies despite the overcast skies. 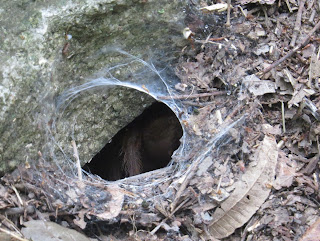 We then went next door to the Austin Nature and Science Center and the Zilker Nature Preserve behind it. We quickly spotted a Diamondback Watersnake digesting a recent meal on an island in a small pond. One of the naturalists who was leaving for the day described a vireo nest in the preserve, and sure enough we were able to locate that, too, but not before finding a tarantula in her silk-lined lair. The vireo nest looked like it was holding a recently-hatched Brown-headed Cowbird, much to our disappointment. 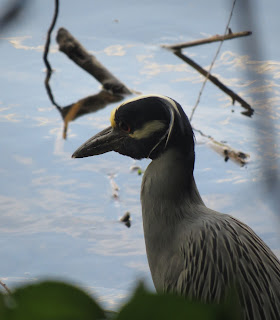 By now we were killing time until the famous bat flight from beneath the Congress Avenue bridge in downtown Austin. Walking along the river we found a few more birds, including a Yellow-crowned Night-heron stalking the shady shore. After a quick bite at Freebirds World Burrito, we were ready to witness the spectacle of over 500,000 Brazilian Free-tailed Bats exiting their haunts from beneath the bridge. We were not disappointed. 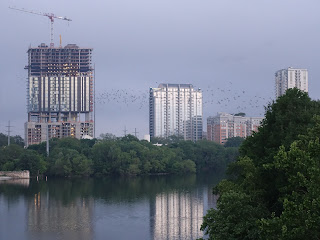 Bats exiting from under the bridge. © Mike Quinn
About twenty minutes after sunset, they started streaming from the southern end of the bridge, followed eventually by others farther north. Please go see it for yourself, from both the bridge and from a boat or kayak. There are even commercial boat cruises specifically for this purpose. 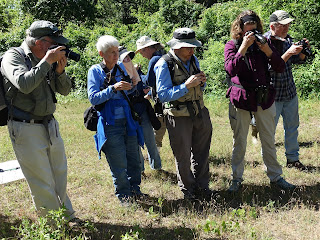 Something has our attention at Brackenridge Field Laboratory
© Mike Quinn

Sunday morning we convened with other members of Austin Butterfly Forum at Brackenridge Field Laboratory. Several buildings, greenhouses, and uncovered water tanks occupy the property, but there are also acres of undeveloped property that we prowled for insects. The most startling and exciting organism we encountered was a coral snake, right on a paved path. 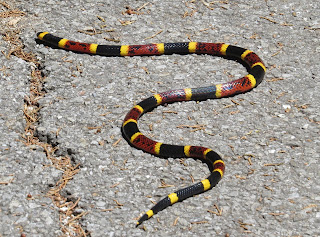 After a pizza lunch delivery, we toured the insect collection, a sizeable holding of preserved specimens. They had just received a donation of butterfly and moth specimens that have yet to be integrated into the larger collection. Lastly, we looked in on a greenhouse containing live tropical longwing butterflies (Heliconius and related genera). It was much like the commercial butterfly houses one pays to visit, but with a scientific purpose to analyze genetic lineages in these insects. Some specimens were easily recognizable as a particular species, but others were obvious hybrids.

After lunch, Heidi and I retired to our host's home, where I explored a greenbelt ravine behind their property. The "hill country" is crossed by streams that erode the limestone rock that gives the landscape its topography. Live oak is the dominant tree, but there is a good diversity of vegetation. It is a distinctly arid habitat, but southerly enough in latitude to get animals like anole lizards and, unfortunately, fire ants. 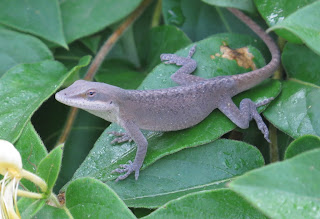 Monday morning found us strolling along the Barton Creek Greenbelt Trail, west from the Barton Springs Municipal Pool, a popular swimming hole. There were plenty of butterflies and other insects to be seen, including the ever-present Southern Dogface, Pipevine Swallowtail, and Gulf Fritillary. We did manage a splendid White-striped Longtail skipper, which was only the second specimen I'd ever seen. 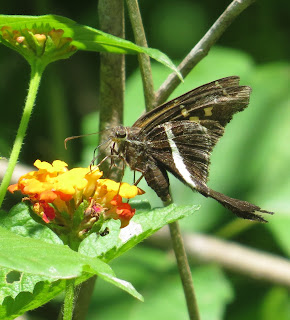 We were eventually able to access the nearly dry creekbed, where Heidi spied a local rarity: a Filigree Skimmer dragonfly. 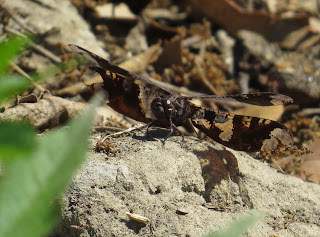 Filigree Skimmer along Barton Creek
There were a handful of other dragonflies, and many damselflies, too. Heidi also pointed out a couple of Six-spotted Fishing Spiders waiting in ambush at the edge of one of the puddles now making up Barton Creek. 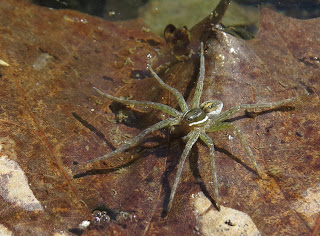 The riparian trees are full of birds, and we got to see a White-eyed Vireo collecting spider silk to line its nest. Northern Cardinal, Northern Mockingbird, and Great-tailed Grackles were among the most obvious birds here and within Austin as a whole, at least during our brief visit. 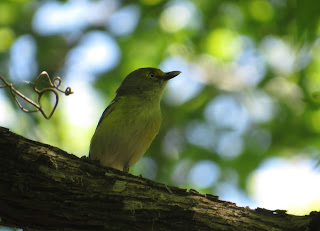 Between lunch and dinner I did a bit of exploring in Dan and Linda Hardy's backyard, which is mostly wild, native vegetation and the occasional deliberately installed plant, like "Antelope Horns," a type of milkweed. As luck would have it, it was in partial bloom, and crowded with three Gray Hairstreak butterflies and one gorgeous green Juniper Hairstreak. 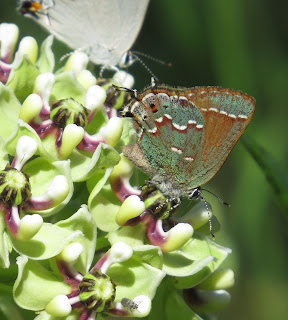 A Springtime Darner dragonfly eluded my attempts to get its picture, and the large, red paper wasps were almost equally good at hiding as they hunted for other insects. I was, however, able to repay our host's hospitality, at least in part, by recording the first Banded Hairstreak butterfly in his yard. I hope he has since been able to find one for himself. 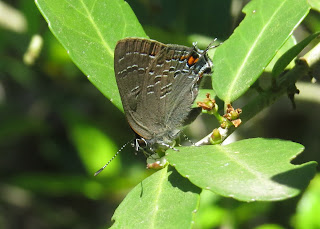 My after dinner presentation "Beyond Birds: the Joys of Bugwatching" was apparently well received, and afterwards I signed copies of the Kaufman Field Guide to Insects of North America for several appreciative folks. 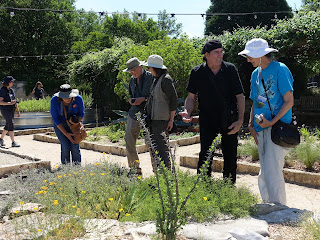 Enjoying Lady Bird Johnson Wildflower Center
© Mike Quinn
Tuesday morning found us at the Lady Bird Johnson Wildflower Center, an epic tribute to Texas flora on 284 acres. There is an ongoing invertebrate survey that has, to date, recorded 93 species of butterflies alone at the site. All wildlife is welcome, and our particular visit coincided with the presence of fledgling Great Horned Owls right at the entrance to the whole park. 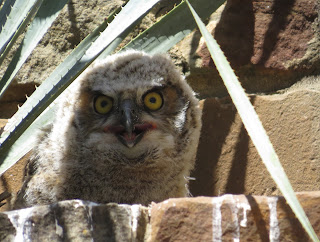 After lunch, before our departing flight, Mike took us to Hornsby Bend, a wastewater treatment and research facility that includes large retention ponds frequented by birds and other wildlife. We saw many shorebirds there, as well as Painted Bunting and, finally, a pair of Scissor-tailed Flycatchers as we were exiting. It was a fine conclusion to an exciting, memory-filled trip. Thanks again to everyone who made it possible. 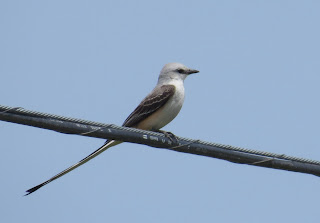 Scissor-tailed Flycatcher at Hornsby Bend
Posted by Bug Eric at 8:37 AM