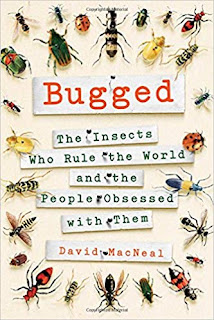 Well over a year ago, someone at St. Martin's Press contacted me by e-mail asking me to review David MacNeal's latest effort, Bugged: The Insects Who Rule the World and the People Obsessed with Them (2017, St. Martin's Press, 297 pp). They would hardly take no for an answer, sent me an advance uncorrected page proof, and so finally, here is my assessment, colored by the circumstances of my receipt of the book, my lack of familiarity with MacNeal's previous works, and my personal biases, which I will reveal honestly.

First, my sincerest compliments to the author for his most thorough research, his diligent reading of numerous books and scientific papers, and in-person visits with the human subjects highlighted in Bugged. Whatever shortcomings the book may have, the foundation it was built on is as solid as they come. Additionally, I can say that in my opinion the book gets markedly better the farther the reader gets into it. Unfortunately, I found the first one-third to two-thirds of the book to be an exercise in the author's ego, perhaps due to my own peculiar style that I prefer to write in, and the approach to the subject that I would rather read.

The chapters reflect an overall theme that I am personally averse to: that in order to validate their existence, all non-human organisms must prove they have an economic value to humanity.

MacNeal may simply be trying too hard in the first chapters to convince the reader that he is edgy, funny, irreverent, intellectual, and jet-setting. It comes off as self-centered in my opinion, and aimed more toward those who value shock-and-awe prose. I prefer that an author remove themselves as much as possible from non-fiction, save for memoirs and autobiographies. I personally try to get out of the way of the story when I am writing myself, unless my direct experience is the story. I see no need for profanity ever, not because I am opposed to it, but because I think it can be a distraction if not a detraction from the rest of the words used. I do not try and paint myself as intellectually superior by throwing around words and phrases from foreign languages.

The choice of categories that define the chapters was predictable: Insect specimens as novel merchandise, social insects as a parallel to human societies, insect and spider sex lives, insects as disease-carriers, the pest control industry, insects in forensic science, insects and other arthropods as the source of inventions and advancement of technology, insects as live entertainment in Asia, entomophagy (intentional human consumption of insects as food), and honey bees as perhaps the most important of all insects (to mankind).

The chapters reflect an overall theme that I am personally averse to: that in order to validate their existence, all non-human organisms must prove they have an economic value to humanity. Maybe MacNeal recognizes this and is planning a sequel that will visit topics like endangered insects and the people working to save them, the economic impact of "ecological services" provided by insects and related invertebrates, and the myriad of citizen science projects available for his readers to participate in and become active contributors to science instead of passively entertained by his books. MacNeal does give a nod to ecological services, as almost literally a footnote (another aspect of books that I find distracting and mildly irritating); and he lists a few conservation organizations in the acknowledgements at the end of the book.

The bottom line is that I am glad the book was written, but I would have preferred that someone else had written it. If you enjoy this brand of storytelling that focuses on both insects and people, you may be better off reading works by Richard Conniff or Sue Hubbell.

Does MacNeal succeed in recruiting a new generation of entomology-appreciators? Hard to say. I think it takes actual in-person engagement with scientists to achieve that, and I hope that Bugged encourages readers to take that next, crucial step toward a better understanding of invertebrates in general, and an appreciation of those people, not the eccentrics you presume them to be, who make a living in the science of entomology.