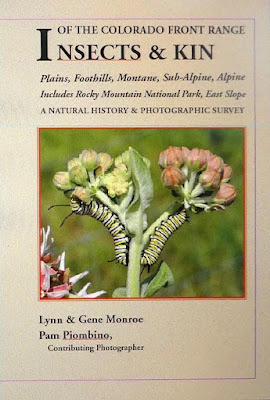 If you live along, or frequently visit, the eastern slope of the Rocky Mountains, and are excited by this title, please curb your enthusiasm. This is the anvil you probably want to avoid: 1,104 self-published pages of “a natural history & photographic survey,” part of the lengthy subtitle. Ideally, natural history books should be “how can I help you?” exercises. This is a “look at what we did” book.

Lynn and Gene Monroe are authors of two other specific and obscure books, Desert Insects & Kin of Southern California, specific to Anza-Borrego Desert State Park, and Butterflies & Their Favorite Flowering Plants, also specific to Anza-Borrego. The common theme here is the assumption that one can extrapolate to surrounding environs. On page one of Insects & Kin of the Colorado Front Range, the authors state: “The scope of this book is the Front Range region mainly in Boulder and Larimer Counties and east of the Continental Divide….However, the insects and their kin that are considered here would be expected to also be found elsewhere along the Front Range….” As one who has lived in Colorado Springs and explored farther south, I can say with some authority this is simply not true. Even residents of Denver are not fully served.

A number of common and/or eye-catching species, especially among the beetles, are absent from this book because they were not found by the Monroes at their favorite sites, most of which appear to be outdoor recreation destinations and other sites they visited regularly.

Pam Piombino is the contributing photographer to this project, and the book is lavishly illustrated. Unfortunately, that translates to “many images are redundant.” Further, the print quality is inconsistent in its ability to bring out fully the details in the images. Many images are too dark to be of much value. Some images of very small insects are out of focus, or appear to be.

The organization of the book is somewhat haphazard, in that material one would expect in the front of the book is instead part of the back matter. There are some spelling and grammatical errors. Eight insect orders are covered in depth, the remainder not given their due. Under the discussion of the jumping plant lice (psyllids), there is an image of a barklouse, an insect in a completely different order. Such obvious errors, however few, make an entire work suspect.

Because there are so few popular, contemporary treatments of insects and other invertebrates, it pains me to be writing a poor review of this one. Certainly, it is not wholly without merit, and could serve as a solid, if slightly unwieldly, introduction to Rocky Mountain fauna. Overall, however, the impression one gets is that this is a book of privilege, literally born in retirement by authors who can afford to live away from the urban and suburban centers composed of the people they should consider to be their audience. That is not to say that I do not respect and admire what the Monroes have accomplished, but I would sooner recommend two other works: Guide to Colorado Insects (Westcliffe Publishers, Inc., 2006) and Bagging Big Bugs (Fulcrum Publishing, 1995), both by Whitney Cranshaw and Boris Kondratieff.

The best thing about this book is that the proceeds of sales go to benefit the Granite Ridge Nature Institute in Chapel Hill, North Carolina. It is for that reason that it is a pity there were only 250 copies of Insects & Kin of the Colorado Front Range printed. Inquiries for purchase should be addressed to Lynn Monroe, lynnmon35ATgmailDOTcom.