Between allergies to grass pollen, windy and/or stormy weather, and periodic depression, I have not been getting out in the field very often lately. Consequently, I was delighted when an unusual insect came to me. Leaving our bathroom for our bedroom the other night, I caught movement out of the corner of my eye. A small insect was running along the edge of the bathtub. My initial thought was "oh, shoot, a cockroach nymph." Closer examination revealed it to be something much more exciting and not at all a pest. 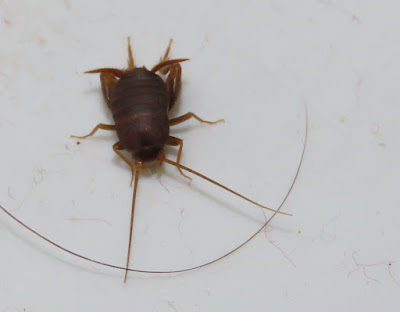 It was an adult male Eastern Ant Cricket, Myrmecophilus pergandei. How it came to be in our bathroom I have no idea. This species, like others in its genus, is supposed to be found almost exclusively in association with ants. Ironically, ants may consider these diminutive crickets to be pests inside their colonies. 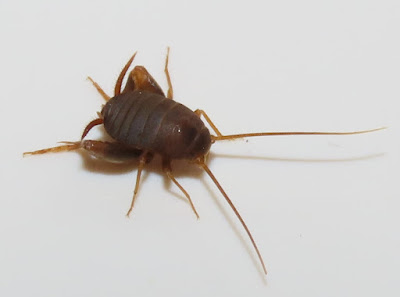 Myrmecophilus have been observed actively "licking" ants, and the walls of underground ant nests, presumably feeding on oily secretions from their hosts' exoskeletons. The ants barely tolerate this unwanted attention, and may attack or even kill and eat the crickets. Still, the cricketes are remarkably agile, able to run away quickly from danger. I was surprised that I managed to successfully usher this one into a vial so I could take better images in the casserole dish that is our "studio" for insect and spider subjects. 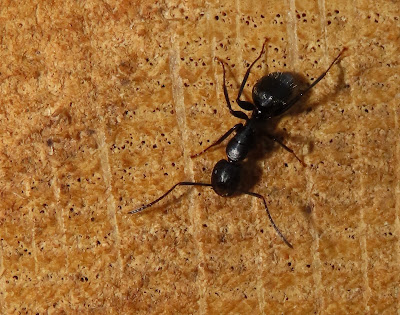 Carpenter ant, a potential host species for our ant cricket

Ant crickets vary in size, usually in accordance with the host ant species, but none exceed 4.7 millimeters. The smallest adult specimens recorded measured less than 1.5 millimeters.The one imaged here is a relative giant. I suspect it may have come from a nest of carpenter ants, of which we have several around our home, one satellite nest in the frame of our back door, not terribly far from the exterior wall of the bathroom. 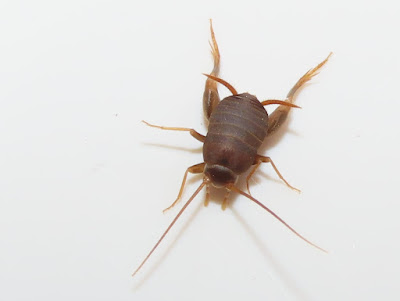 Among their adaptations to life in subterranean ant colonies, ant crickets have no ocelli (simple eyes), and their compound eyes are reduced to a small collection of facets. What they lack in vision they make up for with long, sensitive antennae. They also have oversized cerci, the pair of flared, tail-like appendages at the rear of the abdomen. The cerci are covered in sensory hairs that, as in roaches, other crickets, and related orthopterans, detect otherwise imperceptible air currents generated by approaching predators. 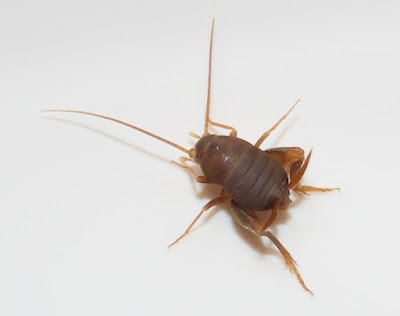 Eastern Ant Cricket is found from Maryland south to Florida, and west to southern Iowa, eastern Kansas, Oklahoma, and Texas, but there are recent records from New York and New England. There may be other species where you live. Oregon Ant Cricket, Myrmecophilus oregonensis, ranges west of the Cascade Mountains from southern British Columbia through Oregon and Washington, and most of California. Mann's Ant Cricket, M. manni, has a similar range, but from southern Washington state through Oregon, California, most of Nevada, and Arizona. Nebraska Ant Cricket, M. nebrascensis, occurs from southern California to Texas, and north through eastern Colorado, and most of Nebraska, Kansas, and Oklahoma.