I am seeing a theme developing here. Last week I posted about a lovely little red spider I found in our back yard. Today, I bring you a slightly larger red spider that I spied at Graham Cave State Park in Missouri, USA. This one, Hypsosinga rubens, is an orbweaver, but because it spins its web in a horizontal plane, I initially mistook it for a female of the Scarlet Sheetweb Weaver. 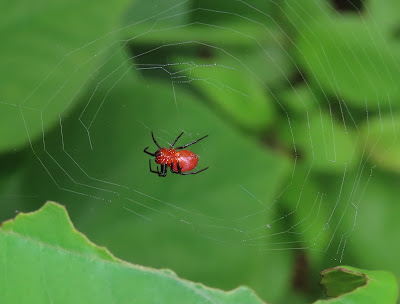 A friend who was with me at the time I saw this diminutive beauty commented that she sees them all the time, and calls them "tomato spiders" because of their bright red color. Well, at only 7.4-8.7 millimeters in body length, maybe *cherry* tomato spider is a better name. The only common name I find is Rubens Orbweaver. Males of this species are smaller still, 6-6.5 millimeters, and they usually have a black abdomen. 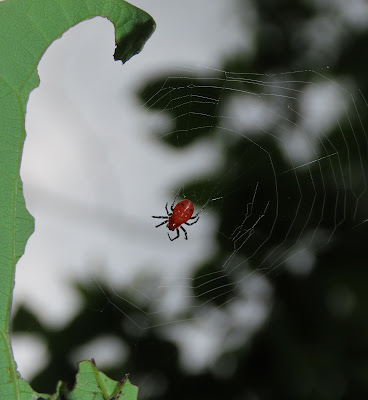 There is great variability in color and pattern, or lack thereof, and a typical female from Florida has a white abdomen with small black markings. The Rubens Orbweaver occurs over most of eastern North America, but there are scattered records from the Prairie Provinces in Canada. 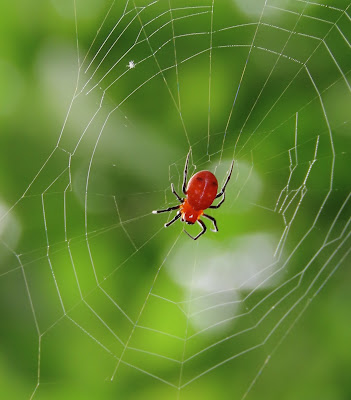 Beyond the bright color of this spider, the thing that surprised me was how ridiculously small its web was, stretched between a couple of leaves on a shrub at a little over waist-height. I expected her to drop out of the web if I approached too close or moved suddenly, but she stayed put in the hub of her snare. Information in the literature indicates that they may also shelter under bark on trees, or tuck themselves under leaf litter. I found mine along a forest edge, and forests are their preferred habitat. 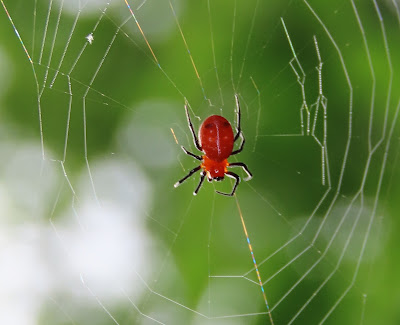