’Tis the season for sugar plum fairies, but I have been delighted to find the insect equivalent of those mythical figures among the specimens in the emergence trap and pitfall trap samples I’ve been sorting through the last six months.

The so-called “fairyflies” are actually ultra-tiny parasitic wasps in the family Mymaridae. They are among the very smallest of insects. Members of one genus check in at a mere 0.18 mm. As larvae, all mymarids are egg parasites of other insects, including aquatic ones in some cases. That might account for their presence in the emergence traps which were floating on the surface of water in various wetland habitats.

The most amazing feature of these diminutive hymenopterans is their wings. 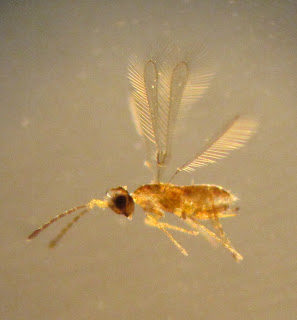 Paddle-shaped with no veins, they are also fringed with long hairs. The hind wings are stalked, and this is one character used to identify them.

There are 120 species of fairyflies in North America, in twenty-eight genera. Most are well under two millimeters long. I had never seen them before I started looking at the pitfall trap samples. I initially dismissed the specimen below as something other than a mymarid because it was relatively huge for that family, about three millimeters or so. 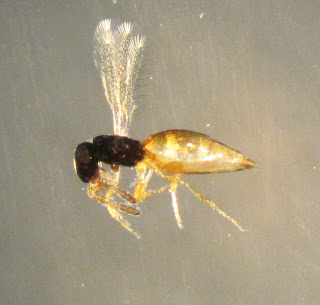 It has been a joy to learn that the world of microscopic insects and arachnids is just as enchanting and beautiful as the macroscopic world of arthropods that are over five millimeters. Happy holidays, folks; may you, too, find happiness in small packages.