Last Monday, April 19, I was asked to help at an educational event presented by a local organization known as the Sonoran Arthropod Studies Institute (SASI for short). Emily Francis, John Rhodes, Barb Skye, and myself entertained four busloads of third and fourth graders from the Hopi Elementary School in Scottsdale, Arizona. We all convened at a ramada (shelter) in Reid Park near the center of Tucson. 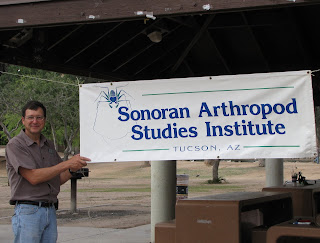 John Rhodes (pictured above), a retired teacher, furnished many live insects, spiders, scorpions, and other invertebrates from his personal collection. He has some of the healthiest, most magnificent arachnids and insects I have ever seen in captivity, like the bark scorpion (Centruroides sculpturatus), vinegaroon (Mastigoproctus giganteus), and cactus longhorn beetle (Moneilema gigas) pictured below. 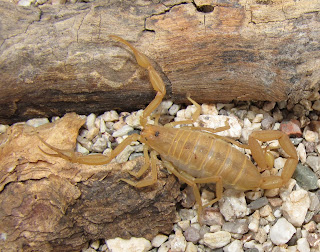 SASI was founded in 1986 as a non-profit organization by Steve Prchal. Its headquarters is located within Pima County’s Tucson Mountain Park, just west of Tucson. The facilities, which mostly serve researchers, include a pinned collection, library, live specimens for educational outreach programs, and 350 acres of classic Sonoran Desert landscape. 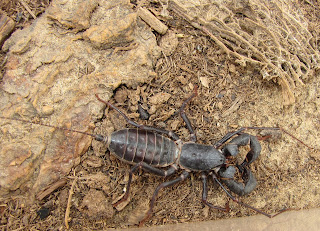 The program for which SASI is best known is the annual Invertebrates in Education and Conservation Conference, held in Rio Rico, Arizona at the end of July, beginning of August. This meeting, formerly known as the Invertebrates in Captivity Conference (informally as “Bugs in Bondage”), attracts keepers and managers from live invertebrate exhibits in zoos and butterfly houses all over the world. A second conference, Medical Entomology Today, will have its debut in January, 2011 in Tucson. 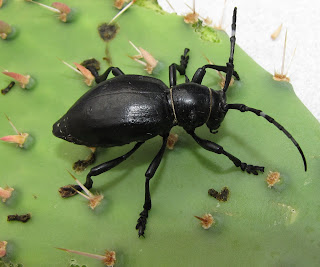 Back to the Hopi Elementary event. A total of 140 children and adults enjoyed the many cool critters displayed, and hands-on activities, as well as a pizza dinner. This was the last stop on a one-day, whirlwind tour that included Biosphere II and the Arizona-Sonora Desert Museum. I was amazed the kids had any energy left. The adults did a most outstanding job of herding the students, who were back on the buses before we could blink. Many thanks to all involved for making the ninety minutes go off without a hitch.

Perhaps you would like to learn more about SASI? Please visit them at sasionline.org, and also at their “fan page” on Facebook. You can also direct questions here if you like.