The title above is not a noun and a verb, but the common name for the family Bombyliidae. Bee flies get that name from their obvious resemblance to bees, but it is a diverse family and not all of them are covered in fuzzy hairs or iridescent scales. Their life histories are likewise variable, and for most species are unknown. At least 800 species occur in North America north of Mexico. More await naming and description by scientists. 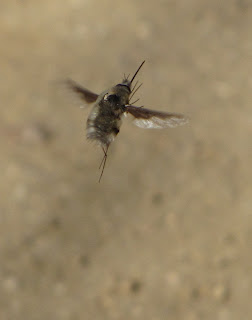 Spring is a great season to see bee flies. Look for them in open areas on sunny days, or even sunny spots in wooded areas. Many species, like the “greater bee fly,” Bombylius major, shown above, hover so perfectly as to appear to be levitating. Male bee flies in particular exhibit this behavior, perhaps defending small territories or displaying for females. You might easily hear one of these flies before you see it.

Many bee flies have elongated mouthparts, causing some people to fear them as blood-suckers. The proboscis is for probing flowers for nectar, though, and the flies are totally harmless to people and pets. Bee flies are probably mostly “flower visitors” rather than pollinators. 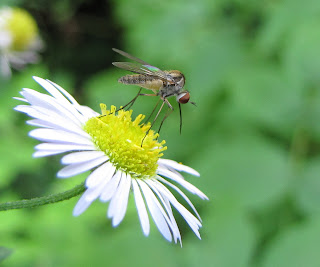 The larval stages of bee flies are definitely not harmless to other insects, and this makes them beneficial allies in the war against pests. At least some members of the genus Geron, shown above on an aster in western Massachusetts, are parasites of the caterpillars and/or pupae of bagworm moths in the family Psychidae. Bombylius major, a widespread species illustrated near the top of this article, is somewhat less helpful. Its offspring are parasitic in the nests of solitary bees that nest in the soil. This and related species are known as “bombers” because the female will hover over the entrance to a bee’s burrow and lob eggs into it with a flick of her abdomen. The larvae that hatch then seek out the host bee’s larvae, becoming external parasites upon them. 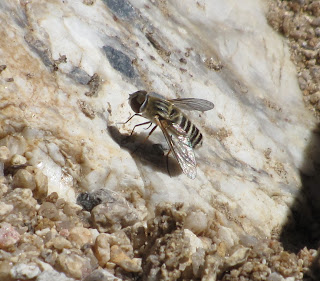 Members of the genus Villa, like the unidentified specimen from Arizona pictured here, are villains only to caterpillars of butterflies and moths, again functioning as parasites in the flies’ larval stages.

Larvae of Hemipenthes are hyper-parasites. That is to say they are “parasites of parasites.” They live as parasites of the larvae of ichneumon wasps, tachinid flies and other insects that are themselves parasites of caterpillars of butterflies and moths. How bizarre is that? I photographed this Hemipenthes eumenes (below) a little over a week ago here in Arizona. 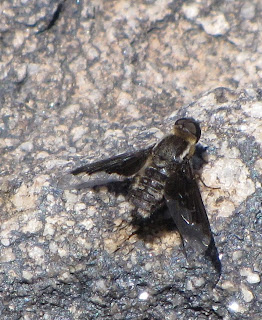 Try looking for bee flies yourself next time you are out and about. You might also surf the ‘net to get a feel for what they look like. Start by browsing the images BugGuide.net for a great overview of the North American fauna. See more stunning images from all over the world at this Flickr search. You’ll be amazed by the beauty of these delicate insects.