Sand wasps have to be among the most industrious of all insects. I was reminded of that back on June 18 when I encountered a female of Steniolia elegans digging a burrow in the middle of the Oracle Ridge Trail on Mount Lemmon in the Santa Catalina Mountains just north of Tucson, Arizona. 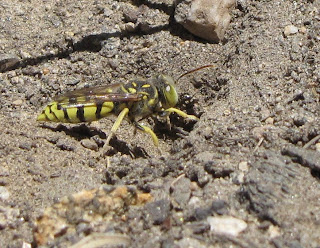 This ornately-marked insect is a member of the family Crabronidae (older references have them placed in the family Sphecidae), a group of solitary wasps. There are collectively fourteen species in the genus Steniolia in North America, all of them western in their geographical distribution. Four occur only as far north as Mexico. There is a lot to like about them. They hunt flies for one thing. The female exhibits parental care, too.

While each female digs her own burrow, usually in dry, powdery soil rather than sand, many females may nest in close proximity to one another. The burrow terminates in a single cell at a depth of 7-17 centimeters underground. The female covers the burrow entrance while she is away hunting prey. She uses subtle landmarks to help her find it again upon her return. Meanwhile, we can’t remember where we parked the car.

Steniolia elegans hunts mostly bee flies (family Bombyliidae) and flower flies (family Syrphidae) as food for her single larval offspring. Once she subdues a fly, stinging it into paralysis or even killing it outright, she takes the victim into her burrow and lays an egg on it. The larva that hatches then begins eating the fly. The female wasp goes hunting again, bringing flies to the developing grub throughout its life. This is called “progressive provisioning,” much like what birds do in feeding their nestlings. 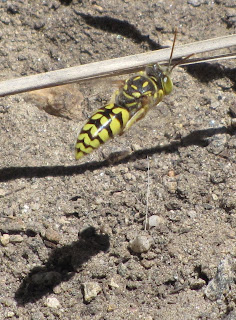 Once the larval wasp ceases to feed its mother closes the nest burrow a final time and departs to begin another nest. The grub then pupates, emerging as an adult wasp weeks later (or months if it is overwintering).

Members of the genus Steniolia also engage in a strange nightly ritual. Both genders can come together to form dense, spherical sleeping clusters. Mating apparently takes place at these “slumber parties,” which disperse again at daybreak.

These wasps are not without their enemies. Satellite flies, mentioned in last week’s installment of Wasp Wednesday, plague these wasps, too. Velvet ants (which are actually wingless female wasps) will dig open the burrow of a sand wasp and lay an egg of their own in the burrow. The larval velvet ant then consumes the larva of the host wasp, after the host has finished feeding itself. A cuckoo wasp, Parnopes edwardsii, behaves similarly as a parasite.

Look for male Steniolia at flowers like thistles where their long, tongue-like mouthparts can reach nectar buried deep. Females visit flowers also, but are mostly busy nesting and hunting. Steniolia elegans ranges widely in the west, from southeast Washington state, Idaho and Wyoming south through much of Mexico. 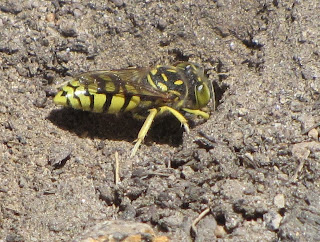 Alas, this particular specimen I imaged eventually gave up on digging her burrow. It might have been for the best as the trail gets a lot of recreational human traffic.