On the morning of May 8, 2010, I was looking for insects in my immediate neighborhood in midtown Tucson, Arizona. The weather was partly cloudy, and relatively warm as I recall. Walking up a residential street, something hanging from the stem of a Desert Marigold flower caught my eye. Much to my surprise it was a female wasp in the genus Dryudella, and she had prey. 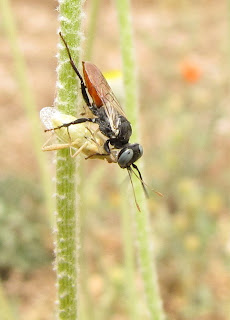 Up until this point I had never seen a female in this genus of wasps, members of the family Crabronidae. I had only collected less than half a dozen males in thirty some years. They are not large, and this female was probably less than ten millimeters.

Solitary by nature, the ten North American species in the genus belong to the subfamily Astatinae, collectively known to prey on “true bugs” in the order Hemiptera. Little more is known of their biology. Females are fossorial, meaning that they dig nest burrows in the soil. Our species in the U.S. and Canada are almost completely restricted to the western portions of the continent where they frequent arid habitats.

Males differ graphically from females when it comes to their eyes. The eyes of male Dryudella are holoptic, meaning they wrap around the face and meet at the top of the head. They use that extraordinary field of vision to detect females and rival males from perches at the tips of twigs and branches of shrubs and weeds. Their hind wings are also much broader than those of the females, and they are able to fly amazingly fast. Watch one and it will dart at warp speed from its perch, in pursuit of some target, only to return just as quickly, as if it had perfected time travel.

The female I found was apparently resting, and who could blame her. Here she was lugging a paralyzed scentless plant bug (genus Harmostes) which she carried beneath her. She wobbled. 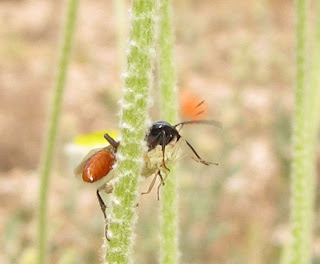 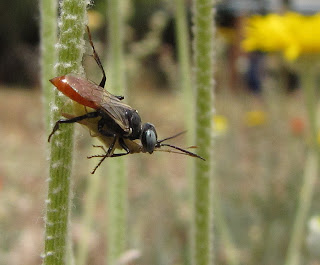 She finally flew off, but not before I got a nice series of images of her. I am not certain whether this documents a new host (prey) record or not. Dryudella is not as specialized in its prey selection as other genera in the Astatinae subfamily. Recorded prey includes assassin bugs, negro bugs, stink bugs, shield bugs, seed bugs, burrower bugs, broad-headed bugs, and scentless plant bugs. Both adults and nymphs may be used as provisions for the offspring of the female wasp. 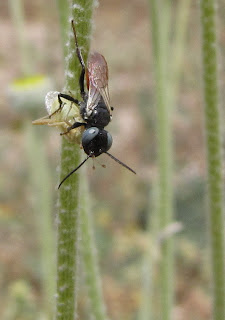 Blue-eyed wasps. Who woulda thunk it? Being observant has its rewards, and carrying a camera helps preserve those moments as well as provide evidence of behaviors and ecological relationships that might not yet be known. I’m hoping this particular wasp was successful in raising another generation. She sure was working hard….