It is always a challenge to select a wasp to profile on “Wasp Wednesday,” in part because there are so many to choose from, but also because I don’t have that many images of wasps…yet. I was thrilled today (August 31, 2010) to find an unusual and wonderful wasp to profile, right at my workplace at the Tucson Botanical Gardens. Right there inside the tropical greenhouse were flitting little ensign wasps. 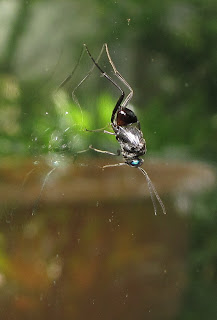 Ensign wasps of the family Evaniidae get their common name from the tiny, flag-like abdomen that they habitually “wave” as they walk. They have a start-and-stop gait, bobbing their abdomens as they go.

Globally, evaniids are represented by 20 genera and 435 species. There are eleven species in the family Evaniidae in North America north of Mexico, in four genera. Two of those species are not native, and one of those immigrants is the one in the greenhouse at the Tucson Botanical Gardens: Evania appendigaster. It is large for an evaniid, adults measuring up to eleven millimeters in body length. Perhaps the most striking feature of the insect is its bright turquoise compound eyes, at least in living specimens. 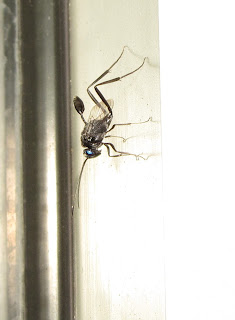 Evania appendigaster may be native to Asia, but is widespread in tropical and subtropical regions. Here in the U.S. it is exclusively associated with urban areas, and mostly inside buildings. There is good reason for this strange habitat. This species is a parasite of the egg capsules of cockroaches. Its hosts include the American Cockroach, Periplaneta Americana, Australian Cockroach, P. australasiae, and Oriental Cockroach, Blatta orientalis. Those roaches are also aliens to North America, probably having crossed the Atlantic Ocean on slave ships from Africa.

The first U.S. record of Evania appendigaster (it has no common English name, sorry) was probably on June 5, 1879, from Washington, DC, as represented by a specimen in the collection of the Smithsonian Institution. Today, this species is most common along the Atlantic Seaboard and the Gulf Coast, as well as here in Arizona. 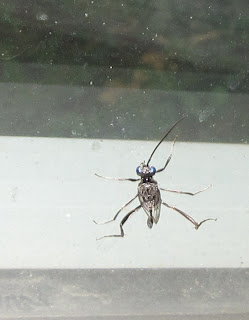 What is the life cycle of this wasp? Females search for the egg capsules (oothecae) of the roaches. Once it locates a capsule, the female wasp inserts her ovipositor into one of the eggs in the package and lays her own egg. She then departs in search of another ootheca. Her egg eventually hatches inside the roach capsule and the larva that emerges then consumes the cockroach eggs. It eventually pupates and the adult wasp chews its way out of the roach ootheca a week or so later.

I have observed the adult wasps feeding on honeydew secreted by aphids, like here on a cottonwood leaf in the Sweetwater Wetlands in northwest Tucson. Indoors, perhaps they will feed on spilled beverages? Who knows? 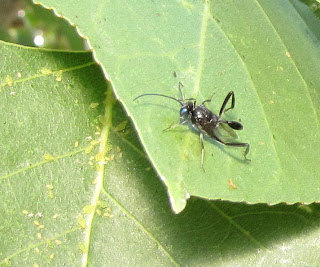 Excellent images and phylogenetic information can be found at the Tree of Life Web Project, courtesy of Andrew R. Deans. Deans is also the driving force behind another internet project, ”Evanoidea Online”. This resource covers not just the Evaniidae, but also related families of equally interesting wasps. There are also “keys” at that website that allow you to identify the North American Evanoidea.

Ensign wasps are not commercially available for cockroach control, at least to my knowledge, but it might be a venture worth considering. I know that I would sooner employ a non-toxic, mobile pest-control device to eradicate roaches instead of reaching for some kind of chemical at the local hardware store. The wasps are far more engaging, too.